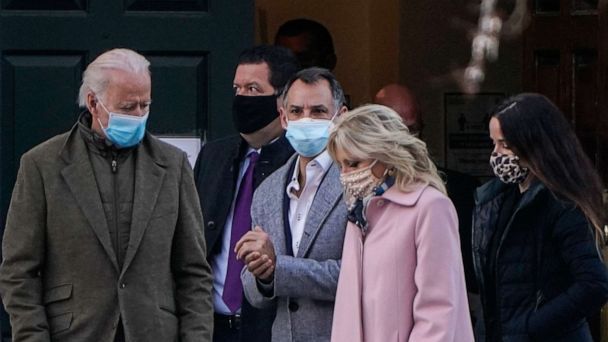 Interesting to compare MSM articles and positions on the two most recent Presidents.  We can already see a difference in how the Lead-in title and approach to a possible ethics issue is framed as compared to the previous administration.  Likely the last time you will hear about this, so take note.

As posted on Yahoo news:

When the boutique tech firm Yosi Health developed software aimed at streamlining the nation’s coronavirus vaccine effort, CEO Hari Prasad sought help from one of its earliest investors — a company with a special government connection.

The investor was StartUp Health, and that special connection came through its chief medical officer, Howard Krein, who is married to President Joe Biden’s daughter.

That detail that was not lost on Yosi’s Prasad, who reached out to StartUp Health in December with a request to introduce their platform to government health officials.

“Our goal with StartUp Health is to leverage their relationships and work with state and federal agencies,” he explained in an interview with ABC News.

During the 2020 presidential campaign, attention on the Biden family focused largely on his son, Hunter Biden. But experts say it is the president’s son-in-law who could present fresh ethical challenges for the new administration.

“Howard Krein is playing with fire,” said Meredith McGehee, the executive director of Issue One, a nonpartisan ethics watchdog group. “If he gets too close to that flame — if he is trying to either cash in on his relationship with the president, or he is trying to influence policy — the flame is going to get him. And it is not worth it to him or to Biden.”

A renowned Philadelphia-based head and neck surgeon who married Biden’s daughter Ashley in 2012, Krein helps oversee StartUp Health investments in hundreds of companies, including some hoping to break through with the federal agencies battling the global coronavirus pandemic.

Since 2011, when Krein founded the firm with his brother Steven Krein and veteran tech entrepreneur Unity Stoakes, Joe Biden has been an active supporter of the venture — headlining corporate conferences and inviting the company’s executives to the Oval Office to meet then-President Barack Obama.

When the COVID-19 crisis emerged during Biden’s bid for the White House, Krein stepped up in the spring to advise his father-in-law’s campaign in an unofficial role on potential pandemic response plans — an arrangement that garnered scrutiny at the time, given StartUp Health’s push to invest in firms that were looking to tailor products to help the pandemic response.

Now, with Biden in office, Krein’s involvement with StartUp Health has prompted more tough questions, ethicists and tech industry experts told ABC News. Among them: Should Krein advise companies backed by StartUp Health in their efforts to win lucrative government contracts? Should he weigh in with his father-in-law on policy decisions that may benefit those companies? And will he obtain sensitive government information that may help inform investment decisions?

“Dr. Krein presents an ethical dilemma because he’s being placed in a position where people want him to deliver access and information that will provide them with a competitive advantage,” said Scott Amey, general counsel at the nonpartisan Project on Government Oversight, which investigates possible conflicts of interest and allegations of waste or fraud in federal government.

“At the same time, Biden has to ensure that family and friends’ private matters don’t merge with official government actions,” Amey said. “This situation will take a good amount of transparency and oversight to ensure that lines are not crossed and that ethics standards are upheld.”

Neither StartUp Health nor Krein responded to multiple inquiries from ABC News.

Michael Gwin, a White House spokesperson, insisted that “Biden has set and maintained the highest ethical standards for himself, his administration, and those around him.”

“Any implication to the contrary is flatly untrue and unsupported by the facts,” Gwin said.

Since taking office, Biden has reaffirmed his campaign pledge to maintain a wall between his family’s business enterprises and his work leading the federal government.

“We’re going to run this like the Obama-Biden administration,” he told People Magazine last week. “No one in our family and extended family is going to be involved in any government undertaking or foreign policy.”

Called to the Oval Office

StartUp Health has invested nearly $2 billion over the past decade, which it has poured into more than 350 startups focused on addressing a long list of challenges in health care, ranging from nutrition and fitness to opioid addiction.

“Health care is a very tough place to run a startup … so as a startup you need all of the help and support you can get,” said Prasad. “That’s where StartUp Health plays a critical role. It’s a support system to lean on.”

StartUp Health is one of a number of specialists in this arena, but it has not been shy about touting its unique connection to the corridors of power in Washington. The firm has frequently linked itself to the Biden family in promotional materials, highlighting Krein’s travels with the former vice president to promote cancer research and touting Biden’s participation as a speaker at its annual festival, which he did twice as an independent citizen after leaving the vice presidency.

Shortly after the company was started, its founders were invited to an Oval Office meeting with then-President Barack Obama to preview their plans. Howard Krein recounted the details of that visit in a 2015 interview.

“I happened to be talking to my father-in-law that day and I mentioned Steve and Unity were down there [in D.C.],” Krein said. “[Biden] knew about StartUp Health and was a big fan of it. He asked for Steve’s number and said, ‘I have to get them up here to talk with Barack.’ The Secret Service came and got Steve and Unity and brought them to the Oval Office.”

In the intervening years, as StartUp Health has expanded its footprint in the health care tech sphere, its executives have invoked the White House meeting and their special ties to Biden as evidence of the venture’s prominence. References to Biden are scattered across StartUp Health’s website and publications. The company’s blog even republished an excerpt from Biden’s memoir.

Biden’s public praise of both the company and Krein only escalated when he left the vice presidency. “I love him like he’s my own,” Biden said of Krein in 2018. Twice Biden appeared as a featured speaker at events hosted by StartUp Health that were intended to entice venture capitalists to invest in the company, touting his son-in-law’s position as an executive at the firm.

“Changing the culture to vastly expand cooperation; that’s what attracts me to Startup Health — not just my incredible admiration for my son-in-law,” Biden said at the 2018 StartUp Health Festival in San Francisco. “[Krein] is one of the finest men I’ve ever known in my life, and when a father-in-law says that you know it means something.”

Prior to founding StartUp Health, Krein volunteered with the World Pediatric Project for 15 years, participating in international humanitarian missions to provide reconstructive surgeries for children. He did so while continuing to practice medicine in Philadelphia.

In the spring of 2020, Krein appeared on StartUp Health NOW, the firm’s podcast, to discuss how new technologies may contribute to the pandemic response. During the interview, he promoted a wearable pulse-oximeter developed by an Israeli tech startup called Oxitone as a way of detecting the virus in patients before the onset of symptoms.

“It’s really going to revolutionize the way we care for patients,” Krein said of Oxitone, one of StartUp Health’s earliest investments.

In an interview with ABC News, Dr. Leon Eisen, the founder and CEO of Oxitone, said StartUp Health has been an invaluable partner in the growth of his company, and counts Krein as “a very good friend.” Eisen agreed it is difficult to ignore the benefit of Krein’s connections, even as he made it a point to say that StartUp Health has always conducted itself with integrity.

Weeks after his March podcast appearance — during which Krein also announced that the pandemic response would become the company’s twelfth “moonshot” initiative — Krein’s name surfaced as one of a small group of health experts helping then-candidate Biden shape his own pandemic response platform.

A campaign spokesperson told ABC News in October that Krein’s contribution to the campaign was limited to sharing his experience treating COVID-19 patients during the daily conference calls convened by top campaign officials.

In the hypercompetitive world of venture capital, where information and connections are valuable currency, Krein’s dual roles as a tech entrepreneur and as son-in-law to the president present several novel challenges, experts said.

One of those challenges is determining whether Krein will have access to nonpublic information about the Biden administration’s pandemic response plan that may help guide StartUp Health’s investment choices, according to Dr. Johannes Lenhard, a University of Cambridge ethics researcher and author of a forthcoming book on the ethics of venture capital.

Given the inherent risk associated with venture capital in determining which startups may someday become profitable, any informational edge would be of tremendous value to investors, Lenhard said.

“This whole world is based on insider knowledge, and the information is not equally distributed,” said Lenhard. “A lot of stuff that would be totally outrageous in banking, like this idea of insider trading, is totally commonplace in venture capital. Every deal, in a sense, is based on specific information that an investor might have gotten from their network.”

A White House official said that processes involving both the White House Counsel’s office and Biden family representatives are in place to address conflict-of-interest questions, but the official declined to describe those processes in detail.

Ann Skeet, an expert in leadership ethics at Santa Clara University, said the ethical considerations surrounding Krein demonstrate the inherent tension now facing the Biden administration as it seeks to regain much of the public’s trust in government after what Skeet called four years of overt nepotism during the Trump administration.

“Everyone who holds elected office has an obligation to the constituents they serve, and part of that includes avoiding even the appearance of any kind of impropriety,” Skeet said. “It’s something that people in those roles deal with on a regular basis.”

During Trump’s four years in office, his eponymous company continued to pursue real estate deals and his hotels and golf clubs catered to a string of foreign and lobbying clients in what Skeet called a flouting of the barriers that traditionally prevent elected officials from profiting from private business while in office. Skeet said Biden owes it to Americans to hold himself to a new, higher standard of ethical conduct.

2 thoughts on “As Biden’s son-in-law invests in CV19 response, questions of family and ethics could resurface”