The coup carried out in the United States by the Rockefeller family and their Council on Foreign Relations slaves is falling apart as the world shuns this heinous crime family.  Following the exit of Donald Trump, there is a growing consensus among the power elite that Joe Biden’s fake presidency is becoming a disaster movie.  That is why a third alternative is being worked on at the highest levels of world power, multiple secret society sources say.

As things stand, the Dragon family, the P3 Freemasons, the Knights of Malta, the British Commonwealth, the Lotus Freemasons, the Russians, and other groups have agreed that a meritocratically staffed future planning organization, with trillions of dollars in funding, is needed for the planet.  The Thule society has also been contacted to see if they would be willing to come out of hiding and make their anti-gravity and other technology available to humanity as a whole.

As MI6 puts it these “backchannel discussions are the most important diplomatic discussion in the world at the moment if not in history if we achieve what we envisage.”  Since – for security reasons – these discussions are taking place via analog means, it will take at least three weeks for any publicly visible results, the sources also say.

In the meantime, the fake Biden presidency psy-ops continues to degenerate.  We can now confirm that no U.S. military commanders met so-called U.S. Defense Secretary Llyod Austin when he visited Japan in mid-March.  We can also confirm that the South Korean government shunned both Austin and fake Secretary of State Anthony Blinken when they visited that country after Japan.

The so-called president Biden also had what was billed as his first press conference last week.  However, it did not take place at the White House and no foreign reporters were there.  Nor were the vast majority of the White House Reporters from the Trump administration there.  In other words, it was a completely staged incident using propaganda slave reporters throwing softball questions to a mentally challenged Biden look-alike who could barely read his teleprompter.

While this pathetic charade denigrates the U.S. image even further, economic warfare is raging with attacks both by and against the Rockefeller mafia and their stooges.  The most obvious sign of this, of course, is the Evergreen company ship that blocked the Suez Canal after navigating an “up yours” sign. 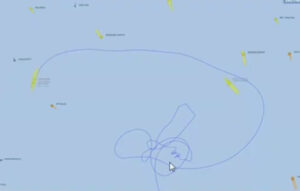 Evergreen is the secret service code for Hillary Rockefeller Clinton, meaning this blockage was a clear message to the Rockefellers.

Corporate media avoided using the company name “Evergreen” and instead referred to the ship’s name “Ever Given”  to divert attention. 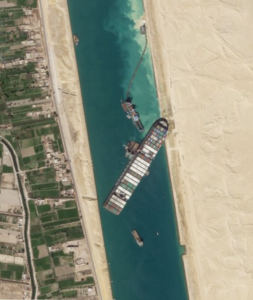 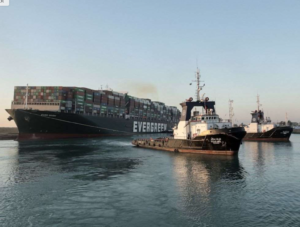 As has been reported widely elsewhere, a major Chinese highway was also blocked by a truck with the Evergreen logo on it. 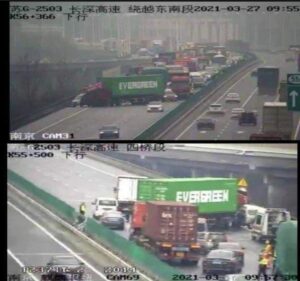 The message is clear, the Chinese communist party deal with the Rockefellers to fund their fake Biden presidency must be ended or Chinese trade routes will be blockaded.

The Chinese took the blockage of the Suez Canal to be an act of war and responded by shooting down two U.S. military satellites, Asian secret society sources say.  The short video clips below show their destruction, the sources say. https://video.wixstatic.com/video/bcb736_616b35e912434434ae6e1350cfa7d746/720p/mp4/file.mp4

The blockage of the Suez Canal and the shooting down of satellites were only the most visible recent signs of the ongoing hybrid world war For example, the Automobile industry, a remaining stronghold of Rockefeller industrial strength, is being slowly strangled by a shortage of semiconductors.

There is also a new spate of assassinations and executions going on.  Tom Heneghan, who published the picture of Nazi CIA agent Mike Cottrell, briefly reported last week that Cottrell had been killed.  That report has since been totally scrubbed from the internet.

He also reported that Cottrell lawyer Al Hodges had been cooperating with agency White Hats by “turning over internal communications between Cottrell, Dana Wilcox of the Delmara Timber Trust, then U.S. Treasury Secretary Henry ‘Hank’ Paulson and child rapist Nazi German junior George W.  BushFRAUDScherff.”  This has also now been scrubbed from the internet.

This past weekend we also learned of the death of Gnostic Illuminati Grand Master Sasha Zarik, aka Alexander Romanov.  Zarik was killed by a train at Hanakoganei station in Tokyo last August, according to his wife.  We only learned of this last week because the information had been deliberately withheld from us by the group of gangsters hiding on the second floor of the Koganei police station in Tokyo.

Zarik was an Australian Secret Intelligence Service agent who infiltrated East Asian drug smuggling operations of the drug dealing faction of the CIA.  He blew his cover in June of 2010 when he went to the Australian embassy in Tokyo to warn that a nuclear device had been smuggled into Japan for use in a nuclear terror attack.  The following day Australian Prime Minister Kevin Rudd was forced to resign by the “Federal Reserve Board,” according to Zariks’ ASIS colleagues after Rudd passed this warning on to U.S. intelligence.

Zarik had also been ordered to visit this writer and announce that he had 70 kilograms of contraband and that I had to introduce him to the Japanese Yakuza underworld or else I would be killed.  He said if I made the introduction I would get an income of about US$10,000 per month.  Instead, I introduced Zarik to Japanese military intelligence agent Takamasu Kawase, who warned it was a trap.  The contraband turns out to have been laced with mind-destroying chemicals and Zarik underwent a complete mental degeneration after consuming it over a period of several months.

Zarik had also been asked by the Koganei police thugs to perjure himself by testifying that I was the mastermind behind the deal.  He refused, after which his former secret agency colleagues began to shun him.  It was also around this time that British Prime Minister Tony Blair began bragging that I would soon be put in jail on drug charges.

Because he blew the whistle on the planned nuclear terrorism and refused to commit perjury; Zarik’s passports and all identifying documents in his possession were taken from him, leaving him stateless and bankrupt.

You can be sure the entire Koganei police department will be branded as war criminals and hunted down and killed unless they hand over the people who murdered Zarik, including, our sources say, Hirofumi Nakasone, the son of Yasuhiro Nakasone (who died while undergoing interrogation in Guantanamo).

Zarik joins Neil Keenan, Jane Burgermeister, Christopher Story, and many others in the ranks of those martyred for taking action against these genocidal thugs.  However, a lot more of the bad guys, including most of those mentioned above, have either been killed, jailed, or removed from office.  Any still alive will not be for much longer.  Genocide is not a crime you can get away with lightly.

Speaking about genocide; a Mossad source informs us the so-called Vice President Kamala Harris’s husband, Doug Emhof is a member of the “kill 90% of humanity and enslave the rest” Chabad death cult.

This death cult, having failed to kill us with bio-weapons is now trying to kill us with vaccines as countless whistleblowers are now saying.  The following link and short excerpt from former Pfizer Vice President and Chief Science Officer Dr. Mike Yeadon has a clear message:

…if someone wished to harm or kill a significant proportion of the world’s population over the next few years, the systems being put in place right now will enable it.  It’s my considered view that it is entirely possible that this will be used for massive-scale depopulation.”

The forensic trail to the head of this octopus or the Octogon group remains Switzerland.  Remember, when I went to visit the P2 (now P3) Freemasons in Italy, they told me they were going to fire pope maledict and prime minister Berlusconi of Italy and they did.  Now, one member of this group, Leo Zagami, says pope Francis (or more likely his body double) will “soon resign.” https://leozagami.com/

Zagami and his colleagues also said they took their orders from “aliens in Switzerland.”

The White Dragon Society has offered to send a representative to meet these “aliens” in Switzerland to negotiate a change in how this planet is run.  Detailed proposals have been sent via various intelligence agencies to the BIS.  As mentioned above, the Thule Society, which operates from underground bases in Switzerland and Greenland, according to internal sources, has also been contacted.

The Dragon family has also offered the WDS the use of any of the countless IOUs (high denomination bonds etc.) they were given over the years by these Swiss “aliens,” in exchange for their gold.  These IOUs, in dominations of countless trillions of dollars, would be more than enough to finance massive projects to turn this planet into a paradise for all living creatures.

The creator of the Quantum Financial System, who is about to get his rights over the system taken back from the Rothschilds, (who stole it from him) has also offered support and has contacted the BIS.

The Swiss must hand over these “aliens” to a Nuremberg-style tribunal.  Remember, these people have been – and still are – actively trying to murder most of humanity.