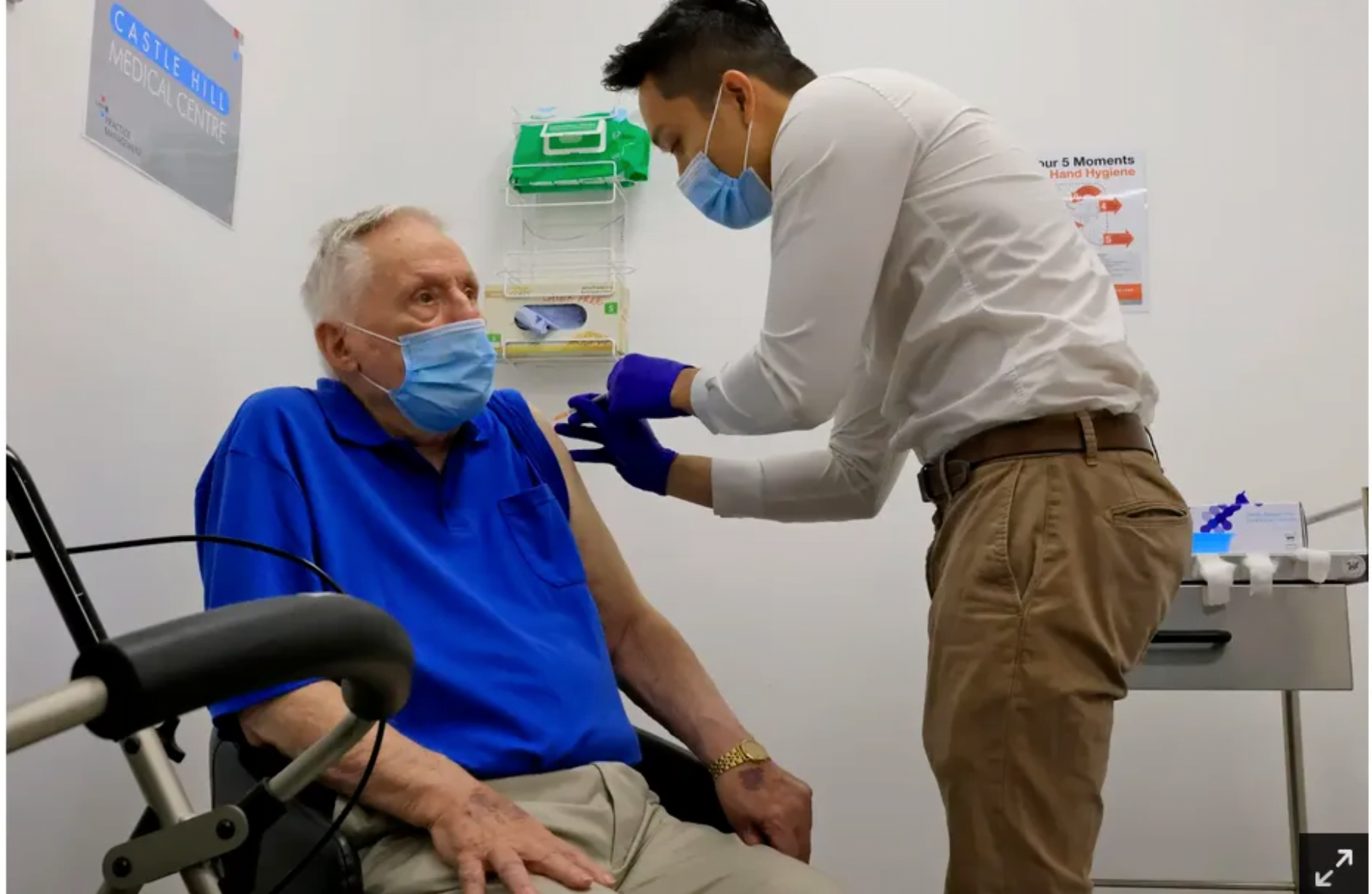 From everydayconcerned.net as suggested by one of our subscribers:

This is extraordinary news which raises a number of questions, whichever way you look at it. A Public Health Authorization has surfaced online, naming the COVID-19 vaccine a poison, as well as referring to it as gene technology using GMOS, among other revelations.

Dr. Andrew Robertson, Chief Health Officer, Western Australia, has signed this authorization dated 18 February 2021 to “supply or administer a poison [SARS-COV-2 (COVID-19) Vaccine-Australian Defence Force]” for purposes of emergency management during a public health emergency to authorize specific “persons”, further elaborated in an annexure to be nurses and midwives, contracted or subcontracted to Aspen Medical or “an entity contracted by Aspen Medical Pty Ltd” to receive, possess, supply, and administer the VACCINE–spelled in all caps–to staff and residents at residential aged care and disability facilities.

This Public Health Authorization, shared with this writer on email this morning–first posted at FromRome.info: Western Australian Government Classifies COVID Vaccine as a Poison –and currently being shared online, can be found here and has been uploaded in PDF here. (Click to download the PDF)

The authorization appears to be specifically aimed at authorizing Aspen Medical’s contractors to administer a poison, parenthetically named the SARS-COV-2 (COVID-19) VACCINE to care home residents and staff. This is curious in itself and bears further investigation. Is it possible that the Western Australian Government is putting the truth in plain sight here?

The mRNA vaccines have been causing death, fatal blood clots, and instant disability in thousands of cases worldwide, recorded at the CDC VAERS database, at the Yellow Card program in UK, at EudraVigilance in Europe, and various other databases elsewhere no doubt. Immunologists like Dr. Sucharit Bhakdi, Dr. Michael Yeadon and Professor Dolores Cahill have been openly calling for a halt to the vaccines, pointing to the rising numbers of deaths and describing how they may be working, via spike protein or cytokine storms to cause blood coagulation, brain shutdown, neuro-inflammation, and organ damage; as Dr. Bhakdi explains, these are gene-based vaccines, never tested before on humans, and all being vaccinated now are actually being used as human guinea pigs without Informed Consent.

Aspen Medical is a private healthcare provider which seems to be running the Australian Government, and particularly, their Health and Public Health activities. From their website:

“Founded in 2003 by Glenn Keys AO, Aspen Medical is an Australian-owned, multi award-winning, global provider of guaranteed and innovative healthcare solutions across a diverse range of sectors and clients including Defence, Mining & Resources, Oil & Gas, Government and Humanitarian.”

The Authorization makes reference to the Public Health Act of 2016, the Australian COVID-19 Vaccination Policy, and the COVID-19 Vaccine National Rollout Strategy.

In the Medicines and Poisons Act 2014, Part I which describes the terminology refers to Schedule 4 as Schedule 4 Poison, and thence all classifications are listed under Section 4 as Poisons:

It is not quite clear therefore whether the Medicine and Poisons Act 2014 is offering a classification of substances used as medicine along the medicine-to-poison scale, with Schedule 2 and 3 being Pharmacy medicines, and oddly, Schedule 1 being left blank–perhaps over-the-counter medication, or just stressing they’re all poisons, as that section header (4) declaims, with slight variations in potency based on numbering in the schedule table.

Lingering question: why is the COVID vaccine being named a poison and a Schedule 4 prescription-only medicine at the same time?

That all vaccines are poisons, and contain antigens which have poisonous effects has long been discussed by scientists questioning the use of vaccines, particularly on evidence of the diverse adverse events recorded, including autism, paralysis, and SIDS.

Further clarity accrues from the named Sections 197 and 198 of the Public Health Act of 2016 which states it overrides the 2014 edition of the Medicines and Poisons Act, and more clearly uses the term “Poison.”

But this is rather startling disclosure that the COVID vaccine is known to be poisonous, and is classified as a Poison, by the very health officer authorizing its usage on the elderly, using “emergency management” and “public health emergency” as justification.

Looking up Dr. Andrew Robertson’s background also reveals he served in the Royal Australian Navy including on 3 tours to Iraq as United Nations Biological Weapons Chief Inspector–indicating an awareness of biological weapons, which he now seems to be sanctioning, in his role as Public Health Officer.

(Dr. Lee Merritt has called the vaccine a bioweapon. Dr. Michael Yeadon has stressed the mRNA vaccines will unleash a biological engine with unknown longterm effects in the body. Dr. Bhakdi and Dr. Mikovits have stressed neuro-damage as a consequence of the mRNA vaccines. Dr. Andy Wakefield has likened the endless creation of spike proteins in the body by the mRNA vaccines to the unleashing of a T Rex.)

This authorization also discloses that the SARS-COV-2 (COVID-19) VACCINE–“all the adenovirus vaccines and some of the mRNA vaccines” contain GMOs, or genetically modified organisms.

Perusing Annexure B of this Public Authorization PDF titled “Public Health Act 2016 (WA) – Instrument of Authorisation – Authorisation to Supply or Administer a Poison SARS-COV-2 (COVID-19) VACCINE – Australian Defence Force 2021” one quickly finds, on Page 12 that the Office of the Gene Technology Regulator is required “to approve and license any COVID-19 vaccines being administered in Australia that use GMOs. These include all the adenovirus vaccines and some of the mRNA vaccines.”

The Gene Technology Act of 2001 has interesting definitions of the term “deal with GMOs” to include manufacture and propagation of GMOS:

The Gene Technology Regulator Statement of Intent 2020-2023 is a rather interesting document requiring its own separate analysis, which, among other things defines gene technology and reveals as its stakeholders the very research institutions, Universities, and “bio-hackers” pushing the Gene Technology agenda–which, arguably, is indeed the gene-based vaccines and gene-therapy agenda, with its parallel intent to re-code, replace, and acquire control over the human genome.

This is exactly how, worldwide, the entire spectrum of dubious, questionable, and often highly unethical technology is being rolled out, with documents, statements of intent, future vision and strategy documents which project complacency, wide acceptance, and public consent–when no public disclosure, public questioning and debate, and public consent has actually occurred, a dangerous strategy which results in the kind of situation we are seeing now: experimental gene-based vaccines causing thousands of deaths and adverse events worldwide.

As to the mystery of the Australian Defence Forces being named in the VACCINE name– “[SARS-COV-2 (COVID-19) Vaccine-Australian Defence Force],” the ADF was called to help administer the vaccines in care homes in early March, supposedly after private healthcare providers fell behind schedule and proved incompetent, as per the Sydney Morning Herald of March 2, 2021–ADF Called in to Assist Aged Care Vaccine Rollout:

“The Australian Defence Force will support the private logistics and healthcare companies already providing vaccines at aged care facilities around the country, with the addition of ADF personnel in logistics teams as well as more security and clerical staff.

But the use of the military to administer the vaccines–now more generally, not just to inject the captive elderly in care homes–may have been planned from the outset, and implemented to present to the populace the illusion of total spectrum control, the kind of all-around coverage and control these government groups like to project, while also setting loose the fear of martial law and mandatory vaccinations which indeed has frequently surfaced as possibility and been discussed openly by many media outlets.

The connections between the Pharma industry, the military, and governments continue to be a subject for further exploration. Pfizer and Moderna, it must be remembered, developed the mRNA vaccines on contract from DARPA, a weapons research agency which develops weapons of every kind.

This acknowledgment of the COVID-19 vaccine–possibly intentionally by only a remote outpost of the Global Empire–as poison and gene technology requiring OGTR oversight and approval is significant.