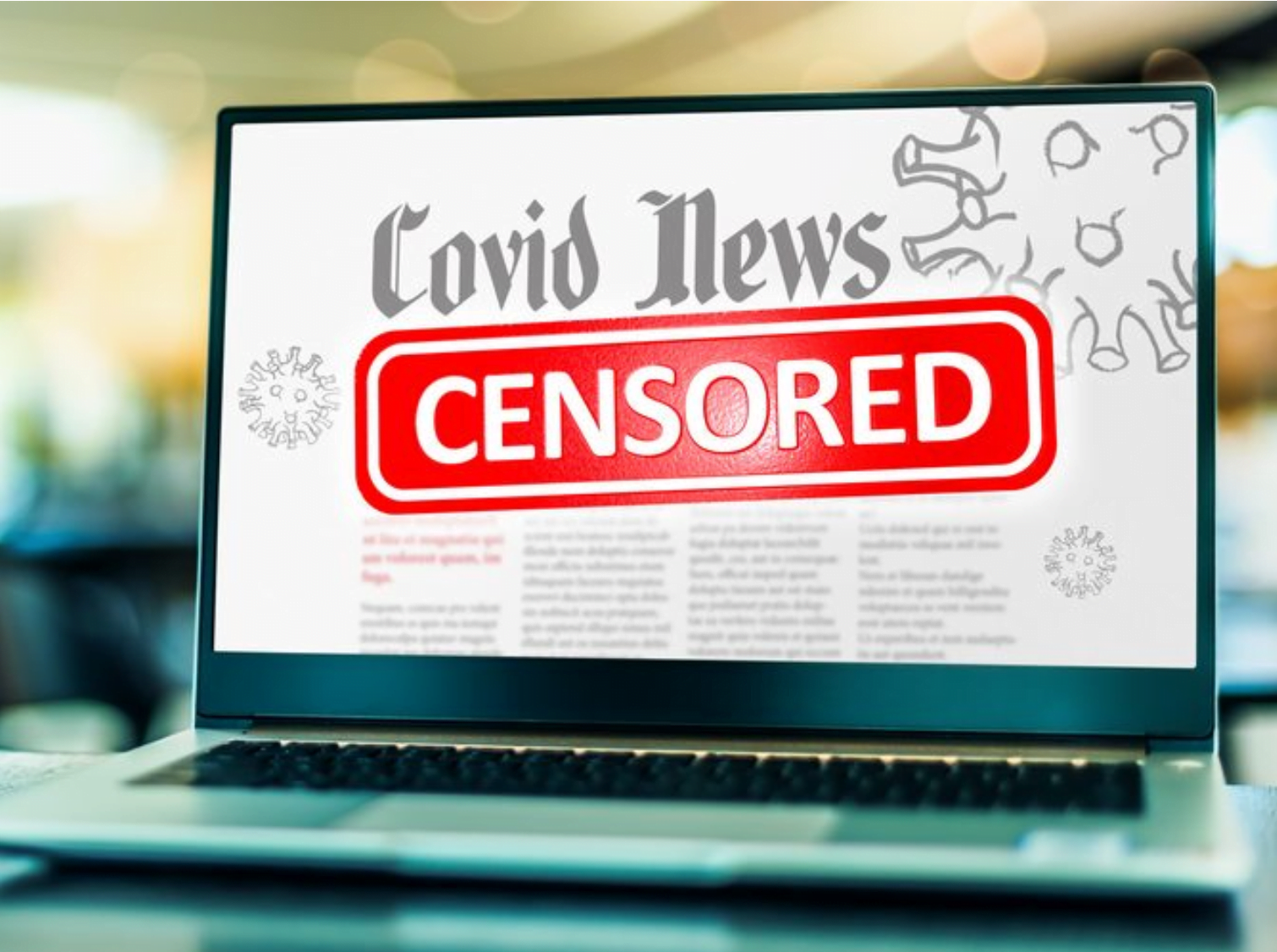 Almost 30 journalists have banded together to object to “censorship” and “fearmongering” about Covid-19 that they say has been put out by the media and tech giants since the pandemic began.

The group, who have called themselves Holding the Line: Journalists Against Covid Censorship, have argued that attempts to share concerns counter to the “one official narrative” or “one ‘scientific truth’” have led to reporters being criticised by their managers, freelances being blacklisted, and the public receiving a “distorted view of the truth”.

However Fiona Fox, chief executive of the Science Media Centre which she set up to help improve coverage of science stories in the UK, disagreed with many of the group’s claims. “On the whole the media coverage of Covid-19 has been exemplary and something about which the science and health correspondents should be celebrated for some time to come,” she said.

The 26 Holding the Line members work across UK newspaper groups, broadcasters and PR, as staffers and freelances.

Most asked to remain anonymous to protect their employment, but some were happy to be named, including broadcast producer and former BBC journalist Tony Gosling, Sonia Elijah, an investigative journalist who writes for The Conservative Woman, and PR and tech journalist Laura Berrill.

They said they want to encourage best practice, create a “prejudice-free” environment for journalists who have concerns, raise awareness of lesser-reported issues, and raise concerns about “censorship” from tech giants like Youtube which take down coronavirus “misinformation”.

They said the media in general was doing “incredible work”.

However they did list some perceived failures, including a lack of context for statistics, due coverage for alternative treatments, scrutiny of PCR testing, attention to adverse vaccine reactions, or balanced examinations of the costs of lockdown.

And they accused the UK media of frequently publishing “fear-inducing and sometimes inaccurate” coverage helping to foster a hostile environment for those who choose not to have a Covid-19 vaccine.

Elijah, who came up with the group’s name and found it “therapeutic” to talk to others with the same concerns, told Press Gazette: “It’s been unprecedented the way Covid-19 has been reported in the UK but not just in the UK, worldwide.

“There’s only been one official narrative played out in the mainstream media and that has not changed over time.

“There’s only been one ‘scientific truth’ allowed to be discussed: the one endorsed by worldwide governmental regulatory bodies, even that has been very selective. This has given the public a distorted view of the truth which has been highly damaging.”

Elijah said her biggest concern was about “censorship” of information online that goes against this narrative and referred to the Trusted News Initiative, through which the BBC, other publishers and tech giants flag up the most dangerous disinformation to each other.

“For a long time, we’ve been in this dark era of censorship that’s been embodied by the Trusted News Initiative which cuts across big tech and all mainstream media,” she said.

“It’s been packaged around this war on disinformation or misinformation- where anything that’s gone against the official narrative has not just been ‘fact checked’ but has been suppressed or removed.”

Ex-BBC radio journalist Gosling told Press Gazette he had interviewed two doctors who shared counter-narratives – Dr Tess Lawrie of the Evidence-based Medicine Consultancy in Bath who called for early treatment to take place post-Covid diagnosis, and Florida-based immunologist Dr Stanley Laham who called for the use of ivermectin and warned against the use of the approved but “experimental” vaccines – but that both were removed from Youtube on grounds of misinformation.

Gosling said he wanted to speak out against fear-inducing and sometimes inaccurate coverage.

He pointed as one example to a BBC Newsround segment last month in which a contributor claimed the Pfizer vaccine was “100% safe” for 12 to 15-year-olds. Gosling submitted a complaint about the “shocking” and “disgusting” claim and the BBC has since removed the claim from the online article and video and published a correction.

Gosling said: “Our main concern is that there’s a very powerful lobby behind many of these Covid measures, including treatment, lack of treatment and vaccines, obviously, but there isn’t much of a lobby in the other direction. And I think most of us feel that our employers of various sorts have not been representing both sides.”

Gosling added: “My own aim is to provide balance, that’s it basically. And also to point out to the public that the journalists don’t always get to choose what gets published.

“It’s the owners and the editors that have the final say, so we are all of the same mind that we would like to see more journalists being editors and having their own newspapers, having their own TV/radio stations but that’s very, very rare. So there’s always an editor somewhere just saying no, I don’t want this, and particularly through this pandemic that’s the way it’s been, people have found it difficult to get stories in, and it’s been frustrating.”

The group secretary, who has worked in the newspaper industry since the late 90s and asked to remain anonymous, said: “We are definitely not about slamming the legacy media as so much good work has been done and is being done, but we are wanting to promote best practice on reporting Covid and to raise awareness about Covid issues the tech giants are censoring.

“It is a difficult time for journalists to go against the grain and we have heard of examples of freelancers being blacklisted and of those, with legacy media contracts, being criticised by their managers for wanting to cover stories on vaccine harm and the fallibility of the PCR test.

“But we are not holding a stance one way or the other on any issue, we just want newspapers and the broadcast media to be able to host balanced debate and for that debate to take place without fear of reprisals in newsrooms.”

Coverage has been ‘exemplary’

Fiona Fox of the Science Media Centre told Press Gazette she thought it was right to reflect on how the media had done during the pandemic, but felt many of the claims made by the group were too sweeping or unsupported by evidence.

She said she did not recognise the allegation of “fear-inducing and sometimes inaccurate” coverage: “You can literally say that about the media at any time in the last 20 years – you can find examples of scare stories and you could find inaccuracies, but honestly, on the whole… media coverage of Covid-19 has been balanced, measured, accurate to the point that I think we should be shouting that from the rafters.

“You’ve got to remember that this isn’t one science story in amongst all the other political stories, transport stories, education stories. It’s the only story in town for 18 months, of course you can find inaccurate coverage.”

Fox also responded to the group’s claim the UK media had “undermined” initiatives like the Great Barrington Declaration, a statement written by three scientists endorsing an anti-lockdown, herd immunity approach which has been called “dangerous” by other scientists.

She pointed out that the authors appeared on BBC Radio 4’s Today programme, that it received widespread media coverage, and that many scientists did not believe it should have been covered at all.

“What the media did, however, was made sure that the public realised that the scientists who signed this were a minority view within science,” Fox said, contrasting this with the media’s “historic failure” that led the public to believe a much greater proportion of the scientific community believed the MMR vaccine caused autism than really did.

“One of the things the media has learned is that if you’re going to cover controversies and disagreements, it’s really important to signal to your audience and your readers where scientists are in the minority.”

Fox also said she had not seen any overt censorship of data but added: “Of course some newspapers have highlighted the stats that support their editorial line on issues like lifting restrictions but ”twas ever thus’.”

She disagreed there had been a lack of proper context for statistics, pointing to the regular briefings held by the Science Media Centre in which statisticians explained the latest data to around 60 journalists.

And she said journalists had “seriously weighed up” how to report the tiny risk of dying after having a blood clot because of the AstraZeneca jab and noted they had not blindly followed the Government’s plea for “positive messaging” on the vaccines.

Holding the Line are inviting journalists and ex-journalists to join them with anonymity assured – contact  journalistsagainstcovidcensorship@protonmail.co