Moses, Einstein, and where we are now.

I heard Deepak Chopra say that humanity is at “a minute before extinction.” He also said that a spiritual awakening is our only hope for turning things around in time.
In the space of spiritual awakening, that proverbial minute is more than long enough for us to change planetary direction. Why? Because a mind that is awakened transcends the laws of time and space.

In order to understand why that is, let’s go backwards in order to go forwards; back so far back that we’re with Moses and the Israelites when they arrived at the Red Sea. That would be thousands of years ago of course, if it even happened at all. In the words of Jack Kerouac when asked whether the stories in On the Road had actually occurred, he responded, “It’s true even if it didn’t happen.”
Just as the Israelites reached the sea, Egypt’s Pharaoh had a change of heart; he regretted his decision to let the Israelites go, sending his army to force his former slaves to return. For the Israelites, of course, that meant they were between a rock and a hard place. If they moved forward, they would drown in the sea; if they went backwards, they would be killed or taken back into slavery by the Egyptian soldiers.
And what happened then…?

What happened then was a miracle. God told Moses to “lift his rod” (raise his thoughts to the highest sense of faith in what’s possible) and run his hands across the water.
Then, the Red Sea parted. 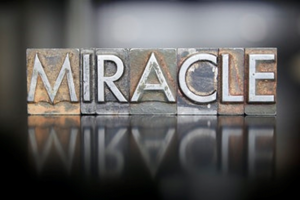 A story that has lasted that long, and been repeated as many times as that one has been repeated, bears deeper understanding. When Moses moved forward in absolute faith, his consciousness gave him power over time and space. It says in A Course in Miracles that we are heir to the laws that prevail within the world we identify with. If we only identify with the mortal world, then we are completely at the effect of the mortal world. Yet when we shift our sense of self-perception – moving from body-identification to spirit-identification – we are lifted beyond limits that would otherwise obstruct us. Our minds become open to clarity, intuition and abilities we wouldn’t otherwise experience. We align with synchronistic opportunities that wouldn’t otherwise occur.

Today, the mortal world is more and more locked up by forces that could spell apocalyptic scenarios for the human race. If looked at only from a material perspective, from climate change to endless war, humanity is headed for a downward spiral unlike anything we have experienced before.

But if we identify with more than our mortal existence, recognizing we are more than mere material beings, then we’re lifted beyond circumstances that normally prevail within our experience. In fact, we are not who we think we are. We are spirits of unlimited power, simply trained by the thinking of the world to believe that we are powerless. For our power lies as much in the heart as in the brain. In the presence of love, miracles occur naturally. It’s not greater technology but rather higher consciousness that gives us the power to work miracles. The parting of the Red Sea is not just a story about what happened then; it’s a story about what’s possible now.

Years ago, early in my career, I had told my therapist I was nervous about a book deadline. At the end of our session she said something I never forgot. She didn’t say, “I hope you get the book finished on time!” Rather she said, “I hope time slows down for you this week.”
It surprised me at the time, and certainly made me think. Time is actually malleable. It’s like when people say they “don’t have time” to meditate. The ridiculous thing about that is that meditation slows down time. You literally have more time when you meditate. Anyone who meditates regularly can tell you that the ability to relax into a deeper space of consciousness allows them to be far more productive within the time they have available. As Albert Einstein so famously said, ‘Time and space are illusions of consciousness, albeit persistent ones.”

Years ago, I attended a meeting where Werner Erhard, the founder of EST, was giving a live lecture delivered via satellite to an audience in Los Angeles. In his talk, he spoke about a period of his life when he trained to become a race car driver. He was at a conference with some of the most masterful drivers in the world, and found himself sitting with some of them at the end of an evening. He was excited to be in their presence, eager to hear how they described the experience of driving at incredibly fast speeds. But what he heard, he said, amazed him. For what became obvious in listening to them was that, for them, once they were driving at incredibly fast speeds it was as if they were relaxing in their living rooms.

Erhard was basically talking about spiritual mastery in an incredibly fast moving world. The antidote to a chaotic world is to find a point of stillness within ourselves, to cultivate a single-mindedness from whence comes the clarity and wisdom to bypass the chaos of the world. We forge a way through it by using a power that lies beyond it. We cannot rationally formulate or strategize our way out of the problems that humanity faces now. If our only tools are traditionally political calculations then we are in very, very deep trouble. But those are not the only tools at our command.

We are not just contending with forces of traditional political opposition; we are contending with forces that are soulless. And the only way to dissolve them is with soul. If we put the power of the mind in service to a higher kind of knowing – a sense of reverence and devotion to all sentient beings, with a commitment to bring public policies as well as personal behavior into alignment with love – then miracles will occur and we will cross the Red Sea.

This is why so many people today see serious spiritual practice not as a way to avoid the problems of the world, or even as a way simply to endure them, but as a way to transform them. For also in the words of Albert Einstein, “We cannot solve our problems with the same thinking we used when we created them.” Spirituality is the path of the heart, restoring the brain-heart connection without which human beings become sociopathic. The human mind divorced from love, from reverence, from devotion, is a dangerous thing. The mind reconnected to love is a conduit for our repair.

Like a GPS that will recalibrate when the route when one has taken a wrong turn, so the universe knows how to right itself when we have deviated from love. In the space of an awakened consciousness – the mind single-mindedly devoted to faith and forgiveness and love and mercy – new synapses in the brain and new possibilities in the world occur naturally. Circumstances arrange themselves to provide optimal opportunity for regeneration. Time. is. no. big. deal.