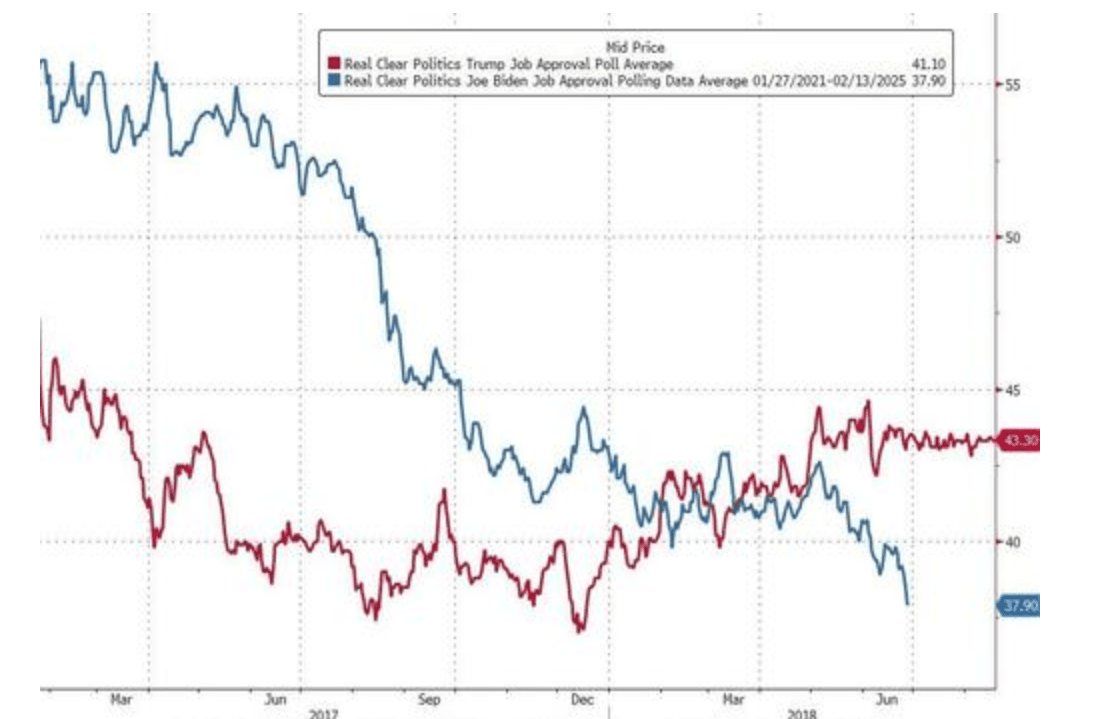 While the Biden administration is hoping and praying that someone – anyone – will watch the comical “Jan 6” kangaroo hearsay court taking place in Congress and meant to somehow block Trump from running for president in 2024 while also making hundreds of millions of Americans forget that the current administration could very well be the worst in US history, it is quietly preparing for the worst.

As none other than pro-Biden propaganda spinmaster CNN reports, when it comes to what really matters (at least according to Gallup), namely the economy, and specifically galloping gasoline prices, the White House is in a historic shambles.

For an administration that ended last year forecasting a leveling off of 40-year high inflation and eager to tout a historically rapid recovery from the pandemic-driven economic crisis, there is a level of frustration that comes with an acutely perilous moment. Asked by CNN about progress on a seemingly intractable challenge, another senior White House official responded flatly: “Which one?”

The suspects behind the historic implosion are well known: “soaring prices, teetering poll numbers and congressional majorities that appear to be on the brink have created no shortage of reasons for unease. Gas prices are hovering at or around $5 per gallon, plastered on signs and billboards across the country as a symbolic daily reminder of the reality — one in which White House officials are extremely aware — that the country’s view of the economy is growing darker and taking Biden’s political future with it.”

“You don’t have to be a very sophisticated person to know how lines of presidential approval and gas prices go historically in the United States,” a senior White House official told CNN.

A CNN Poll of Polls average of ratings for Biden’s handling of the presidency finds that 39% of Americans approve of the job he’s doing. His numbers on the economy, gas prices and inflation specifically are even worse in recent polls. What CNN won’t tell you is that Biden is now polling well below Trump at this time in his tenure. 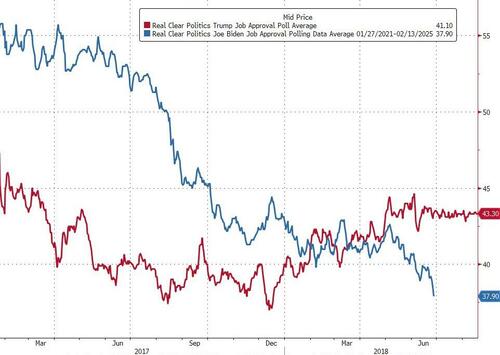 The CNN article then goes into a lengthy analysis of what is behind the current gasoline crisis (those with lots of time to kill can read it here) and also tries to explains, without actually saying it, that the only thing that can fix the problem is more supply, but – as we first explained – this can’t and won’t happen because green fanatics and socialist environmentalists will never agree to boosting output.

Which brings us to the punchline: as CNN’s Phil Mattingly writes, “instead of managing an economy in the midst of a natural rotation away from recovery and into a stable period of growth, economic officials are analyzing and modeling worst-case scenarios like what the shock of gas prices hitting $200 per barrel may mean for the economy.”

But unfortunately for Biden – and CNN which is hoping to reset expectations – it’s only going to get worse, because as we noted moments ago, while nobody was paying attention, Cushing inventories dropped to just 1 million away from operational bottoms at roughly 20MM barrels. This means that the US is officially looking at tank bottoms. 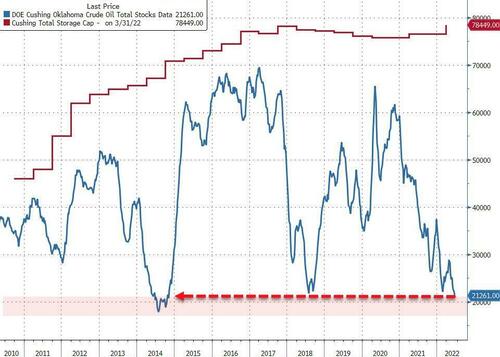 But wait, there’s more… or rather, it’s even worse, because as even Bloomberg’s chief energy guru Javier Blas notes, over the last 2 weeks, the US gov has drained 13.7 million barrels from the SPR, “and yet, commercial oil stockpiles still fell 3 million barrels over the period.”

Just imagine, Blas asks rhetorically, “if the SPR wasn’t there. Or what would happen post-Oct when sales end.”

And here is the punchline: at the current record pace of SPR drainage, one way or another the Biden admin will have to end its artificial attempts to keep the price of oil lower some time in October (or risk entering a war with China over Taiwan with virtually no oil reserve). This means that unless Putin ends his war some time in the next 5 months, there is a non-trivial chance that oil will hit a record price around $200 – precisely the price the White House is bracing for – a few days before the midterms. While translates into $10+ gasoline.

And while one can speculate how much longer Democrats can continue the “Jan 6” dog and pony show as the entire economy implodes around them, how America will vote in November when gas is double digits should not be a mystery to anyone.