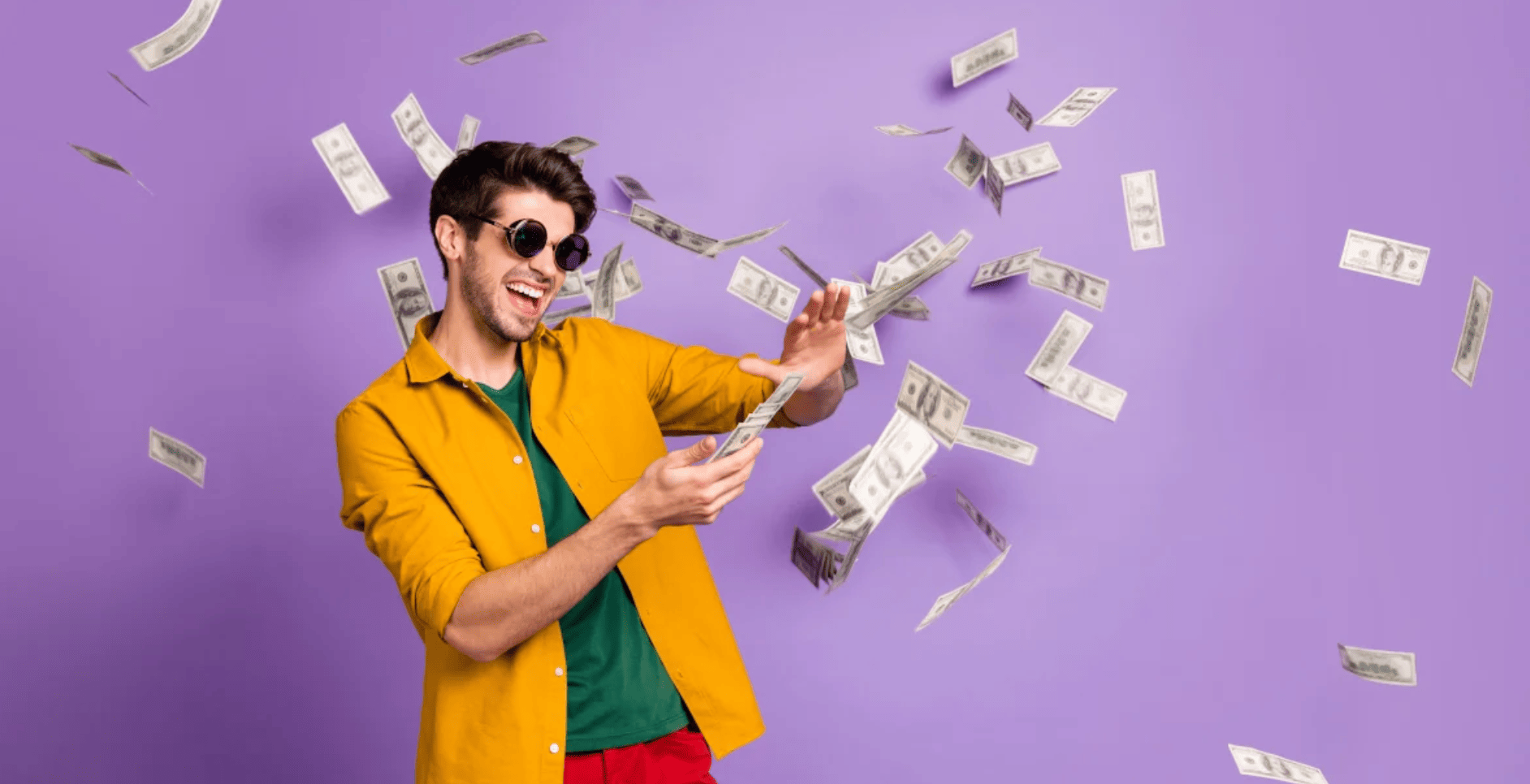 On September 3, 1783, after nearly a year of excruciating back-and-forth negotiations, all sides had finally gathered together in Paris to sign a historic peace agreement.

It was a pretty important peace deal. Because the Treaty of Paris, as it is now known, is what formally ended the American Revolution, and when Great Britain legally recognized the United States as an independent nation.

The treaty was signed in Paris because France had been a major supporter of the US war effort. And just as soon as the ink was dry, French King Louis XVI ordered his finance minister to prepare an accounting of exactly how much money France had spent on US independence.

The result was nothing short of astonishing—more than 1 billion livres.

To put that number in context, the French Treasury’s entire annual revenue only amounted to around 200 million livres.

So they had basically sunk FIVE YEARS worth of their tax revenue fighting someone else’s war.

Granted, Britain was still one of France’s main rivals. And the French did not care for British King George III.

But the American War was simply too costly, and France had already been on very shaky financial footing well before this point.

Louis XIV had nearly bankrupted the country a century before. His successor, Louis XV, had to drastically slash expenses and could barely hang on financially.

Then, in 1774, just prior to the American Revolution, Louis XVI became king at a time that France was rapidly deteriorating.

You’d think that with so much economic turmoil at home that he would have focused on his own national interests… and, in lieu of money, weapons, and ships, he would have instead sent the royal thoughts and prayers to America.

But no. Lucky for the United States, Louis XVI courageously fought the American Revolution down to the very last French taxpayer.

Only after the war did Louis finally take stock of the situation and realize the truth: America was in a much better position. Britain was bruised but still powerful. Yet his own

France was nearly bankrupt and desperately in need of cash. Not exactly a win/win.

Louis XVI was King, but his powers were limited; he was beholden to the legislature, called the Estates-General, and he couldn’t simply decree new taxes without their consent.

The King did, however, control the tax collectors. And Louis made sure they had every authority to coerce, harass, and intimidate money out of French citizens.

French tax collectors had the authority to walk right into people’s homes unannounced, conduct surprise inspections to look for hidden wealth, and walk away with whatever money or property they felt would satisfy the peasant’s tax bill.

This is actually a pretty common theme throughout history: governments that are on the ropes routinely resort to plundering the savings of their citizens.

Several ancient Roman emperors, in fact, from Diocletian to Valentinian III, famously sent ruthless tax collectors to harass their citizens and steal their wealth. Several ancient Chinese dynasties did the same thing. So did the declining Ottoman Empire.

Significantly ramping up tax collection efforts is typically a hallmark of an economy and empire in decline.

So we can’t be too surprised that, in its latest legislative bonanza, the US government is setting aside $80 billion for IRS tax collection efforts.

They’re calling the bill, of course, the Inflation Reduction Act. This is pure comedy—the legislation will do no such thing. Why would inflation, which in part was caused by excessive government spending, magically dissipate because of more government spending? It’s ludicrous.

But inflation aside, front and center in the legislation is $80 billion in funding for the IRS, primarily to step up its tax collection and enforcement efforts.

To put that number in context, the annual budget for the IRS is about $12 billion. So, even though the $80 billion will be leaked out over a period of several years, it constitutes a major increase in the IRS budget.

In other words, the tax gap represents how much they believe people are cheating. And the estimates vary wildly, from $100 billion per year to a whopping $1 trillion per year.

Frankly these numbers have always seemed to me like they were completely made up. No one has explained how they actually come up with such estimates. They just barf up some number and pretend that it’s true.

Obviously there are a whole lot of hardcore tax cheats out there, stealing and defrauding the system. But that’s not why the IRS is receiving an $80 billion boost.

This money will go to hire a small army of tax inspectors who will fan out across the nation on a giant fishing expedition that will ensnare countless middle class Americans and small businesses.

Certainly they’ll catch a few cheats along the way. And they may even find a few bucks to close that mythical ‘tax gap’.

But at what cost?

One of the biggest problems with the US economy right now is that it’s so much more difficult to produce goods and services.

Over the past few years, the people in charge have put up endless road blocks and obstacles for small business.

They vanquished the labor market and made it all but impossible to find workers. They destroyed the supply chain. They engineered historically high inflation. They came up with a myriad of costly new environmental and public health rules.

On top of that they constantly create new rules and regulations, many of which step far beyond the government’s authority.

(Last year, for example, the CDC Director decided in her sole discretion that she controlled the entire $10+ trillion US housing market.)

23% of full-time workers today require a government license to do what they do, according to the US Department of Labor. Even being a hairdresser is full of red tape and costly bureaucracy.

This new threat of widespread tax audits is going to be yet another obstruction to Americans’ productivity…. at a time when the economy desperately needs maximum focus.

Inflation is raging because there is a serious, global imbalance between the supply and demand of goods and services.

Specifically, demand is too strong because they doled out trillions of dollars in free money. And supply is weak because nearly every single government policy makes it harder for people to produce (which is yet another hallmark of empires in decline).

Now, on top of everything else, there is a very high likelihood of being harassed by the tax authorities.

Audits are incredibly unpleasant, costly, and time-consuming. Even if all of your accounts are in order and you’ve done nothing wrong, a tax audit monopolizes a tremendous amount of time and money.

It’s debilitating. Say goodbye to actually running your business, growing sales, or spending time with your family on nights and weekends… and say hello to preparing for your tax audit.

Your time will now be spent digging up receipts, finding old contracts, and trying to recall specific details of trivial decisions you made years ago.

Plus you’ll most likely have to pay outside experts to assist with the process, like CPAs and attorneys. And naturally the government does not reimburse you for such expenses. But at least you’ll get to deduct them… from your taxes.

In the end, after endless financial scrutiny, the government may conclude that you owe them a few bucks because of some undocumented deduction from several years ago. So you write them a check for some trivial sum… after having spent countless hours and effort taken away from your productivity.

The cost/benefit just doesn’t compute. And that’s why healthy, prosperous nations don’t engage in such absurd activities. They don’t need to.

But nations in decline don’t see it this way. For them, the pie is shrinking. So they think the only way to increase their slice is to go after other people’s crumbs.

Their efforts, instead, should be focused on making the pie bigger. But they don’t think that way.

Bear in mind this is all brought to you by the same people who are shoveling your tax dollars out the door to Ukraine $50 billion at a time. It’s very ‘Louis XVI’ of them.

All of these trends—the cannibalistic surge in tax authorities, the anti-productive regulations, the economic scarcity mentality—are all hallmarks of an empire in decline.

The situation is NOT terminal. It is NOT irreversible. But it is reason enough to have a Plan B.