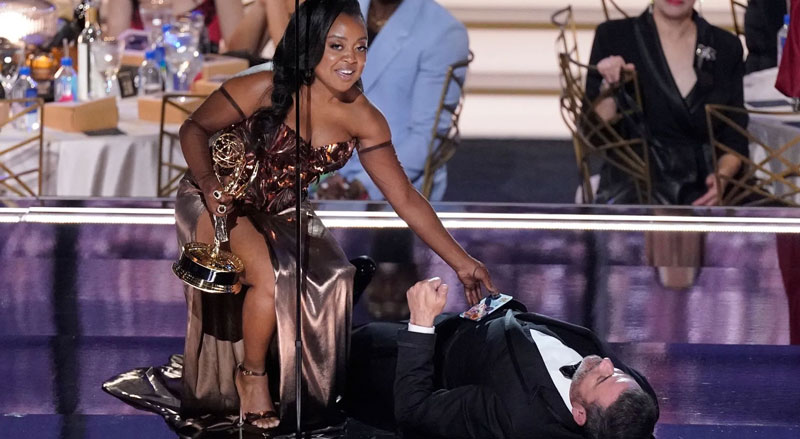 This year’s “woke” Primetime Emmy Awards has tanked in the TV ratings to record the lowest ever audience numbers.

The 74th Emmys dived 19 percent to an all-time low of just 5.9 million viewers.

The figure is another huge drop from the previous 6.4 million all-time low recorded in 2020.

Running a touch over three hours, the Emmys, which also streamed on Peacock, scored a 1.09/8 rating on NBC.

To add further context, the crowd tuning in for the 2022 Emmy Awards fell 41 percent from the 70th Primetime Emmy Awards in 2018.

Among the coveted 18-49 age demographic, the decline was just over 54%.

During Monday night’s award ceremony, Jimmy Kimmel pulled a stunt that has led to allegations of “white privilege.”

Following a wave of poor ratings, Kimmel was not asked to host this year.

However, he performed a skit at the show which severely backfired.

According to the New York Post, Kimmel is accused of trying to overshadow “Abbott Elementary” star-creator Quinta Brunson’s 2022 Emmys speech with a decidedly obnoxious sketch.

Footage of the stunt is going viral as “woke” awards-show fans rip the funnyman for allegedly ruining her big moment.

Many accused the host of epitomizing “white male privilege” with one critic writing, “If #QuintaBrunson stepping over #JimmyKimmel who literally laid in her spotlight on the day she won an Emmy isn’t a metaphor for what it means to be a WOC in a white mans world I don’t know what is.”

One angry Twitter post seconded their sentiment, writing: “Jimmy Kimmel owes Quinta an apology but the messed up part is every image of her accepting her award has his ass in it. White men really are insufferable.”