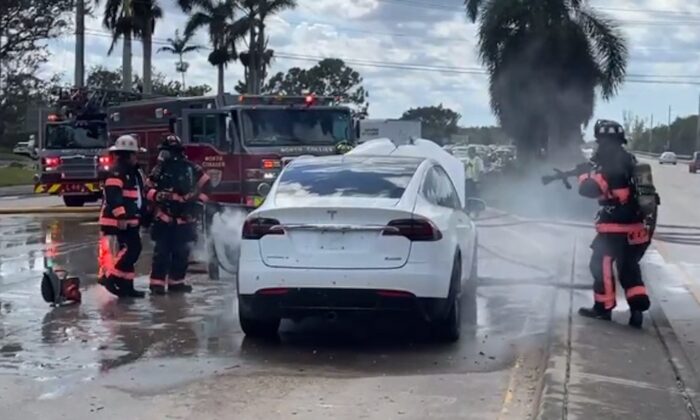 Firefighters in Florida are dealing with a new challenge in the wake of Hurricane Ian—waterlogged electric vehicle (EV) batteries erupting in flames.

Florida’s chief financial officer and state fire marshal, Jimmy Patronis, took to Twitter on Oct. 6 to warn of the increased numbers of incidents in which electric vehicle batteries have corroded amid the storm, prompting fires to begin.

“There’s a ton of EVs disabled from Ian. As those batteries corrode, fires start. That’s a new challenge that our firefighters haven’t faced before,” Patronis said. “At least on this kind of scale.”

Patronis shared a video alongside the tweet showing firefighters from the North Collier Fire Rescue (NCFR) attempting to put out smoke stemming from an EV in the middle of a busy road.

Patronis said that there is a “ton of EVs disabled from Ian.”

There’s a ton of EVs disabled from Ian. As those batteries corrode, fires start. That’s a new challenge that our firefighters haven’t faced before. At least on this kind of scale. #HurricaneIan pic.twitter.com/WsErgA6evO

Another man in the video can be heard saying that the vehicle will likely continue pouring out smoke “for days.”

In a follow-up tweet, Patronis said: “it takes special training and understanding of EVs to ensure these fires are put out quickly and safely.”

Officers from NCFR also warned of the increased risks posed by flooded EVs; re-tweeting advice from one Twitter user who explained that any EV that is waterlogged with salt water should be moved away from any structure due to the extreme risk of fire which is “difficult to extinguish.”

The Biden administration has regularly pushed for more sales of electric vehicles across the United States as part of the president’s aim to ensure that half of all new vehicles sold in 2030 are zero-emissions vehicles, in line with his goal of reducing emissions by 50 to 52 percent below 2005 levels by 2030.

Florida has the second-highest number of registered electric vehicles in the nation behind California, according to the Department of Energy. As of December 2021, there were more than 95,000 registered EVs in Florida, while California was home to 563, 070.

The auto insurance comparison website noted that while electric vehicles catch fire less often, they can be harder to put out than gas car fires, the lithium-ion batteries being the main cause of fires in EVs.

The latest warning from Florida’s state fire marshal comes shortly after all 50 states across the U.S. received final approval to start construction on a nationwide network of thousands of EV chargers covering approximately 75,000 miles of highway across the country.

They will now have access to all fiscal years 2022 and 2023 National Electric Vehicle Infrastructure (NEVI) Formula Program funding, totaling more than $1.5 billion for those two years. That funding was made possible by President Joe Biden’s infrastructure act which was signed into law last year.