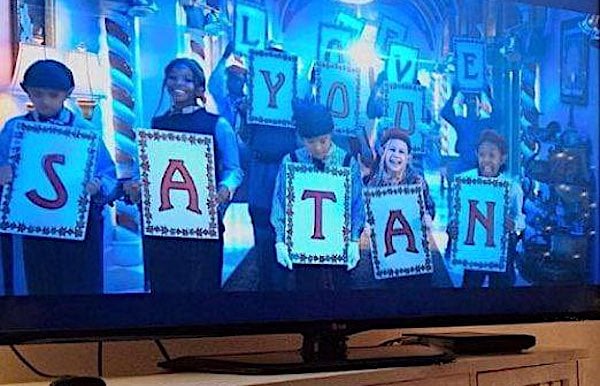 ‘They don’t hide their agenda anymore’

Disney has been in trouble lately. After the company adopted an aggressive pro-LGBT ideology and began installing it in products for children, unhappy parents canceled subscriptions, movie attendance collapse and its stock plunged.

Now the company’s agenda appears to not only include condemning traditional marriage beliefs, but promoting Satan.

The promotion is appearing in a new series called the “Santa Clauses,” a series on Disney+ that reboots the earlier “Santa Clause” feature films by Tim Allen.

A report at the Gateway Pundit noted, “Defenders of the series claim the scene where children are holding the letters which spell out ‘We Love You Satan’ is supposed to say ‘We Love You Santa’ and is just one of the many comedic scenes in the movies but parents aren’t laughing.

New Disney show for kids and “We love you satan”. They don’t hide they agenda anymore. pic.twitter.com/i3wDPTnYVO

The company on social media was accused of promoting its agenda: “They don’t hide the[ir] agenda anymore.”

The report noted that Disney’s direct-to-consumer division has reported some $1.5 billion in losses during a recent quarter.

One of the changes the company has made is to replace CEO Bob Chapek with former CEO Bob Iger.

The Gateway Pundit said, “Many parents canceled their Disney+ subscription after Disney went on a ‘woke’ brigade and even reportedly offered financial help to its employees’ children who wanted gender reassignment surgery.”

It questioned whether, “creating series which indoctrinate children to love satan is helping the company sell subscriptions.”