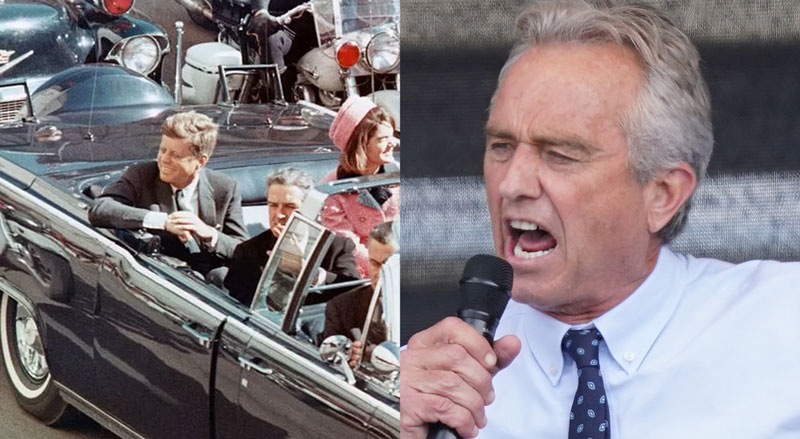 Robert F. Kennedy, Jr has accused the CIA of murdering his uncle, President John F. Kennedy, and described the killing as a “successful coup d’état” that America “has never recovered” from.

Kennedy was responding after The National Archives just released thousands of the never-disclosed JFK documents.

But not all of them were released despite 50 years passing since his death.

Around 3% of the JFK documents are still being withheld from the public.

The release consists of 13,173 documents relating to the official investigation into the 1963 assassination of President Kennedy.

Historians will be pouring over the documents looking for answers.

However, as Slay News previously reported, Fox News star Tucker Carlson said he spoke to someone who saw the hidden files.

“We spoke to someone who has access to these still hidden CIA documents,” Carlson said on his show.

“The person is deeply familiar with what they contain.

“We asked this person directly, did the CIA have a hand in the murder of John F. Kennedy, an American President.

“And here is the reply we received, verbatim: ‘The answer is yes. I believe they were involved. It’s a whole different country from what we thought it was. It’s all a fake.’”

“The most courageous newscast in 60 years,” Kennedy said.

“The CIA’s murder of my uncle was a successful coup d’état from which are democracy has never recovered.”

The most courageous newscast in 60 years. The CIA’s murder of my uncle was a successful coup d'état from which our democracy has never recovered. @TuckerCarlson https://t.co/qJ1sUdhe4t

According to the Guardian:

One of the newly released documents, dating from September 1964, underlines that point. At the request of the commission, the CIA had searched its own files for any connection between Oswald and Jack Ruby, the local nightclub owner who shot and killed Oswald on live television in the basement of Dallas police headquarters two days after the Kennedy assassination.

“Examination of Central Intelligence Agency files has produced no information on Jack RUBY or his activities,” the document states.

“The Central Intelligence Agency has no indication that RUBY and Lee Harvey OSWALD ever knew each other, were associated, or might have been connected in any manner.”

Thursday’s release of thousands of documents means that 95% of the CIA’s records on the assassination are now available to the public. As a final step there will be an “intensive one-year review” of any remaining closed files before a complete opening of the books by 30 June 2023.

The unveiling of the CIA documents has been delayed for years. In 1992, Congress ordered their full release by October 2017, but the deadline was pushed back by presidential decrees from both Donald Trump and Joe Biden.