Prepare For Change
Home Full Disclosure A ‘Cover-Up of Evidence of Mass Murder’: The CDC Appears to Be... 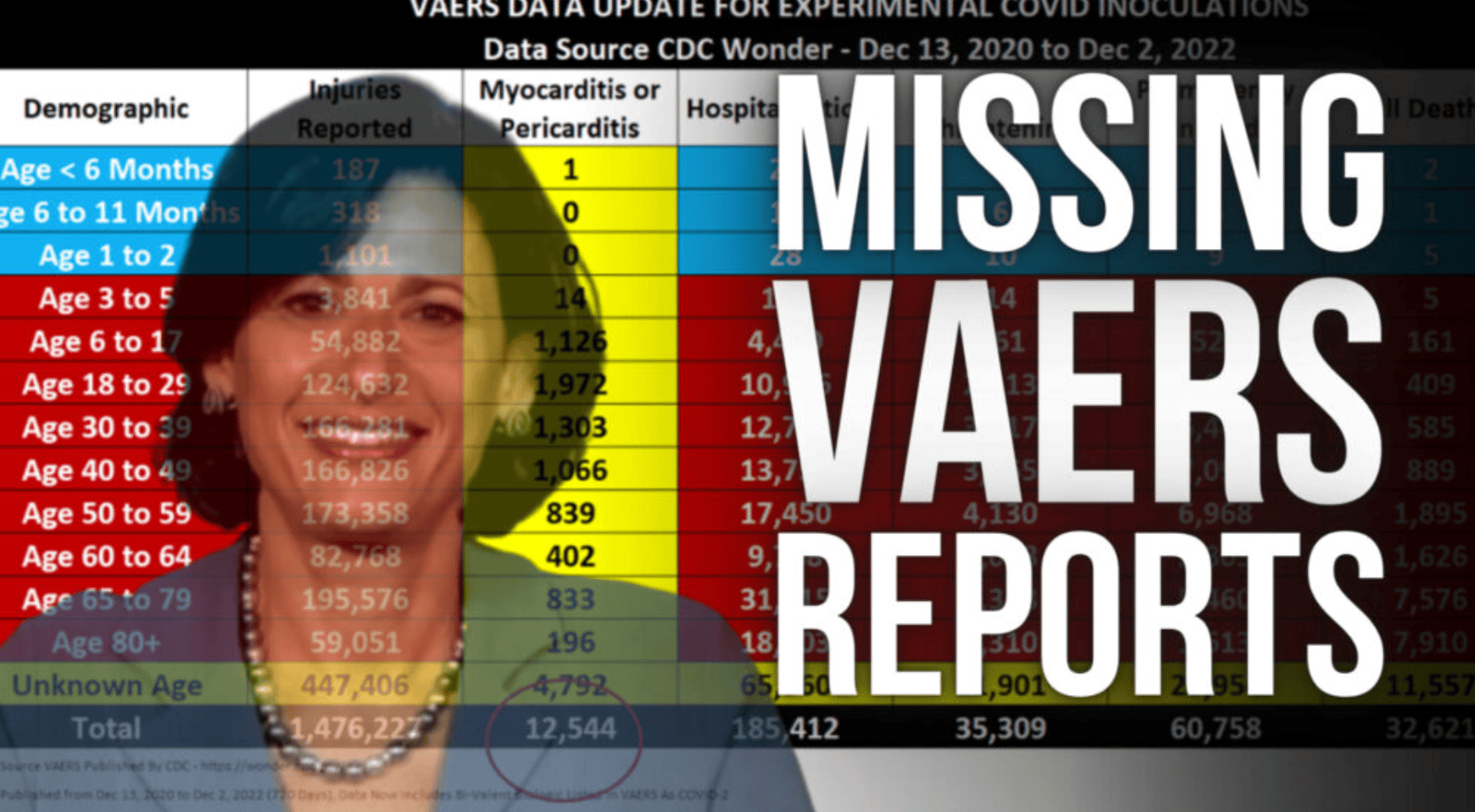 Something strange is going on with the VAERS system. Reports that were present three months ago are now inexplicably missing. And fewer than 4% of adverse events recorded in V-Safe have made their way to VAERS. This is the CDC’s database; Dr. Rochelle Walensky is in charge of it. And the agency’s failure to properly manage VAERS is suppressing the already-alarming safety signal of the Covid-19 shots.

Now, what is VAERS? VAERS stands for Vaccine Adverse Event Reporting System. As mentioned earlier, VAERS is a database put in place in 1990 under the supervision of the CDC. Reports of suspected vaccine adverse events take about half an hour to fill out, and 86% of the time, this is done by a doctor, nurse, paramedic, coroner, or healthcare professional when he or she believes the adverse event is related to a vaccine reaction. And because of its lengthy report process as well as the lack of awareness of the existence of VAERS, there is a general consensus of a severe underreporting factor for this database. To get a better idea of what’s going on with the CDC’s handling of the VAERS system, Dr. Naomi Wolf spoke with Dr. Henry Ealy, an expert on the database. Dr. Henry Ealy is the Founder & Executive Community Director for the Energetic Health Institute. He holds a Doctorate in naturopathic medicine and has been at the tip of the spear on the Grand Jury front — taking action to bring forth a Grand Jury investigation of the CDC for allegations of criminal data fraud and willful misconduct.

“You mentioned that V-Safe should be added to VAERS, but only 4% of V-Safe [adverse events have been] added. Can you explain what that means to people and why it matters?” asked Dr. Wolf.

Dr. Ealy explained, “VAERS is designed specifically for medical professionals and people alike to report, ‘Hey, I got hurt.’ And when enough people have gotten hurt for officials to look at it and say, ‘Hey, this product isn’t safe; it’s got to come off the market.’ V-Safe was created (by the CDC) to also do something similar to that — and to make that process a little bit easier. You don’t need as much information to record a report in V-Safe.” Dr. Ealy continues, “In V-safe, there have been over 800,000 reports of injury. And the deal was that in V-Safe, every single report of injury was supposed to also then subsequently have a VAERS report associated with it. So that means all 800,000 should be in VAERS. But unfortunately, or by design — however you want to look at it — only just over 30,000 of those 800,000 have been recorded in VAERS. So what that means is that fewer than 4% of the records in V-Safe have actually been reported in VAERS as they were supposed to be done.”

“What a sneaky way to basically sweep almost 800,000 adverse events under the rug,” remarked Dr. Wolf.

To add insult to injury, not only are the bulk of V-Safe reports not making their way to VAERS, but Dr. Ealy suspects that VAERS reports are being removed.

Specifically, he notes that between September 2022 and December 2022, the CDC has removed at least 32,844 records of injury related to the following conditions: myocarditis, pericarditis, and heart inflammation. What were 45,388 reports three months ago has now inexplicably dropped down to 12,544.

Dr. Ealy stresses he’s “triple-checked this,” and he stands by the allegation that the CDC is are removing or obfuscating records.

Dr. Jessica Rose has also reported similar issues with VAERS. She wrote on November 19, “The foreign data set was gutted this week in VAERS, and the cancer signal was halved. The myocarditis dose three response signal was lost, and 994 spontaneous abortions/stillbirths were dropped.”

So, from two credible sources, it is suspected that the CDC is removing records.

“It’s not an accident they would do this,” attested Dr. Ealy. “With Dr. Ladapo and Governor DeSantis coming out with that study about myocarditis and pericarditis, they’re trying to do everything they can to delete records to thwart what Governor DeSantis and (Florida) Surgeon General Dr. Ladipo are doing.” “I’m stunned,” expressed Dr. Wolf. “This is as big as the Pentagon Papers, easily, if indeed the CDC deleted those records. I’ve seen the screenshots; it looks pretty bad. And so, you’re saying that Dr. Ladapo and Governor DeSantis calling for a Grand Jury investigation could be the reason that they’re deleting these, basically, evidence of their crimes? Because Ladapo and DeSantis will be investigating that data? Is that what you’re saying?”

“Right,” confirmed Dr. Ealy. “When you read through the Grand Jury petition that Governor DeSantis signed and submitted to the Florida Supreme Court, they are putting a lot of what their argument based upon their findings with myocarditis. So myocarditis and pericarditis — and that’s not without good reason.” Dr. Ealy continues, “So the issue is — if you’re the CDC now — and you know you’ve been complicit in data fraud from day one, what do you start doing? Well, you’ve been deleting records for the last couple of years. Why not delete the records specific for myocarditis and pericarditis to try to thwart their attempts and try to discredit their analysis of what they’re doing? That’s what it looks like to me right now.”

“Well, yeah. It would definitely [be],” replied Dr. Ealy.

“The problem with VAERS as a federal system is yes, maybe if there is an erroneous record here or there, you should have the ability to delete it. But when you started seeing the CDC deleting hundreds of thousands of records and removing, in this case, over 32,000 records, or at least removing the search term. That’s my suspicion here — that they didn’t delete the record. What they deleted was that word — ‘myocarditis’ or ‘pericarditis or ‘heart inflammation’ in the actual report. And so, that’s modification of official records. And when you do that, that’s now criminal fraud — again. And, of course, it throws off our ability to really understand what’s going on with this because we rely on systems like this to give us information for making decisions.”

Dr. Wolf argues the CDC’s actions appear to be a “cover-up of evidence of mass murder.” And she pleads Governor DeSantis and Surgeon General Ladapo to get in touch with Dr. Ealy’s team “because what you all have uncovered is absolutely stunning.” “And this latest, which you’ve presented, should be on the cover of every newspaper and every magazine and every news site in the world. This is huge if, indeed, they’re concealing myocarditis outcomes.”