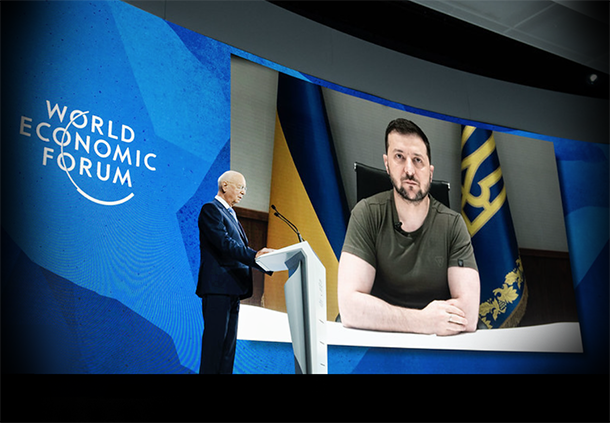 Natalia Holub reacts over the coffin holding the body of her son Volodymyr Yezhov, a Ukrainian serviceman and game designer for the world-renowned games, ‘S.T.A.L.K.E.R.’ and ‘Cossacks’, in Kyiv. Yezhov was recently killed in a fight against Russian troops near the town of Bakhmut.

Ukrainian President Volodymyr Zelensky said his government is preparing to participate in the World Economic Forum (WEF) in Davos in January and that he spoke again with BlackRock Inc CEO Larry Fink about the postwar rebuilding effort.

“Specialists of this company are already helping Ukraine to structure the fund for the reconstruction of our state,” Zelensky, who had a video call with Fink in September, said in his evening address to the nation. He didn’t say whether he would attend the January 16-20 WEF in person or participate virtually.

Zelensky also said that he spoke to Italian Prime Minister Giorgia Meloni and raised the prospect of Italy contributing to the strengthening of Ukraine’s air defences.

Russian forces continued offensive operations around Bakhmut and Avdiyivka in the eastern Donetsk region, while trying to improve their tactical position on the Lyman axis to the north, Ukraine’s General Staff said on Facebook. According to the statement, Russian troops carried out a missile strike and launched 33 barrages with multiple-rocket systems over the past day, including targeting civilian facilities in the southern city of Kherson.

The General Staff did not mention any Russian air strikes in its morning update for the second day in a row, suggesting a drop in Russian air force activity after this week’s drone attack on a base in southern Russia. 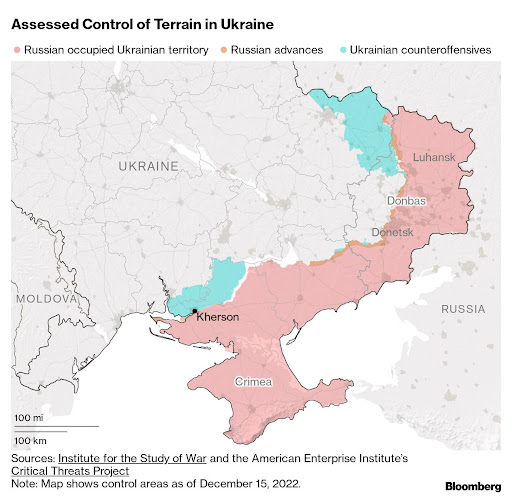 The head of the German lower house of parliament’s intelligence oversight committee said the recent unmasking of an alleged Russian spy at the country’s foreign intelligence service suggests authorities have only been “half switched on” to the threat of infiltration by the Kremlin in recent years.

“What everyone needs to take on board is that there are still intense intelligence activities going on like during the Cold War, and at a time when Russia is conducting an illegal war against Ukraine we have to keep a very sharp eye on this,” Konstantin von Notz, a Bundestag lawmaker for the ruling Greens party, said in an interview with Deutschlandfunk radio.

“I would be very pleased if this unfortunate case would prompt us to take a critical look so that we are in better shape for the future.”

Meanwhile, Kyiv’s electricity supply is limited but stable and is being evenly distributed through temporary grid reconnection measures, Serhiy Kovalenko, the head of power company Yasno, said on Facebook.

It’s “difficult to predict” how reliably the equipment will cope with lower temperatures and higher consumption, he added, also pointing to the threat of Russian missile and drone attacks. Emergency cutoffs will continue in the Ukrainian capital through the winter, the deputy head of Kyiv’s city administration, Petro Panteleev, said earlier on television.

The Office of the UN High Commissioner for Human Rights has recorded 17,831 civilian casualties in Ukraine between the end of February when Russia launched its full-scale invasion and December 26, including 6,884 killed and 10,947 injured.

“Most of the civilian casualties recorded were caused by the use of explosive weapons with wide area effects, including shelling from heavy artillery, multiple launch rocket systems, missiles and air strikes,” the OHCHR said in a statement. The actual figures are likely considerably higher, as information from some locations where hostilities are especially intense has been delayed and many reports are still awaiting corroboration, it said.

About 700 critical infrastructure facilities in Ukraine, including gas pipelines, power substations and bridges, have been damaged since Russia invaded, according to Yevhen Yenin, a deputy interior minister.

In total, more than 35,000 facilities across the country have been destroyed as a result of Russian attacks, Yenin said on television late Tuesday.