NEW YORK — The United Nations General Assembly passed more resolutions critical of Israel than against all other nations combined in 2022, contributing to what observers call an ongoing lopsided focus on the Jewish state at the world body.

The General Assembly approved 15 anti-Israel resolutions last year, versus 13 resolutions criticizing other countries, according to a tally by the pro-Israel monitoring group UN Watch.

Russia was the focus of six resolutions condemning its invasion of Ukraine. North Korea, Afghanistan, Myanmar, Syria, Iran and the US were hit with one resolution each.

Saudi Arabia, China, Lebanon, Turkey, Venezuela and Qatar, which have poor human rights records or were involved in regional conflicts, were not dinged by any resolutions criticizing them.

Since 2015, the General Assembly has adopted 140 resolutions criticizing Israel, mainly over its treatment of the Palestinians, its relationships with neighboring countries and other alleged wrongdoings. Over the same period, it has passed 68 resolutions against all other countries, UN Watch said.

In the 193-nation assembly’s most recent anti-Israel resolution Friday, it approved a call for the International Court of Justice to weigh in on the Israeli-Palestinian conflict.

The resolution promoted by the Palestinians passed by a vote of 87 in favor, 26 against, with 53 abstentions. 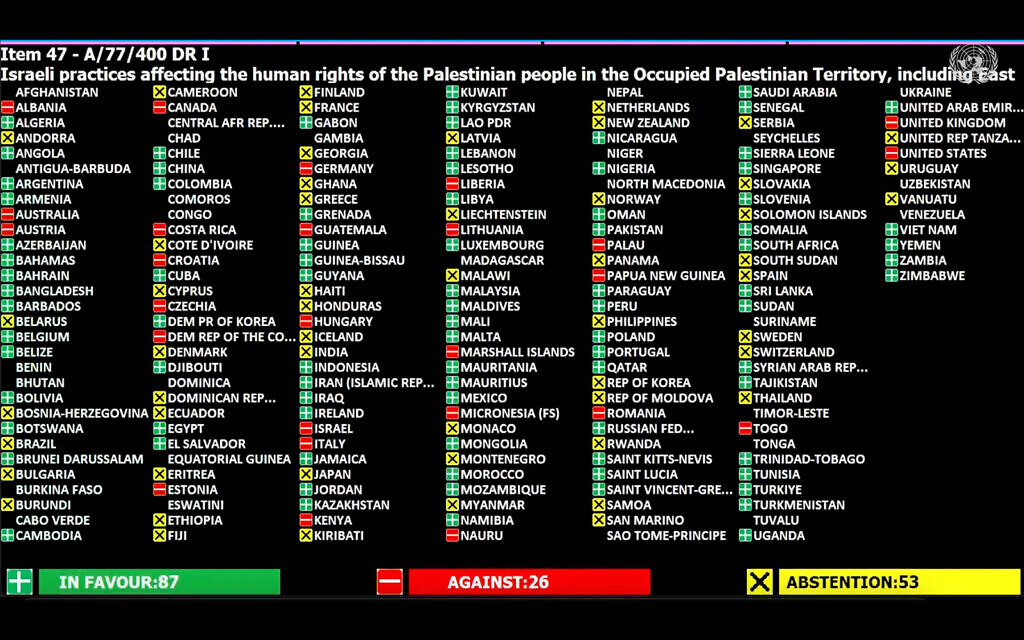 A UN General Assembly vote December 30, 2022, on a resolution requesting the International Court of Justice to weigh in on the Israeli-Palestinian conflict. (Screenshot/UN)

The resolution, titled “Israeli practices and settlement activities affecting the rights of the Palestinian people and other Arabs of the occupied territories,” calls on the Hague-based ICJ to “render urgently an advisory opinion” on Israel’s “prolonged occupation, settlement and annexation of Palestinian territory.”

The ICJ is the top UN court for mediating disputes between countries. Its rulings are binding and influence public opinion but it has no mechanism for enforcement. The court is separate from the International Criminal Court, which is also in The Hague.

Other anti-Israel measures in the past year focused on the “occupied Syrian Golan,” Palestinian refugees, nuclear proliferation, pollution in Lebanon, settlements and the stalled peace process.

The UN has a long history of passing resolutions against Israel, and Israel and the US accuse it of bias. Israel has accused the Palestinians, who have nonmember observer state status at the UN, of trying to use the world body to circumvent peace negotiations.

Israel has blasted the ICJ resolution as biased and dismissive of Israeli security concerns. Former prime minister Yair Lapid waged a diplomatic campaign, contacting over 50 world leaders, to muster opposition to the move. 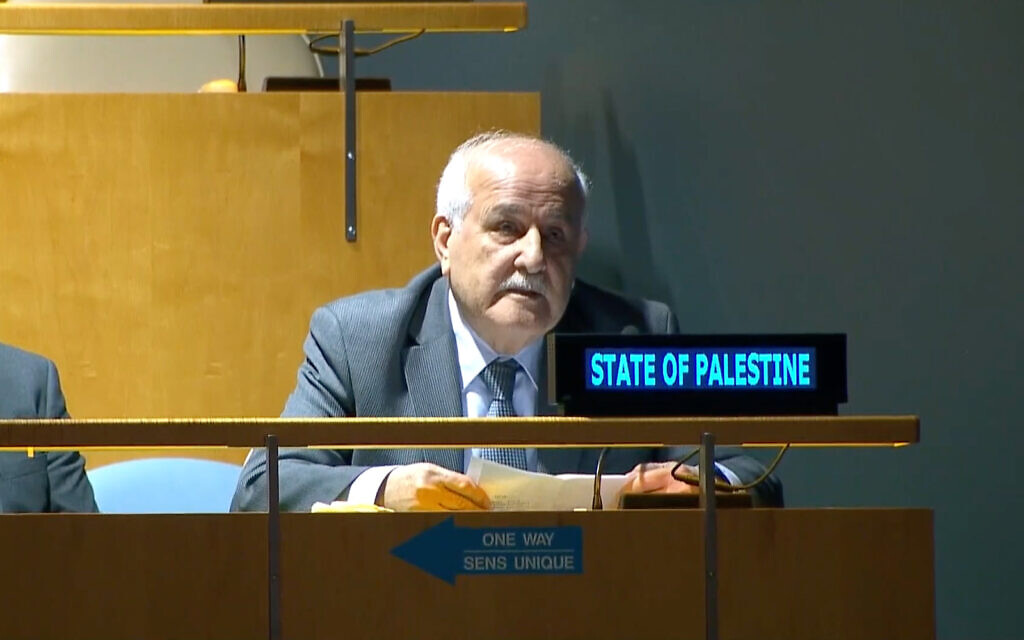 The Palestinian envoy to the UN, Riyad Mansour, addresses the General Assembly at the UN Headquarters in New York, December 30, 2022. (Screenshot/UN)

Israel’s UN envoy, Gilad Erdan called the resolution a “moral stain” and criticized it for referring to Jerusalem’s Temple Mount only by its Arabic name, and for holding the vote during Shabbat.

In a strongly worded statement, Prime Minister Benjamin Netanyahu said Israel would not be bound by the “despicable decision.”

Netanyahu’s new hardline government, sworn in on Thursday, is likely to further stoke tensions with the UN and the international community. 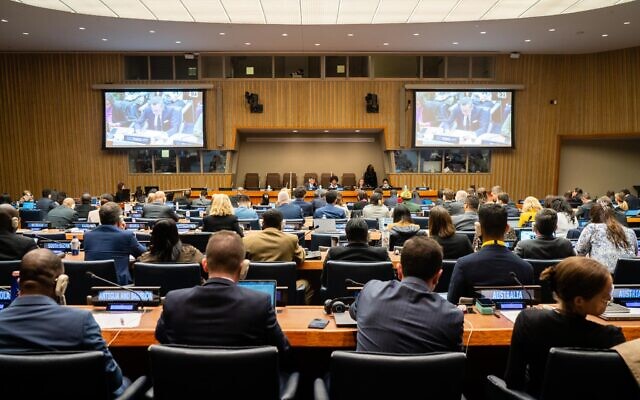 Of Netanyahu’s coalition partners, none are on record supporting a two-state solution with the Palestinians, some support annexing the West Bank without granting equal rights to Palestinians in those areas, and many also vehemently oppose coordination or strengthening the PA.

In addition to resolutions, there are two open-ended UN investigations into Israel, the only country under such scrutiny. Members of both probes are harshly critical of Israel and are on the record making antisemitic statements.

The UN special rapporteur leading one of the investigations, whose antisemitic comments were exposed in a Times of Israel investigation last month, said last week that Israel was barring her from entering Palestinian areas. The Foreign Ministry did not respond to a request for comment.