Lord Montagu Norman (the Governor of the Bank of England) in the right, Hjalmar Schacht (President of the Reichsbank and Minister of Economics in the Hitler’s government) in the left.

The war was not unleashed by frenzied Fuhrer who happened to be ruling Germany at the time. WWII is a project created by world oligarchy or Anglo-American “money owners”. Using such instruments as the US Federal Reserve System and the Bank of England they started to prepare for the next world conflict of global scale right after WWI. The USSR was the target.

The Dawes and Young Plans, the creation of Bank of International Settlements (BIS), the Germany’s suspension of reparations payments it had to pay according to Paris Peace Treaty and the acquiescence of Russia’s former allies in this decision, large-scale foreign investments into the economy of Third Reich, the militarization of German economy and the breaches of Paris Treaty provisions – they all were important milestones on the way of preparing the war.

There were key figures behind the plot: the Rockefellers, the Morgans, Lord Montagu Norman (the Governor of the Bank of England), Hjalmar Schacht (President of the Reichsbank and Minister of Economics in the Hitler’s government).

The strategic plan of Rockefellers and Morgans was to subjugate Europe economically, saturate Germany with foreign investments and credits and make it deliver a crushing blow against the Soviet Russia so that it would be returned into the world capitalist system as a colony.

Montagu Norman (1871 – 1950) played an important role of go-between to keep up a dialogue between American financial circles and Germany’s business leaders. HjalmarSchacht organized the revival of Germany’s defense sector of economy.

The operation conducted by “money owners” was covered up by such politicians as Franklin Roosevelt, Neville Chamberlain and Winston Churchill. In Germany the plans were carried out by Hitler and Hjalmar Schacht. Some historians say Hjalmar Schacht played a more important role than Hitler. Simply Schacht kept away from spotlight.

The Dawes Plan was an attempt following World War I for the Triple Entente to compromise and collect war reparations debt from Germany. The Dawes Plan (as proposed by the Dawes Committee, chaired by Charles G. Dawes) was an attempt in 1924 to solve the reparations problem, which had bedeviled international politics following World War I and the Treaty of Versailles (France was reluctant to accept it got over 50% of reparations).

In 1924-1929 Germany got $2, 5 billion from the United States and $ 1, 5 billion from Great Britain, according to Dawes Plan. In today’s prices the sum is huge, it is equal to $1 trillion of US dollars. Hjalmar Schacht played an active role in the implementation of Dawes Plan.

In 1929 he summed up the results, saying that in 5 years Germany got more foreign loans that the United States in the 40 years preceding WWI. As a result, in 1929 Germany became the world’s second largest industrial nation leaving Great Britain behind.

In the 1930s the process of feeding Germany with investments and credits continued. The Young Plan was a program for settling German reparations debts after World War I written in 1929 and formally adopted in 1930.

It was presented by the committee headed (1929–30) by American industrialist Owen D. Young, creator and ex-first chairman of Radio Corporation of America (RCA), who, at the time, concurrently served at board of trustees of Rockefeller Foundation, and also had been one of representatives involved in previous war reparations restructuring arrangement – Dawes Plan of 1924.

According to the plan, the Bank of International Settlements (BIS) was created in 1930 to make Germany pay reparations to victors. In reality the money flows went in quite a different direction – from the United States and Great Britain to Germany. The majority of strategically important German companies belonged to American capital or were partly under its control.

Some of them belonged to British investors. German oil refinery and coal liquefaction sectors of economy belonged to Standard Oil (the Rockefellers). FarbenindustrieAG chemical industry major was moved under the control of the Morgan Group. 40% of telephone network and 30% of Focke Wulf shares belonged to American ITT.

Radio and AEG, Siemens, Osram electrical industry majors moved under the control of American General Electric. ITT and General Electric were part of the Morgan’s empire. At least 100% of the Volkswagen shares belonged to American Ford. 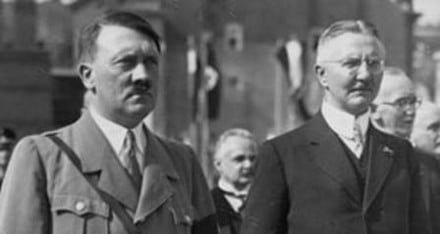 On January 30, 1933 Hitler was named the Chancellor of Germany. Before that his candidacy had been thoroughly studied by American bankers. Hjalmar Schacht went to the United States in the autumn of 1930 to discuss the nomination with American colleagues. The Hitler’s appointment was finally approved at a secret meeting of financiers in the United States. He spent the whole 1932 trying to convince the German bankers that Hitler was the right person for the position. He achieved the goal.

In mid-November 1932 17 German largest bankers and industrialists sent a letter to President Hindenburg expressing their demand to make Hitler the Chancellor of Germany.

The last working meeting of German financiers before the election was held on January 4, 1933 in Kölnat the home of banker Kurt von Schröder. After that the National Socialist Party came to power. As a result, the financial and economic ties of Germany with Anglo-Saxons elevated to a higher level.

Hitler immediately made an announcement that he refused to pay postwar reparations. It put into doubt the ability of England and France to pay off WWI debts to the United States.

Washington did not object to the Hitler’s announcement. In May 1933 Hjalmar Schacht paid another visit to the United States. There he met with President Franklin Roosevelt and big bankers to reach a $1 billion credit deal.

In June the same year HjalmarSchacht visited London to hold talks with Montagu Norman. It all went down smoothly. The British agreed to grant a $2 billion loan. The British offered no objections related to the Germany’s decision to suspend debt payments.

Some historians say the American and British bankers were pliant because by 1932 the Soviet Union had fulfilled the 5-year economic development plan to make it achieve new heights as an industrial power. A few thousand enterprises were built, especially in the sector of heavy industry.

The dependence of USSR on import of engineering production has greatly dwindled. The chances to strangle the Soviet Union economically were practically reduced to zero. They decided to rely on war and launched the runaway militarization of Germany.

It was easy for Germany to get American credits. By and large, Hitler came to power in his country at the same time as Franklin Roosevelt took office in the United States. The very same bankers who supported Hitler in 1931 supported Roosevelt at the presidential election. The newly elect President could not but endorse large credits to Germany.

By the way, many noticed that there was a big similarity between the Roosevelt’s “New Deal Policy” and the economic policy of the German Third Reich. No wonder. The very same people worked out and consulted the both governments at the time. They mainly represented US financial circles.

The Roosevelt’s New Deal soon started to stumble on the way. In 1937 America plunged into the quagmire of economic crisis. In 1939 the US economy operated at 33% of its industrial capacity (it was 19% in the heat of the 1929-1933 crisis).

Rexford G. Tugwell, an economist who became part of Franklin Roosevelt’s first “Brain, a group of Columbia University academics who helped develop policy recommendations leading up to Roosevelt’s New Deal,wrote that in 1939 the government failed to reach any success.