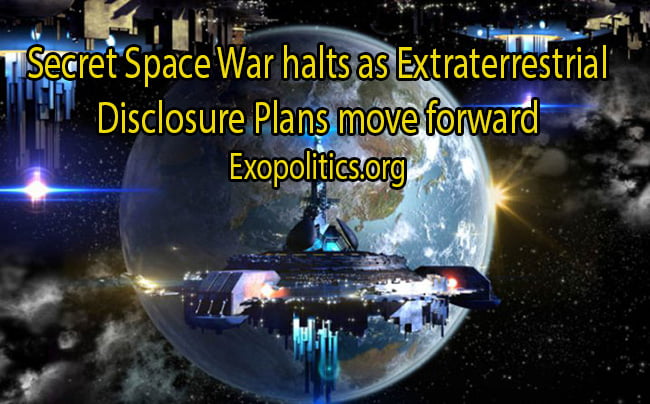 Large scale hostilities in an undeclared war being fought in deep space, Mars and on Earth between two secret space program alliances have come to a temporary halt according to the latest in a series of disclosures by secret space program whistleblower, Corey Goode (aka GoodETxSG). In part one of his responses to a new set of questions (see below), Corey describes a complex planetary situation involving multiple space programs, both modern and ancient, and extraterrestrial civilizations in a struggle for dominance over how much information and technology will be released to the rest of surface humanity. For some, Corey’s disclosures are a product of fertile imagination appropriate for a coming Star Wars episode. There is good reason, however, to seriously consider Corey’s information as possibly the most comprehensive disclosures ever to emerge of what is really happening behind the scenes in the most highly classified space programs taking place on Earth and our solar system.

According to Corey, on the one side of the conflict is a positive (service-to-other) Secret Space Program (SSP) Alliance comprising the first secret space program created by the U.S. military, “Solar Warden,” and its allies, a number of ancient human space programs and friendly human-looking extraterrestrial races that is genetically linked to humanity. The “SSP Alliance” essentially wants surface humanity to learn the truth about its ancient space programs, extraterrestrial visitation, and free energy technologies. Most significantly, the SSP Alliance wants to put an end to an exploitative global financial system that has economically enslaved much of humanity.

On the other side of the undeclared war is a negative (service-to-self) alliance comprising the first corporate run space program called the Interplanetary Corporate Conglomerate and its allies. These comprise ancient Earth bloodline families called the Cabal/Illuminati; Reptilian extraterrestrials called the Dracos that come from outside our solar system. Finally, this negative alliance comprises portions of a “Dark Fleet” comprising humans connected directly or ideologically to the former Nazi SS that normally operate outside the solar system, but were trapped inside a recently imposed solar system wide quarantine. In his answers to questions below, Corey refers to this negative alliance as the Cabal/ICC/Draco/Dark Fleet or more simply as the “Cabal led SSPs”.

According to Corey in his latest disclosures, the recent halt in large scale hostilities has come at the request of a third, recently arrived group of extraterrestrials called the “Sphere Alliance.” Corey claims that the Blue Avians, one of the five extraterrestrial civilizations making up the Sphere Alliance have been physically contacting him and taking him to various diplomatic meetings where the conflicting forces have held dialogues. The Sphere Alliance, according to Corey, have far superior technology to any of the conflicting space program alliances, and have implemented a solar system wide quarantine. This has created havoc with “Cabal led SSPs” that previously were the dominant power on Earth and the Solar System, but are rapidly losing power to the SSP Alliance. This has led to growing defections from the Cabal led SSPs to the SSP Alliance which Corey is communicating directly with through an unnamed Lt Colonel.

In his responses to questions below, Corey describes the complex dynamics of the conflict outlined above, the outcomes of recent diplomatic meetings, SSP Alliance problems with handling defectors who are overly eager to launch armed attacks against their former Cabal led SSPs allies, and why the Cabal led SSPs alliance is crumbling. He describes two SSP Alliance attacks that led to many civilian deaths on Mars and underground Earth bases, thereby leading to the Sphere Alliance request for an end to large scale hostilities. Corey discusses a “controlled disclosure” plan by the Cabal led SSPs that will attempt to deceive people in a way that perpetuates Cabal control. He contrasts this with the SSP Alliance disclosure plan of massive official document dumps (like Wikileaks) and television broadcasts that will reveal the truth about humanity’s situation, and lead to Nuremburg War Crime like trials against (former) leaders of the Cabal led SSPs.

Corey’s information in the responses below is very detailed, and deserve serious attention.  For more information on Corey’s SSP background and why his claims are very likely the most comprehensive disclosures ever about SSP activities, please read here and here. In part two, we will turn to the darker side of activities performed by the Cabal led SSPs, and why the Sphere Alliance requested Corey to start revealing these disturbing activities.

Q1.     You have described a conflict between a Secret Space Program (SSP) Alliance and the Cabal/ICC/Draco Assets that has periodically flared into armed warfare in various locations on Earth and other parts of our solar system. Can you share details about where these hostilities have taken place, and why the Sphere Beings has requested the SSP Alliance to cease large scale attacks against the Cabal/ICC/Draco infrastructure?