Prepare For Change
Home Healing National Children’s Leukemia Foundation Shut Down: This Is Why It’s OK Not...

5 or 6 years ago this innocent teen-age boy came to my door collecting money for the cancer institute.  I “popped” his bubble, so to speak.  I told him basically what this articles does.  I’m sure I was the only one who spoke the truth to him that day.  Read on . . . .

“Everyone should know that most cancer research is largely a fraud, and that the major cancer research organisations are derelict in their duties to the people who support them.” (source)

The statement above comes from Linus Pauling, Ph.D, and two time Nobel Prize winner in chemistry (1901-1994). He is considered one of the most important scientists in history. Clearly a very intelligent man, and one of many others with similar beliefs who work directly within the medical field. These beliefs don’t just come out of thin air, they come from research and proof. Although it can be a scary thing to consider, the fact of the matter is that various cancer charities are indeed largely fraudulent, and unfortunately we now have another example to add to the growing list of cases.

The Brooklyn-based National Children’s Leukemia Foundation has been shut down. This comes years after they raised millions of dollars through professionally run fundraisers.  They lured people in, claiming that the funds would be used to conduct cancer research and locate bone marrow donors, while they ran their “Make a Dream Come True” campaign. (source)(source)

Unfortunately, less than 1 percent of the millions of donated dollars actually went to providing help for leukemia patients. Between 2009 and 2013, a total of almost 10 million dollars was donated.

We’ve seen similiar happenings with other ‘charity’ organizations. For example, the Red Cross and Haiti earthquake relief. You can read more about that story here.

“A one-man operation, run by founder Zvi Shor, 64, out of the basement of his Brooklyn home.” (source)

The statement above comes from New York attorney General Eric T. Schneiderman, his office recently filed a petition with the Kings County Supreme Court in Brooklyn, stating that:

“Less than $58,000 (less than 1 percent) of the $9.7 million raised by the NCLF actually went to providing assistance to leukaemia patients. More than 80 percent of the money is said to have gone to funding telemarketing and direct-mail fund-raising campaigns.” (source)

These are some disturbing facts, and it’s not the first time that a major cancer charity has come into question, not by a long shot. For example, a complaint filed by the Federal Trade Commission describes four connected groups, all with cancer in their name, as “sham charities,” saying they instead “operated as personal fiefdoms characterized by rampant nepotism, flagrant conflicts of interest, and excessive insider compensation.” One of those names was the Cancer Fund of America Inc. These groups stand accused of taking in almost 200 million dollars. (source)

It’s not just the fraud when it comes to money, it’s also about the research being done by legitimate cancer charities.

Most of the money donated to cancer research is spent on animal research, which has been deemed completely useless by many. For example, in 1981 Dr. Irwin Bross, the former director of the Sloan-Kettering Cancer Research Institute (the largest cancer research institute in the world), said that:

“The uselessness of most of the animal model studies is less well known. For example, the discovery of chemotherapeutic agents for the treatment of human cancer is widely-heralded as a triumph due to use of animal model systems. However, here again, these exaggerated claims are coming from or are endorsed by the same people who get the federal dollars for animal research. There is little, if any, factual evidence that would support these claims. Practically all of the chemotherapeutic agents which are of value in the treatment of human cancer were found in a clinical context rather than in animal studies.” (source)

Today, treating illness and disease has a corporate side. It is an enormously profitable industry, but only when geared towards treatment, not preventative measures or cures, and that’s an important point to consider.

One simple example of a preventative measure would be to reduce your pesticide exposure. Studies have shown that eating an organic diet reduces pesticide levels in your body by almost one hundred percent. (source 1)(source 2)

The list of preventative measures goes on and on, but that’s a topic for another article.

So next time you are asked to donate towards cancer research and don’t feel comfortable doing so, don’t feel bad about it. There is a multi-trillion dollar incentive for pharmaceutical companies to patent treatments that we have to keep on using. It’s a shame that we never hear about treatments which have shown to completely annihilate cancer cells, cannabis being one of them, but still no human clinical trials…

Take The 30 Days of YOU Challenge! 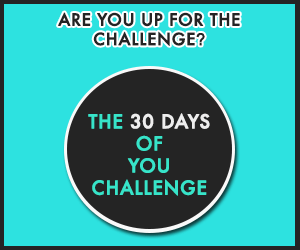 Take the free 30 Days of You Challenge and discover more about your heart, mind and soul.

There are powerful benefits associated with taking time to relax, meditate, do things you love etc, but that means taking YOU time!

This challenge will help you set out on a journey to getting powerful habits started that can transform your life.

Join the free challenge and get the full guidelines on how to do it as well as support throughout the challenge.