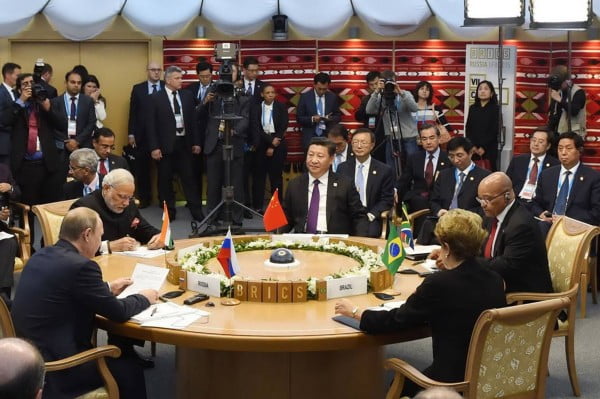 The $100 billion BRICS Contingent Reserve Arrangement (CRA) has become fully operational following the inaugural meetings of the BRICS CRA Board of Governors and the Standing Committee in the Turkish capital of Ankara.

“The first meetings of the governing bodies mark the start of a full-scale operation of the BRICS Contingent Reserve Arrangement as an international institution with activities set to enhance and strengthen cooperation,” said a Russian Central Bank statement on Friday.

BRICS leaders Xi Jinping, Vladimir Putin, Jacob Zuma, Narendra Modi and Dilma Rousseff witnessed the signing of the agreement on the CRA in the Brazilian city of Fortaleza in July 2014.

China will provide the bulk of the funding with $41 billion, Brazil, Russia and India with $18 billion each, and South Africa with $5 billion.

The CRA is meant to provide an alternative to International Monetary Fund’s emergency lending. In the CRA, emergency loans of up to 30 per cent of a member nation’s contribution will be decided by a simple majority. Bigger loans will require the consent of all CRA members.

Meanwhile, Finance Ministers from the five BRICS countries have met in Ankara on the sidelines of the G20 meeting of global finance ministers and central bankers, amid growing worries about the state of the global economy.

With a looming US federal Reserve rate hike and Chinese market turbulence sending shock waves through emerging markets, the IMF has lowered its global growth forecast.

A G20 communique after their two-day meeting in the Turkish capital Ankara noted that global growth was falling short of expectations.

“Global growth falls short of our expectations. We have pledged to take decisive action to keep the economic recovery on track and we are confident the global economic recovery will gain speed,” the statement said.

The G20 vowed to “carefully calibrate and clearly communicate our actions … to minimise negative spillovers, mitigate uncertainty and promote transparency”.

As the BRICS countries launched new financial institutions like the $100 billion BRICS Bank, the China-led Asia Infrastructure Investment Bank, and a $100 billion BRICS currency reserve fund, the IMF has once again delayed voting reforms to give emerging countries greater say.