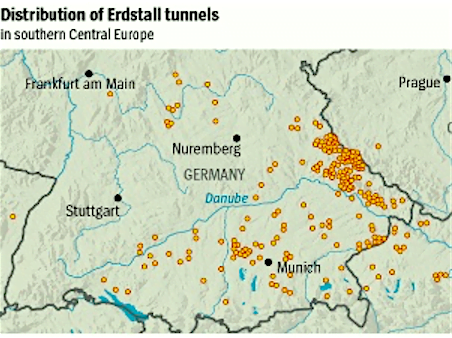 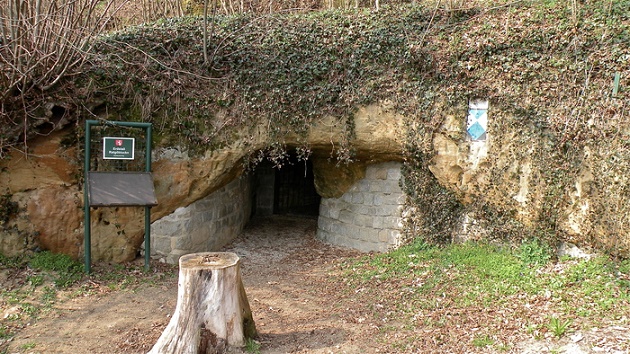 There are more than 700 curious tunnel networks in Bavaria, but their purpose remains a mystery. Were they built as graves for the souls of the dead, as ritual spaces or as hideaways from marauding bandits? Archeologists are now exploring the subterranean vaults to unravel their secrets.

Beate Greithanner, a dairy farmer, is barefoot as she walks up the lush meadows of the Doblberg, a mountain in Bavaria set against a backdrop of snow-capped Alpine peaks. She stops and points to a hole in the ground. “This is where the cow was grazing,” she says. “Suddenly she fell in, up to her hips.”

A crater had opened up beneath the unfortunate cow.On the day after the bovine mishap, Greithanner’s husband Rudi examined the hole. He was curious, so he poked his head inside and craned his neck to peer into the darkness. Could it be a hiding place for some sort of treasure, he wondered? As he climbed into the hole to investigate, it turned out to be a narrow, damp tunnel that led diagonally into the earth, like the bowels of some giant dinosaur.

Suddenly the farmer could no longer hear anything from above. He panicked when he realized that it was getting difficult to breathe the stifling air — and quickly ended his brief exploration.

The Greithanners, from the town of Glonn near Munich, are the owners of a strange subterranean landmark. A labyrinth of vaults known as an “Erdstall” runs underneath their property. It is at least 25 meters (82 feet) long and likely stems from the Middle Ages. Some believe that it was built as a dwelling for helpful goblins.

The geologists and land surveyors who appeared on Greithanner’s property at the end of June were determined to get to the bottom of the mystery. Three members of a group called the “Working Group for Erdstall Research,” wearing red protective suits and helmets, dragged the heavy concrete plate away from the entrance and disappeared into the depths.

Their leader, Dieter Ahlborn, began by crawling through a passageway only about 70 centimeters (2 foot 3 inches) high. His colleague Andreas Mittermüller had to return to the surface when the lack of oxygen in the tunnel gave him a headache. Ahlborn continued crawling into the space until his lamp revealed a decayed piece of wood.

He picked it up as if it were a precious stone, knowing that it could offer an important clue about the age of the manmade cave.

Meanwhile, in the meadow above, a group from the State Office of Historic Preservation in Munich had marked off the site with colored tape. Then they rolled a three-wheeled cart equipped with ground-penetrating radar across the grass. “The gallery has collapsed at the back,” one member of the group explains. “We’re figuring out its actual size.”

The exploration of the site is a pioneering activity, marking the first time an archeological agency in Germany is showing an interest in an extremely unusual ancient phenomenon. Similar small underground labyrinths have been found across Europe, from Hungary to Spain, but no one knows why they were built.

At least 700 of these chambers have been found in Bavaria alone, along with about 500 in Austria. In the local vernacular, they have fanciful names such as “Schrazelloch” (“goblin hole”) or “Alraunenhöhle” (“mandrake cave”). They were supposedly built by elves, and legend has it that gnomes lived inside. According to some sagas, they were parts of long escape tunnels from castles. 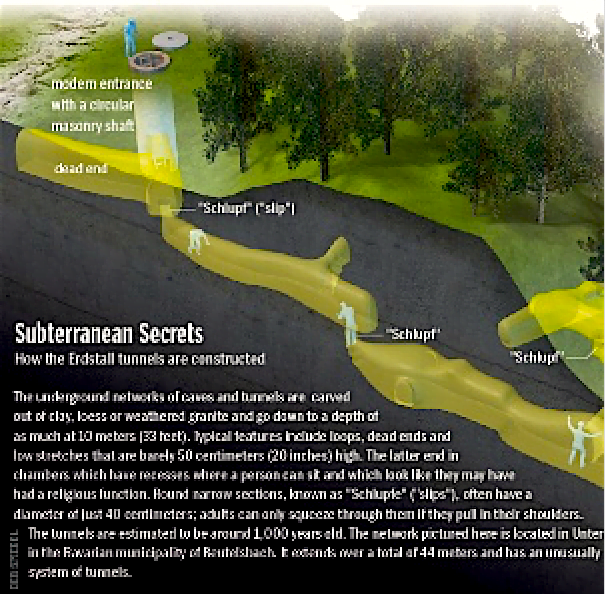 In reality, the tunnels are often only 20 to 50 meters long. The larger passageways are big enough so that people can walk through them in a hunched position, but some tunnels are so small that explorers have to get down on all fours. The tiniest passageways, known as “Schlupfe” (“slips”), are barely 40 centimeters (16 inches) in diameter.

The ground beneath the southern German state of Bavaria is literally perforated with these underground mazes — and no one knows why.

Many galleries are connected to the sites of former settlements. The tunnel entrances are sometimes located in the kitchens of old farmhouses, near churches and cemeteries or in the middle of a forest. The atmosphere inside is dark and oppressive, much as it would be inside an animal den.

For those curious to see what it’s like inside the tunnels, innkeeper Vinzenz Wösner offers tours, or “guided crawls,” in Münzkirchen, a town in northern Austria.

The tour begins in the taproom and proceeds down a stone stairway into the cider cellar, where there is a trap door that opens into a gaping hole. “We don’t let people with heart conditions do the tour,” Wösner says in his thick Austrian accent. He keeps a large sling on hand for emergencies, so that if anyone faints he can pull them out of the narrow tunnel.

The vaults could not have served a practical purpose, as dwellings or to store food, for example, if only because the tunnels are so inconveniently narrow in places. Besides, some fill up with water in the winter. Also, the lack of evidence of feces indicates that they were not used to house livestock.

There is not a single written record of the construction of an Erdstall dating from the medieval period. “The tunnels were completely hushed up,” says Ahlborn.

Archeologists have also been surprised to find that the tunnels are almost completely empty and appear to be swept clean, as if they were abodes for the spirits. One gallery contained an iron plowshare, while heavy millstones were found in three others. Virtually nothing else has turned up in the vaults.

Until recently, the secret caves were explored only by amateur archeologists. The pioneer of Erdstall exploration, Lambert Karner (1841 to 1909), was a priest. According to his records, he crawled through 400 vaults, lit only by flickering candlelight, with “strange winding passages” through which “one can often only force oneself like a worm.”

The tunnels later became the realm of local historians armed with vivid imaginations. They speculated that the caves were used as “winter quarters by the Teutonic tribes” or as dungeons for the disabled. Some of today’s more esoteric souls interpret them as “spaces of nonbeing.”

Now Ahlborn wants to finally apply the more precise tools of science to the vaults. Under his leadership, the Erdstall working group has developed into a serious and effective group of experts. It includes cave researchers, geography teachers and engineers like Nikolaus Arndt, who has built subways in India and pipelines for fossil groundwater through the Libyan deserts for Gadhafi.

At their annual meeting, the amateur explorers combine shoptalk with bold subterranean expeditions. To avoid suffocating, says one member of the group, they recently blew air into a tunnel with a “reversible vacuum cleaner.”

An exhibition in the Bavarian city of Passau now makes the subject of these mysterious galleries more accessible to a broader public. One of the hands-on exhibits is a tunnel made of plywood. Posters refer to the actual tunnels as “Central Europe’s last great mystery.”

The show is generating urgently needed attention. Road and construction crews often stumble upon subterranean galleries, and not knowing what they are, promptly fill them up with dirt.

The owner of the biggest complex in Germany, which is 125 meters long, built a swimming pool above it. Arndt calls it “a disgrace.” However, some 90 percent of the catacombs are still believed to be intact and undiscovered.

The story of Josef Wasmeier from Beutelsbach in Lower Bavaria shows how difficult it is to track them down. There was once a castle not far from his farmstead. It was torn down in the 18th century, and now there is a grove of locust trees on the site.

“According to the legend, there were escape tunnels emanating from the castle hill,” says Wasmeier. He and a few friends decided to search for the tunnels. They dug and drilled, day in and day out. “In the end, the only one still digging was Rudi Eichschmied — every evening, sometimes in the moonlight,” says Wasmeier.

The man finally came across an underground cavity.

It led to a unique gallery with walls made of sand. Initially the tunnel went down vertically for 4 meters, and then it continued in a zigzag pattern. There was a narrow “Schlupf” section at the end of the labyrinth. It reminds the researchers of a vagina.

Wasmeier once took a group of female healers down into his cave. The women slid headlong through the tunnel, in complete darkness, as if passing through a birth canal.The farmer sometimes feels a sense of reverence when he goes into his tunnel. “You feel like a Hopi Indian inside,” he says. “They too used to sit in caves in the hope of finding answers.”