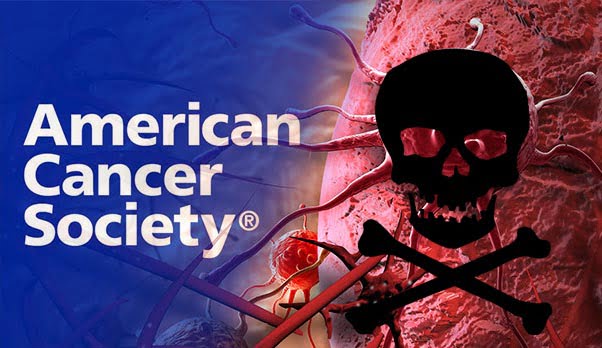 The Fraud of the American Cancer Society Exposed

Cancer drugs cost more than ever

Does your insurance cover the latest cancer drug that costs $159 to make, but sells for $106,000? The cost of cancer drugs has skyrocketed lately by more than 5000%, and this is not the exception, but the rule. Despite this gob-smacking display of greed, we continue to finance not only the pharmaceutical industry, but ‘charitable organizations’ that are nothing more than wolves in sheep’s clothing. [1]

The American Cancer Society (ACS) which has a cure rate of about 2.1%, receives more money in contributions every 10 minutes than the Independent Cancer Research Foundation (ICRF) receives in a whole year. ICRF arguably has cure rates closer to 90%.

Why do we continue to fund a fraud? Samuel S. Epstein, M.D., Professor Emeritus for Environmental and Occupational Medicine at the University of Illinois, School of Public Health, has a few ideas about why we give our money to thieves who are more interested in their next private jet or private island than saving lives. He’s written a 100-page paper on the disgusting habits of the ACS.

The Wealthiest ‘Non-Profit’ in the World

Granted, half of the cancer charities that AIP rates in a Charity Rating Guide receive a D or F grade and only 37% receive an A or B, but the ACS should fall off the scale. The ACS is the world’s wealthiest ‘nonprofit’ institution. THE WEALTHIEST. [2]

According to James Bennett, professor of economics at George Mason University and recognized authority on charitable organizations, the ACS held a fund balance of over $400 million with about $69 million of holdings in land, buildings, and equipment in 1988. Of that money, the ACS spent only $90 million— 26% of its budget— on medical research and programs. [3]

The rest covered “operating expenses,” including about 60% for generous salaries, pensions, executive benefits, and overhead. By 1989, the cash reserves of the ACS were worth more than $700 million. This does not account for the sharply-climbing prices of cancer and other drugs in the past two decades. [4]

Despite having more money than any other charitable organization, the ACS bears a major responsibility for losing the winnable war against cancer. Hundreds of alternative methods for treating cancer are ignored. That ‘non-profit’ title should be stripped from them.

Who Funds the ACS?

The ACS is in bed with just about every major player in the cancer-is-money-scheme. Their ties to Big Pharma, Big Ag, Big Biotech, and Big Food are all apparent in Dr. Epstein’s paper:

The ACS, along with the National Cancer Institute, almost exclusively focus on cancer research and the diagnosis and the chemical treatment of cancer. Preventive strategies, such as avoiding environmental toxins (found in products like cosmetics or cleaning products), changing one’s diet, and reducing exposure to pesticides receive virtually no consideration at all.

“Giant corporations, which profited handsomely while they polluted air, water, the workplace, and food with a wide range of carcinogens, remain greatly comforted by the silence of the ACS. This silence reflected a complex of mindsets fixated on diagnosis, treatment, and basic genetic research, together with ignorance, indifference, and even hostility to prevention. Not surprisingly, the incidence of cancer over past decades has escalated, approximately parallel to its increased funding.”

The next new cancer drug is just around the corner, and you can bet it won’t be cheap…or effective. After more than forty years mainstream medicine still offers less than a 3% cure rate over 5 years. Why? Well, the sad reality is that it’s too profitable for us to stay sick.

In 2014, there will be an estimated 1,665,540 new cancer cases diagnosed and 585,720 cancer deaths in the US. Approximately $6 billion of tax-payer funds are cycled through various federal agencies for cancer research, such as the National Cancer Institute (NCI). The NCI states that the medical costs of cancer care are $125 billion, with a projected 39% increase to $173 billion by 2020. The ACS is the ghost in the machine running this mayhem.

Ditch the ACS, and urge your company to stop donating to them. The wealthiest ‘charity’ on the planet doesn’t need another red cent from another cancer patient. Your health is priceless; don’t sell it to the corporate profiteers.