Prepare For Change
Home Event Support Groups Why Genetically Engineered Trees Harm The Planet and How We Can Stop... 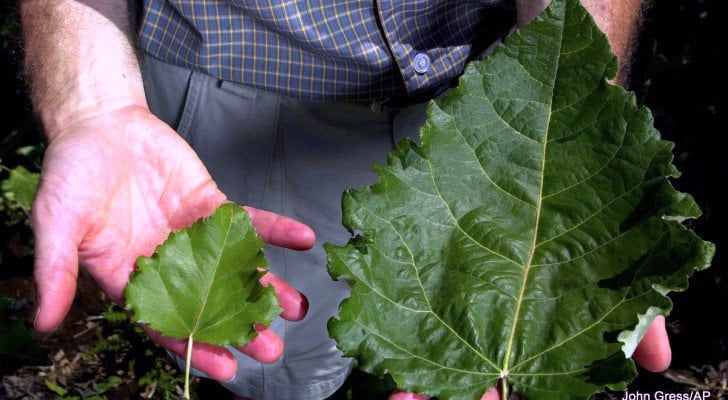 Genetic engineering involves high-tech methods to integrate genes straight into an organism. It’s a term that has caused an overwhelming amount of controversy and concern in the food industry because of their effect on our health and the environment. And while the battle to get back to the basics and live from the earth once again is ongoing, there seems to be a new threat to this ideology.

The biotech industry is trying to bulldoze down 184 million acres of native forests around the world and replace them with plantations of genetically engineered trees, which will be without other plants and wildlife, but stand merely on their own amidst dead soil atop groundwater reserves that are increasingly diminishing. They will be engineered to kill insects, adhere to a variety of weather conditions, grow at rapid rates, and withstand toxic chemicals. While they may, at first, seem like benefits, they are matched with some serious consequences, from damaging the environment to violating the rights of indigenous people and harming the health of people, flora, and fauna.

The Reason Behind GE Trees

Do biotech companies simply want to control everything? While that’s up for debate, their reasonings for this potential plan are disconcerting. Their short-term goal is to create these designer trees as a means for increasing their income-generating capacity. Not all trees — their commercial value, their harvest rate, and their characteristics — are created equal, and the industry is banking on that. Trees that grow quickly, such as the Eucalyptus, are being engineered to grow even quicker.

Trees are also being engineered to benefit the paper industry, as they will have lower lignin, a process that proves expensive, as it must be removed from the wood pulp prior to being made into paper. The downside of this is that lignin, a natural polymer, is responsible for the strength of trees, allowing them to withstand harsh weather conditions and diseases and damage from insects and animals. Furthermore, low-lignin trees decompose faster, which, in turn, causes an influx of carbon dioxide being released into the atmosphere. This will further add to the rapidly increasing concerns of climate change. And because GE trees are weaker, they require chemicals like herbicides and pesticides to keep them healthy. Low-lignin trees will also create an uprise in insect pest populations.

And GE trees are already proving their power to destroy the natural world. For instance, GE fruit trees in Hawaii have ruined the territory’s wild, organic papaya industry.

The Bad Science Behind Genetic Engineering

Unlike natural reproduction, which uses vertical gene transfer, where the offspring is created through sexual or asexual reproduction, genetic engineering uses horizontal gene transfer. The latter requires injecting a gene from one species into a totally different one. Because the two are foreign to one another, the results can only be unknown at first, with the mutations it causes unforeseeable. Because genes act in the context of their entire genome, it makes the process of genetic engineering utter mayhem, as changing the genome causes nature to act erratically; the outcome unpredictable. In short, genetic engineering is merely a hypothesis.

Unlike GE crops such as corn, trees’ lifespan can cover decades and centuries, so if GE trees make their way out of their plantations, they can be hard to destroy. This can cause native trees to suffer, as, for instance, tree species such as pines, which have the ability to cover large areas with their pollen and seeds, can cause these native trees to be covered in GE pollen. It’s a disruption of forest ecosystems that consequently affects everything else, since these native forests aid in the production of food and wildlife habitats, absorb carbon dioxide and produce oxygen, and filter water. The contamination of native forests by GE trees will ensure that, eventually, no nativity is left. And what about the plants, animals, and insects that inhabit these forests? How will they be affected? Imagine a wild fire that cannot be tamed. The results are devastating; what’s left is nothing. Only time will tell how this GE pollen will take to the native world, from the forest to human existence.

Genetically engineered trees are being opposed by people around the world who understand the devastation this unnatural operation created by multi-billion dollar timber and biotechnology corporations has on our world.

A global network made up of people of all walks of life is standing up in opposition of GE trees. The Campaign to STOP GE Trees is made up of 200 organizations spanning 49 countries.

Becoming educated on the matter may push you to do more than just sit idle in despair. For instance, you can do things to preserve our native forests, like buying recycled products, cutting out unnecessary paper products like napkins, cut back on printing and so much more. Additionally, you can visit the campaign’s website and sign the petition to the USDA to stop the plantations from harming our planet and the many precious things that make it up.