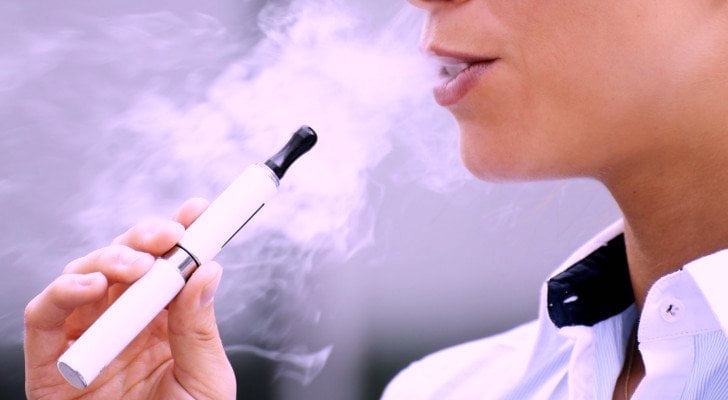 According to a new study out of Hong Kong, China, the chemicals most commonly included in e-cigarettes contain more cancer-causing substances than polluted air. The researchers also discovered that a type of flame retardant used in the devices themselves can affect the body’s reproductive system, which could also lead to cancer.

The study analyzed thirteen different electronic cigarettes that were sold on the Chinese market, and found that the level of polycyclic aromatic hydrocarbons (PAHs), which is a by-product of burning petroleum, ranged from 2.9 to 504.5 nanograms per milliliter.

According to Dr. Chung Shan-shan, an assistant professor in the Baptist University’s Biology Department:

“[Level of PAHs] in e-cigarettes is at least one million times more than roadside air in Hong Kong. . . . Even though we don’t know the exact number of e-cigarettes one should take, not to mention that many of the carcinogenic effects are cumulative, I don’t think there is a safe margin. (source)

This story broke when the South China Morning Post reported it last week, and now the Honk Kong Council on Smoking and Health, which commissioned the study, is calling for a ban on e-cigarettes as soon as possible. They wouldn’t be the first country to do so, as more than a dozen countries have already made a similar move.

The study, however, has not come without criticism.

According to Dr Konstantino’s, a researcher at Onassis Cardiac Surgery Greece, Department of Pharmacology, at the University of Patras:

The story says that e-cigarettes are “a million times” more harmful than outdoor air. I was intrigued to see what kind of a story that was, and once again I was shocked. Not only it is another story far distanced from the truth but, if the statement of an assistant professor of biology is accurately reported, it is a complete disgrace for the scientist, the department and the university. . . .

There are only two possibilities: either the scientists have no idea about what they are talking about, or they are deliberately misinforming the public and the regulators. Even worse, they are creating panic to vapers (the vast majority of whom are former smokers), with the risk of making them relapse to smoking. This is a typical case of gross misinformation and extremely poor science. Literally, a public health disgrace… The reporters of this “study” (not authors, because there is no published study) need to immediately apologize to the public for creating this story out of nothing.

You can read more of what he had to say HERE.

A recent study published by researchers at the University of California’s San Diego School of Medicine and Veterans Affairs reported results which suggest that e-cigarettes are “toxic to human airway cells, suppress immune defences and alter inflammation, while at the same time boosting boosting bacterial virulence.”

“This study shows that e-cigarette vapor is not benign – at high doses it can directly kill lung cells, which is frightening. We already knew that inhaling heated chemicals, including the e-liquid ingredients nicotine and propylene glycol, couldn’t possibly be good for you. This work confirms that inhalation of e-cigarette vapor daily leads to changes in the inflammatory milieu inside the airways.”  – Senior author Laura E. Crotty Alexander, MD (source)

The key messages from their study, which was published a couple of days ago in the Journal of Molecular Medicine, are the following:

These findings were actually reported a couple of years ago, but now, the same results have proven true with mice.

“Inflammatory markers — signs of full-body inflammation — in the airways and blood of mice that inhaled e-cigarette vapors for one hour a day, five days a week, for four weeks were elevated by 10 percent compared to unexposed mice. . . . Some of the changes we have found in mice are also found in the airways and blood of conventional cigarette smokers, while others are found in humans with cancer or inflammatory lung diseases.” (source)

The researchers did mention that although they cannot provide a link to a specific disease, reports of acute toxicities discovered in the lab are enough to have them believing that e-cigarettes “will cause disease in the end.” The study also shows how, when exposed to bacteria, e-cigarette vapor was more harmful in a mouse model of pneumonia.

Last month, Harvard University published a study linking e-cigarettes to lung disease (you can read their press release here). Apparently, in developers’ efforts to remove the combustion element of smoking, they neglected to consider the other potential health hazards posed by the use of this device (or, at the very least, those concerns were heavily overshadowed). Researchers have discovered that the danger lies in the chemical flavourings used in e-cigarettes – more specifically, Diacetyl, a flavorings chemical that the university maintains can lead to severe respiratory disease. The chemical is found in more than 75 percent of flavoured electronic cigarettes, alongside two other related and potentially harmful compounds used to produce flavours that appeal to a variety of young people, such as cotton candy.

Are They Still A Better Option Than Smoking? Does A ‘Healthy’ Alternative To Smoking Even Exist?

According to Armando Peruga, Programme Manager of the World Health Organisations (WHO) Tobacco Free Initiative:

Some research programmes are already under way but given that e-cigarettes have been popular in the last four or five years, research has barely started and it’s early days yet. It would take about five or 10 years before we have evidence that could change the current picture. (source)

We contacted the lead author about this study, and she offered these comments:

My personal bias is that I want to make sure that vaping e-cigarettes is safe for my patients, and if it isn’t, to be able to counsel them appropriately about risks and benefits of smoking cigarettes vs. vaping e-cigarettes. I truly hope that e-cigarettes are significantly safer than cigarettes!  And so far, it looks like that could be possible.

It is difficult to say whether they are a better option or if they do actually help people quit smoking. The truth is, both could be dangerous, and perhaps e-cigarettes are a better alternative. But perhaps it’s really just choosing between the worst of two evils. Even if e-cigarettes are a safer alternative, there is nothing wrong with outlining the risks of their use. Furthermore, I do know that there are other, natural methods that can be used to quit smoking.

Greenmedinfo.com is a great place to start your research, and it’s worth the effort – while many things can be conquered with the application of a little willpower, sometimes kicking substances that your brain craves requires more than just willpower, and a little asistance. You can check out this article below for starters; I hope it helps if you are trying to quit:

To see what happens to your body when you quit smoking click HERE.

Determining the underlying emotional problems that lead to addiction is also crucial to recovery. Beyond just the commonly citied biological factors, research suggests that our environment, or our perception of our environment, leads us to these habits. THIS article that we recently published explores this idea in-depth.