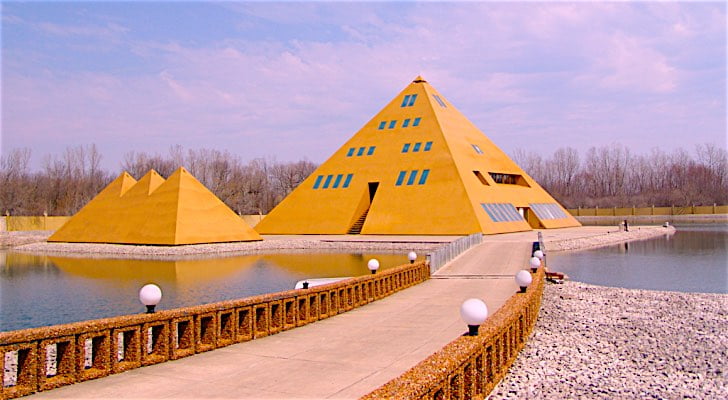 In a world now filled with outlandish and unconventional architecture, the idea of someone building a gold pyramid certainly doesn’t seem newsworthy, but the story of this Illinois man is simply remarkable.

One day after stumbling across a university study suggesting that the pyramids at Giza generate energy, Jim Onan decided to test the theory by building a number of small pyramids to put around his house. Once completed, Jim and several others were astonished by the “weird sensations” putting their hands above the structures seemed to elicit. The top of the pyramids appeared to be emitting some kind of energy.

Wanting to take this oddity to another level, Jim decided to build a 13 foot tall pyramid in his backyard, in which one of his sons, a botanist, suggested that they grow plants within. They soon discovered that plants sown within the pyramid grew, on average, 3 times as quickly as those without.

Now completely enveloped by his experiment, Jim, after a lighthearted conversation with his wife, decided to build his family an entire house in the shape of a pyramid. The final product was designed to exactly replicate the pyramids at Giza (at 1/9th of their size, of course).

As the building neared completion, the next astonishing thing took place: the middle of the floor within the structure began to bubble up with spring water. This obstacle forced the family to scrap their plans for a ground level pool and to instead bring in experts to help reroute the newfound water away from the house.

Many believe, however, that it was the pyramid design itself that created the unexpected water situation, since prior to that there was believed to be no risk of such an occurrence.

Taking his newfound passion to another level, Jim elected to put an additional $1 million into the house to coat it with 24-karat gold. It was at this point that the already noteworthy structure began to attract substantial public attention from the media and locals. Even celebrities at the time got involved, as Michael Jackson apparently showed interest in shooting a music video within the structure, and Muhammad Ali offered to buy it in hopes of using it as a training facility.

Adding even more intrigue to this mysterious building is a claim made by one of the workers on site, who maintains that, because he regularly drank the spring water it produced, his blood pressure lowered significantly. Jim apparently thought that he was crazy and invited others to drink from the spring for free, many of whom remarkably came back shortly after with several different ailments healed. Could some or all of this, if true, be attributed to the placebo effect? Absolutely, but it’s still interesting to note.

Since originally being built in the 1980s, the gold pyramid home has become an American landmark, and was even featured on an episode of the series Home Made, which you can view for free here: