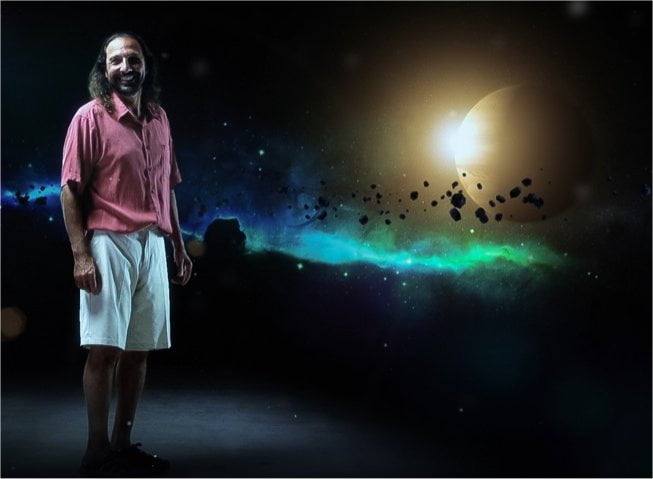 Physicist Nassim Haramein is a pioneer in quantum mechanics, unified field theory and energy research. He has dedicated his life to the investigation and the deep study of physics, sacred geometry, chemistry, biology, archeology and mathematics. Nassim leads the Resonance Project and directs and leads a team of physicists, electrical engineers, mathematicians and scientists with the purpose of exploring and advancing developments in quantum energy, life science and consciousness. Nassim currently resides in Encinitas California. This interview was conducted at the Los Angeles Hilton at the Conscious Life Expo in February 2016.

Question: You explain the brain as a receiver of different vibrational frequencies. Where do you think the signal originates?

Nassim: From a field of information that is present at the quantum level. This is on a very fine scale. Way below the atomic structure there is a field called the Planck Field, or the Planck oscillators. They are very small. Protons are already really small. So you are made out of a hundred trillion cells. There are a hundred trillion atoms approximately per cell. Atoms are really small. Imagine that protons are like a head of a pin on the dome of the Vatican. Then the dome is like the electron cloud of an atom. So a proton is really small. And realize that the Planck grains are making up the structure of space. So if the Planck would be the size of a grain of sand, then the proton would be a diameter from here to Alpha-Centari… which is about 40 trillion kilometers away. So the Planck is way teeny. It is the smallest proton of light, the smallest electromagnetic field that can exist. It is the portal of the fabric of space. And think the portal as a portal of information of all things being present in this field. Just like the electromagnetic waves carry information, that you can put up a radio set, tune the crystals to the right frequency and all of a sudden you can hear the music come out. It’s the same thing. The band that is making the music is not in the radio. The brain and nervous system is tapping into this field of information, which is a result of all other things radiating into it. So there is an exchange of information between everything and you that is occurring.

Question: Would you call this field the Collective Consciousness or the Akashic Record?

Nassim: Yes, you could call it that. Like if you wanted to use ancient civilization description. Many of them describe this field. They call is Prana or Chi. All sorts of different names.

Question: How do you think all the enlightened pre-technology ancient cultures discovered the same exact system of sacred geometry and Universal design? Do you think they were given this information by external sources such as extra-terrestrials? Or is the coded in our DNA? Or perhaps they learned how to tune into that knowledge through altered states of consciousness.

Nassim: I think it is all three of those. You find this across all the different cultures. If you put them together, they describe something very significant. The structure of space, the spin of space, and all this stuff like yin-yang. Basically it is describing this unified field. And if you look at their cultures describing these things, none of them say we came up with this. They all say we got this from the Sun God, or something that came from a star system in floating boats. Light beings. But at the same time, since we are made out of this stuff, it would naturally arise within us as well. So they recognized as something very fundamental. Very important… that is why they propagated it throughout the ages. So it will reach us. Right? And at the same time. Most likely, people had altered states of consciousness at time. And there are so many reports of those altered states of consciousness, by taking certain plants, medicinal compounds, and so forth. Seeing the geometry, seeing the dynamics, you know and so on. I think it is all about consciousness.

Question: So what do you think is happening at a neurobiological level?

Question: You mention the black hole. Is it the electron that is going in and out?

Nassim: It is the photons. The electron is the charge that the black hole is producing. The proton is the black hole and the charge it produces is the electron. We actually just found last week a solution for the electron that is extremely exact. Like 99.9999997% exact and it is remarkable. And it is based on the exact same solution of the proton. And it predicts the …electron cloud. So now I have got the whole thing. I am really excited about this. So the information is the Planck field, the Planck photons, are the smallest units. Each bit of information is going through that cycle.

Question: Is it that it is the same exact structure that goes in that is also coming out? Or is the photon going somewhere else in the Universe?

Nassim: The bit that crosses the event horizon can be anywhere in the universe. All the volumes are shared through the wormhole structures. Just like a neural network. All of a sudden, the information becomes available for everyone else. It might come out at the same place, or somewhere else in the Universe. It doesn’t matter, because when it comes back out, it is changed like the rest of them. It experienced the outside. And it is changed by the outside. Then it goes back in and it’s changed by the entire Universe. It is a constant evolution.

Question: So in the atomic model, the center is a black hole. My first question has to do with the proton. In essence… is the proton the center of the black hole?

Nassim: The proton is the black hole.

Question: So, what if there is more than one proton? Such as oxygen with 16 protons.

Nassim: So then there are 16 black holes, orbiting each other. This is why if you get too many of them in there, they become unstable. They start radiating and now you have nuclei decay. The protons themselves don’t decay, at all. We have never seen a proton decay, ever in 13.7 billion years. There has been no proton decay, so that is pretty good!

Question: What do you think prevents one proton’s black hole sucking in the other proton‘s black hole? The energy is so strong. What is the force that stabilizes the protons from swallowing one another?

Nassim: Try centripetal force. Geo-scopic effects. Remember, they are spinning. And they are spinning fast. So those centripetal forces, and the Coriolis effect, such a strong angular momentum, will keep everything in orbit. Unless it’s got the wrong number and it doesn’t want it. Then radiation will happen until it finds the right relationship. So that is why heavy nucleons start to radiate radioactive energy. And emit electromagnetic wavelengths. The same thing in the solar system and Universe.

Question: If you look at the atomic model, and the galaxy, with a black hole in the center of each system… is there another scale up?

Question: So that also exists on another whole level and scale?

Nassim: Exactly. That is correct. There are black holes all the way up and all the way down. Absolutely. That is what I have found. The Planck obeys the condition of a black hole too. The little Planck is a teeny black hole. If you take the mass of our Universe and you put it in the radius of the Universe we see today, it obeys the exact condition of a black hole. It is not a coincidence. They call it a coincidence in standard physics, but it’s not.

Question: So is there an ultimate coincidence that all of this stuff happened on accident? Was it just random? Or was it designed? It’s so intricate that it seems it was designed by something.

Nassim: Well, you are going back to wanting a beginning and an end. And I don’t think that actually exists. All we have seen in the Universe at any time is just change of state. I have not seen anything end, or begin. We just have a change of state. Actually today there are articles that came out from studies that are being done in quantum physics where they describe the space as a fluid of Planck’s. They solved some of the equations now showing there was no Big Bang… there was no beginning! It has always been there. You know, it is an infinite continuous feedback of information. It is hard for us, because we think, “we were born and then we die”, and that’s why we have this idea of there being a beginning and an end. That might not be a universal concept. That is just a human concept. The beginning of your life, and the end of our life, doesn’t show anything new happening… just a change of state. Meaning, like when you die, all the atoms you are made of are just recycled. Just goes to another state.

Question: And so do you believe in reincarnation?

Nassim: Absolutely. Yes, I see no reason why information would be lost. Physics says no information can be lost. So, I don’t see why the information of who you are, that is in Plank field, would go anywhere. It would probably seek another residence. A condition it can regain a body to continue to explore. So, yes, I have no problem with reincarnation and concept of Akashic Record. And so on. Basically it is the physics of the Universe….