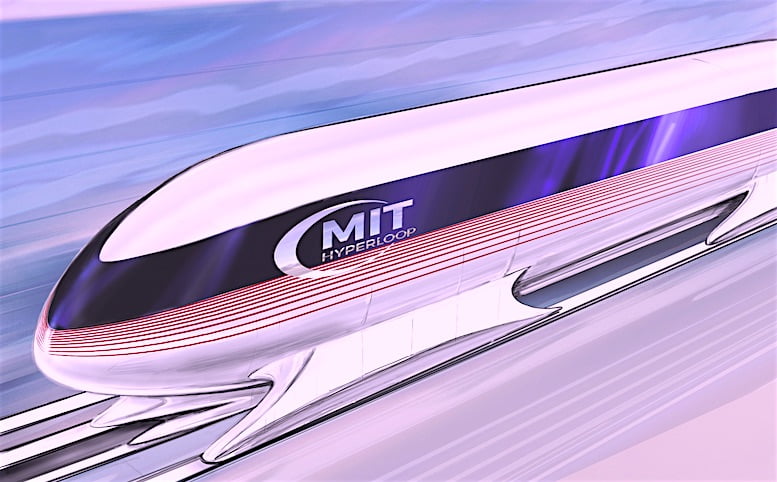 Young engineers from MIT beat out 1,000 competitors to design the transport vehicle of the future. The students won a competition to transform SpaceX and Tesla Motors co-founder Elon Musk’s idea into an actual design for a Hyperloop to move pods of people at a very high rate of speed.

The Boston-based Massachusetts Institute of Technology was named the winner yesterday after a competition of more than 1,000 college students at Texas A&M university.

The best teams will build their pods and test them at the world’s first Hyperloop test track in Hawthorne, California.

Musk says that the pods are designed to run between large cities that are several hundred miles apart, such as San Francisco and Los Angeles.

According to Musk, it won’t be the last Hyperloop competition. The SpaceX executive promised to host more competitions for the Hyperloop in future years. He also said that he was extremely impressed by the enthusiasm generated from this weekend’s event at Texas A&M.

“I really like the idea that you could live in one city, work in another city, and move fast enough that you could actually do that,” he said. “It would free people up.”

The design, created by MIT students and staff, was announced as the winner of the SpaceX competition at Texas A&M University over the weekend.

The prototype will now be trialled on a mile-long test track alongside the headquarters of Musk’s SpaceX rocket company in Hawthorne, California. Testing is due to start in April.

The competition was devised to push forward open-source development of the Hyperloop concept, which Musk unveiled in 2013. Musk has described the concept as “a fifth mode [of transport] after planes, trains, cars and boats.”

Intended as a low-cost way to speed passengers between Los Angeles and San Francisco in a fraction of the time taken by other modes of transport, Hyperloop consists of driverless capsules travelling in low-pressure tubes mounted just above the ground.

The low pressure would reduce air resistance, meaning capsules propelled by linear induction motors could speed through the tubes at speeds of up to 760 miles (1,220 kilometres) per hour. Friction would be reduced by floating the capsules on a cushion of air or by using magnetic levitation.

MIT’s winning solution involves levitating the pod above the track with powerful on-board magnets. Propulsion would come from induction motors built into the track itself.

Weighing only 250 kilograms, the experimental pod can travel up to 246 miles per hour, although the design does not account for passengers or cargo.

“We use magnet levitation and our pod doesn’t have any onboard propulsion,” an MIT spokesperson told Dezeen. “We will be accelerated by a SpaceX launch device, casually referred to as ‘the pusher’.”

The spokesperson added: “The pod should be capable of traveling much faster, but it is limited by the length of the SpaceX test track and the force of the pusher at the beginning.”

The MIT team — which comprises students and faculty from the fields of aeronautics, mechanical engineering, electrical engineering and business management — aimed to demonstrate three key technologies with its design: high-speed and low-drag levitation, robust lateral control, and fail-safe emergency braking.

To keep weight to a minimum the pod has an aluminium frame and a tubular shell made of woven carbon fibre and polycarbonate sheets and measures 2.5 meters in length and one metre in diameter.

“The beauty of the system we designed is that it’s completely passive, an elegant property that will make our pod very scalable,” said team captain Philippe Kirschen, a master’s student in aeronautics and astronautics.

The pod’s passive magnetic levitation system is composed of two arrays of 20 neodymium magnets – a type of rare-earth magnet that is made from an alloy of neodymium, iron and boron. Developed by General Motors and Sumitomo Special Metals in the 1980s, it is reportedly the strongest type of permanent magnet commercially available.

“After liftoff, the pod will maintain a 15-millimetre levitation gap height at cruising speed and a peak lift-to-drag ratio of 14,” said the team.

To keep the pod centred on the track, the team has devised a lateral control system that uses passive magnets and active electromagnetic damping, which reduce oscillations.

By lifting the pod off the ground, vibrations are reduced and the pod is able to better traverse variations in the track, according to the team. “The system will also retract the pod’s skis to reduce magnetic drag during low speed operation,” the team added.

The driverless pod will feature a modular electronics system that enables autonomous flight control and braking. “Thorough instrumentation and robust state estimation will ensure the pod performs safely during flight,” the designers said.

The team has incorporated a mechanically fail-safe braking system, meaning if the motors or computers fail, the pod will stop on its own.

The braking system can decelerate the pod at 2.4G, which was the maximum allowed under the competition’s rules. One G is equal to 9.8 metres per second. From top speed, the brakes dissipate 1.5 megajoules (MJ) of kinetic energy.

“In case of emergency, the pod will be capable of driving itself forwards or backwards at one metre per second (m/s) using the pod’s low-speed drive wheels,” the team said.

Work on a Hyperloop test track began last November in Quay Valley, a proposed solar-powered city in Kings County, California. The area is home to the headquarters for SpaceX, or Space Exploration Technologies Corporation, which Musk founded in 2002.

“MIT has been involved in so many technological breakthroughs in the past century,” said Kirschen. “It just makes sense we would help advance what might be the future of transportation.”

Musk first proposed Hyperloop as a supersonic transport system to link Los Angeles and San Francisco in just 30 minutes. The billionaire, who also owns electric car company Tesla, believes the network could be built within a decade.

Other recent developments in transport innovation include the US government’s $4 billion plan to roll out self-driving cars and the unveiling of the world’s first passenger-carrying drone.