Prepare For Change
Home Disclosure The Occult Meanings of Represent: Why You Can Not Represent Yourself in... 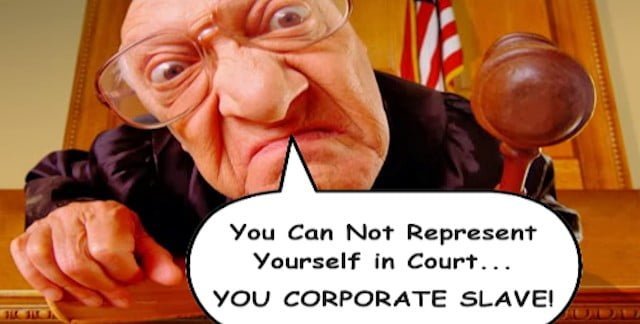 To know why you can not “represent” yourself in court, you need to study the definitions of the word represent and find its deeper meanings. You also need to ask yourself this question: “How could I represent myself when I am already myself living in a body made of flesh and blood?” One of the common definitions of the word represent is “to act or speak officially for (someone or something)”. Based on this definition, when you represent someone or something, you are acting or speaking for it.

Here are other common definitions of the word represent from Dictionary.com:

Here is the definition of the word represent from Black’s Law Dictionary (5th edition):

To appear in the character of; personate; to exhibit; to expose before the eyes. To represent a thing is to produce it publicly. To represent a person is to stand in his place; to speak or act with authority on behalf of such person; to supply his place; to act as his substitute or agent.

The Occult Meanings of the Word Represent

One of the origins of the word appear is the Latin word apparere, which is derived from the Latin words ad(“to”) and parere (“to come forth, be visible”). The word appear has a strong connection to magic (magick), which is why it is used a lot by fake or real magicians. These magicians like to make things appear (be visible) and disappear (be invisible) right in front of your eyes.

Like magicians, judges also like to make things appear and disappear. This is why the letter that they used to notify you to appear in court is called a summons. To summon you to court is to call you to appear in court using the power of words and magic, similar to how witches summon spirits to appear in front of them. The word summons is defined as “A form of legal process that commands the defendant to appearbefore the court on a specific day and to answer the complaint made by the plaintiff.”

In my article titled The Magic Power of Words and Why Words Rule the World, I said that judges are magicians, which is why they are sometimes called magistrates. Here is an excerpt from that article:

In legal terms, the word magistrate is defined as “any individual who has the power of a public civil officer or inferior judicial officer, such as a Justice of the Peace”. Magistrate can also be defined as “a civil officer charged with the administration of the law”. To find the occult definition of the word magistrate, you need to split it into two words (magi-strate). The word you need to pay attention to ismagi. One of the origins of the word magi is the Latin word magi (plural of magus), meaning “magician, learned magician”. Hence, the words magistrate, magician, magic, and magistery.

Phonetically, the word character sounds similar to “care-actor”. The word care is derived from the Old English words caru and cearu, meaning “sorrow, anxiety, grief,” also “burdens of mind; serious mental attention”. Based on these occult definitions, a character/care-actor is an actor with serious mental problems. A character is a symbol and therefore it is not you, the man (male or female) with a body made of flesh and blood.

Because a character is a symbol, it is an artificial person and therefore it needs your life force energy tocharge it with life. This is why the legal system has to charge you first before summoning you to appear in court. They charge you first because they are planning to trick you to give up your life force energy, so that it can be used to charge the character/legal person/dead person and give it life.

Why You Can Not Represent Yourself in Court

When you are in a courtroom and the judge asks you if you are representing yourself, what he is really doing is tricking you to agree to represent your legal person (character), which is an artificial person, also known as a corporation. This artificial person is sometimes referred to as the legal name, which is asymbol or character used by the legal system to identify you and mark you with the “mark of the beast”. Do you remember what I said earlier that the word character originated from the Latin word character and the Greek word kharakter, meaning “engraved mark,” also “symbol or imprint on the soul”?

When you split the word represent into two words it becomes re-present. The prefix re comes from the Latin word re, meaning “again, back, anew, against“. How could you “represent” yourself more than once during the exact time in court? Furthermore, why would you want to “represent” yourself but during the same time be against (re) yourself?

The word present is defined as “being, existing, or occurring at this time or now; current”. But be aware that one of the earliest definitions of the word present is “thing offered, what is offered or given as a gift”. Based on these two definitions, when you present yourself in court, you are presenting yourself in the present time or presenting yourself as a gift. Because of this, you need to let the judge know that you are in court to present yourself during that present moment in time and not as a gift.

Because you now know the occult meanings of the word represent, whenever a judge ask you if you are representing yourself in court, you should tell him that you can not represent yourself because you are already yourself and a living man or woman.

The legal system is full of words that have many different meanings, and therefore it is nearly impossible to know what the judge really means when he speaks. For example, when a judge says “person”, he could be talking about a natural person, artificial person, corporation, or anything that is artificial. Because of this, it is best to stay out of court whenever possible.