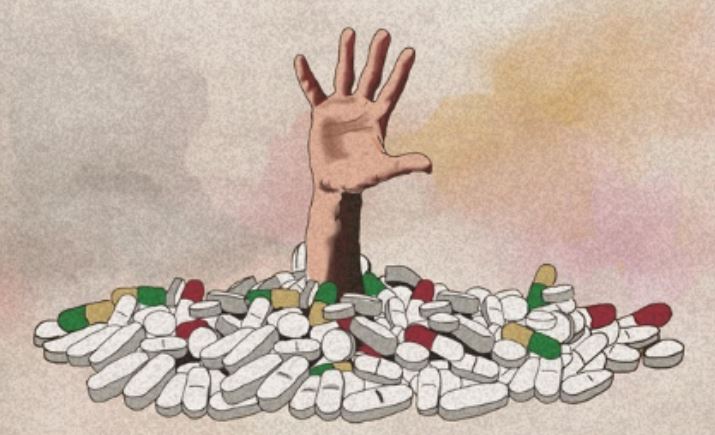 Considering the potential for having serious side effects and their addictive nature this makes opioid painkillers the most dangerous drugs known. Around 70% of accidental deaths caused by prescription drugs have been attributed to painkillers:  Over the last 10 years, female overdose deaths through opioids have increased by 450%.

-Misleading doctors and patients through underplaying the addictive nature of opioids

For example, the opioid painkiller drug OxyContin made by Purdue Pharmaceuticals is more addictive than heroin. It is in fact a very similar molecule to heroin.

After a number of hours when OxyContin no longer takes effect, consistent withaddiction, withdrawal symptoms start to kick in (aching, queasiness and anxieties). Then there are the returning symptomatic illness pains…

No findings exist to support this.

Purdue also claimed that OxyContin could be used to treat certain ailments where this drug would not normally be prescribed, such as for the treatment of back pain.

-More false claims over the drugs.

OxyContin has made huge sales through misleading claims: Purdue claimed that it gave twice as many hours of pain relief compared to other drugs when this was not the case. Nor, as claimed, did it give continual pain relief.

With accusations of deceptive marketing related to the above, attempting to hold the pharmaceutical companies responsible for the growing mass opioid addiction, a number of states have filed lawsuits.

For example, a legal team in the state of New Hampshire have an ongoing lawsuit against Purdue over OxyContin. However, as with other opioid drug manufacturers, armed with an overwhelming number of crack lawyers, the pharmaceutical giant has not been sued.

Oxycontin has made Purdue some 30 plus billion dollars over the last 10 years. Several of the company’s execs had been criminally charged and admitted deceiving regulators by misrepresenting the drug’s efficacy while covering up the addiction and risks. Although the company had paid out a 34.5 million dollar fine profits still flourished.

Scathing exposé: Drug manufacturer knew about OxyContin and its use as an illegal street drug but turned a blind eye

OxyContin has also been used as an illegal street drug. According to an article published in the Los Angeles Times it was revealed in spite of the fact that Purdue execs had full knowledge of OxyContin being pushed through criminal pill mills and drug rings they did nothing about it. They did nothing to report these crimes while having full knowledge of certain pharmacies and other specific connections supplying the drug dealers.

To make matters frustratingly worse, all Big Government has done in effect is to feed the Big Pharma corporate greed machine while the misery, suffering and death continues to rise: Big Government has responded to the rising addiction rates by introducing the Senate-approved Addiction and Recovery Act to deal with addiction. A step in the right direction but this doesn’t get to the root-cause of the problem.

It does nothing to hold the drug manufacturers responsible or punishable for promoting addiction through falsely marketing their drugs. Nor has it introduced tighter more vigilant controls on supplying and distribution to reduce the street drug crime. Further, it involves the introduction of anti-addiction drugs which means more money for the pharmaceutical companies who caused the addiction problem to begin with!

In light of the above, holding the pharmaceutical companies more legally, financially and ethically accountable, demanding truthful marketing and introducing tighter controls on drug suppliers to reduce the related street crime would indeed serve as effective solutions to the rising addiction.

Medical marijuana can be used to lower drug dependency, abuse and relieve pain. However, the fact that medical marijuana has many health benefits but in a number of places is a controlled substance (Schedule 1), putting it in the same illegal drug bracket as heroin, Ecstasy or LSD, beggars belief to some. But not those who understand the hidden ulterior motive:

-The fact that medical marijuana reduces the need for drug prescriptions is the reason why the pharmaceutical establishment don’t want the wide ban lifted: It is perceived as a threat to undercutting their business. Then there would also be less revenue money for Big Government…

Although becoming decriminalized in some states, such as the recentdecriminalization of possession in Illinois, if the ban on marijuana was lifted universally then it could reach out to the nation as a great healer. It can be used synergistically with other treatment.

There are useful US contacts like the Substance Abuse Mental Health Service Administration, on 1-800-622-HELP available 24/7… I’m sure there are similar setups in other countries.

It is hoped that this article has encouraged inquiry to not only fight painkiller addiction but also avoid it.

This Article First Appeared On: http://www.naturalblaze.com/