Bicarbonate is an essential nutrient and our stomachs, pancreas and kidneys often have to struggle to produce enough – especially as we get older.

Good question would be,

Is it a good idea for cancer patients to help these essential organs?

Older people do have bicarbonate deficiencies and the perfect thing medically speaking to do is to alleviate these deficiencies.

For cancer patients it could make the difference between life and death because cancer patients are universally very acid so the alkalinity provided by bicarbonate is crucial.

Recently the BBC published a scathing attack on Dr. Robert Young one of the leading proponents of the pH diet. He was being crucified for his treatment of cancer with intravenous sodium bicarbonateand charging a fortune, in California, to do so.

He was following the lead of Dr. Tullio Simoncini from Rome who is has been persecuted for his cancer treatments and especially for defining cancer as a fungus.

Utilizing sodium bicarbonate when dealing with cancer does not depend on the Simoncini theory that cancer is a fungus but it sure helps to understand how fungus infections are commonly involved with cancer. Certainly cancer cells act like fungal or yeast cells; they both rely on fermentation to gain their energy.

Through the years, in my discussions with other doctors who have tried Dr. Siimoncini’s intravenous treatments, few have reported success. One of the main reasons for this failure, I believe, is because the pH of the blood is tightly controlled. Adding alkalinity directly into the blood has great limitations because of this tight control.

This limitation is bypassed if we use oral and transdermal (baths) as a way of application because we can increase the alkalinity of all the body’s fluids and maintain them at high levels around the clock for weeks on end.

Another important reason for such failure is that it is a mistake (a big one) to rely only on bicarbonate (or any other substance including chemotherapy and radiation) to cure cancer.

Vernon Johnson, who cured himself of prostate and bone cancer in thirty days with bicarbonate also, for example, did conscious breathing for four hours a day.

With the Breathslim in my Natural Allopathic protocol one does not have to spend so much time to slow one’s breathing down. Just so happens that slow breathing increases CO2 levels and so does taking bicarbonate so one therapy reinforces the other.

I have seen Simoncini using sodium bicarbonate irrigation during the surgical removal of a large tumor to great effect and I believe Dr. Simoncini knows his business and way around intravenous medicine.

Sodium bicarbonate can be used during surgery, can be administered via IVs and catheters, taken orally, applied transdermally and put in large quantities into one’s baths.

It can also be nebulized directly into the lungs, which is wonderful especially when combined with glutathione.

My name is Annmarie and I’d like to thank you for your research and for making it available to us.

My children were able to enjoy another summer with their Grandfather, 74, who had been diagnosed with 4th stage kidney cancer last November, and we give glory to the Lord for helping us to find your Sodium Bicarbonate book, which we believe helped save his life.

My father-in-law was declared cancer free this past May! We spent two weeks with him in northern WI boating and fishing and just enjoying spending time with him.

I thought I would share this good news with you!

The kidneys are usually the first organs to show chemical damage upon uranium exposure.

Old military manuals suggest doses or infusions of sodium bicarbonate to help alkalinize the urine if this happens. This makes the uranyl ion less kidney-toxic and promotes excretion of the uranium-carbonate complex.

The oral administration of sodium bicarbonate diminishes the severity of the changes produced by uranium in the kidneys.

In addition British scientists at the Royal London Hospital shows that sodium bicarbonate can dramatically slow the progress of chronic kidney disease.

“Studies conducted at the University of Bari in Italy clearly demonstrated that a hallmark of all tumors, regardless of their origin or background, is their acidic environment.

In fact, tumor progression increased with an acidic pH and hypoxia, or a low oxygen level,” writes Dr. Veronique Desaulniers.

They showed that oral sodium bicarbonate increased the pH of tumors and also reduced the formation of spontaneous metastases in mice with breast cancer.

It also reduced the rate of lymph node involvement.

“The results of a study suggest that tumor cells do, indeed, perform niche engineering by creating an acidic environment that is non-toxic to the malignant cells but, through its negative effects on normal cells and tissue, promotes local invasion.”

Tumor invasion did not occur into regions with normal or near-normal pH.

Immuno-histochemical analyses revealed that cells in the invasive edges expressed the glucose transporter GLUT-1 and the sodium-hydrogen exchanger NHE-1, both of which were associated with peritumoral acidosis.

In support of the functional importance of our findings, oral administration of sodium bicarbonate was sufficient to increase peritumoral pH and inhibit tumor growth and local invasion in a preclinical model, supporting the acid-mediated invasion hypothesis.

Many diseases can be prevented or treated by managing the delicate pH balance of the fluids of the body because all physiological processes are sensitive to changes in pH.

Doctors and patients alike should know that pH is also a factor with oxygen utilization as well as cell energy so the importance of being.

Sodium bicarbonate (baking soda) is the least expensive, safest and perhaps most effective cancer medicine there is. Few understand how deep the rabbit hole goes with bicarbonate but a good starting point to realize is that it is a different form of CO2.

CO2, in the form of bicarbonate, is directly involved in “light reactions.”

This “bicarbonate effect” influences molecular processes. The role of carbon dioxide (CO2) or bicarbonate in the photosynthesis was clear to researchers from the very beginning of the history of photosynthesis.

Its anti-stink bomb effect goes deep to rid us of all that is out of place inside of us. It cleans us and our refrigerators of rot and what better way to understand cancer.

Cancer cells are rotten sick cells slowly killing us choking us of our life energy as they eat us out of house and home. 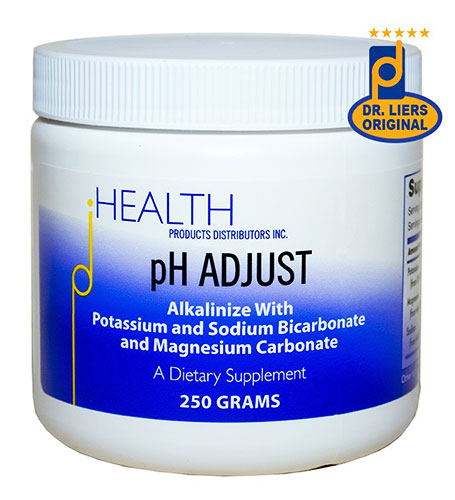 This is my new favorite ways of getting bicarbonate.

pH ADJUST may be used to increase salivary and urinary pH; counteract overly acidic conditions in the digestive tract, blood, and kidneys; and to supplement the body with the minerals potassium, magnesium, and sodium.

Potassium is excellent for heart health and in potassium sufficient people, it reduces risk of strokes.

Potassium also helps maintain healthy digestive and muscular function. On this link is the bicarbonate formula I have used and recommended for years but have switched to pH Adjust because it is also convenient to receive magnesium as well.

Only senseless people warn you away from bicarbonate.