Prepare For Change
Home Agartha The Esoteric Meaning of As Above, So Below 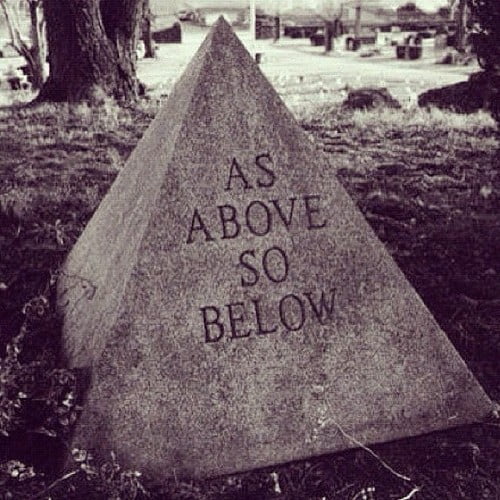 By Moe, founder of GnosticWarrior.com

“As above, so below, as within, so without, as the universe, so the soul” – Hermes Trismegistus

In the heavens above, the planet’s energies are that which is so below on earth. We humans who live on the so below are made of these same heavenly energies of that which is as above. Hence, the microcosm is oneself, and the macrocosm is the universe.

Manly P. Hall had said, “We are the gods of the atoms that make up ourselves, but we are also the atoms of the gods that make up the universe”; and Paracelsus says that man’s spirit comes from the stars, his soul from the planets, his body from the elements. More recently Carl Sagan had said quite simply, “we’re made of star stuff.”

Our immortal souls belong to the Creator like the stars in the heavens.

Like a star that burns bright, we can also burn out and fall like Lucifer. AS ABOVE, SO BELOW. A dying star that once belonged to the Creator becomes ash, just as with the fall of man, his immortal essence also becomes mortal ash.

The as above so below is also the hidden secret biblical alchemical science of the allegorical stories behind the veiling of 666, the beast or Revelation, Lucifer, and Jesus Christ. I have written about this hidden alchemy in the bible many times before in articles such as The Science of 666, The 7 Stars and 7 Golden Lampstands of DNA and From Atom to Adam to Red Man.

The number 666 relates to the carbon atom and man. Carbon is abundant in the Sun, stars, comets, and in the atmospheres of most planets. Carbon-12 is one of the 5 elements that make up the human DNA; being composed of 6 protons, 6 electrons and 6 neutrons, which equates to 666. Its abundance is due to the Triple-alpha process by which it is created in stars. John the Baptist said of the coming Antichrist and the Number of the Beast: “ Let him that hath understanding count the number of the beast : for it is the number of a man; and his number is Six hundred threescore and six.” John was telling us that we are that beast, and the antichrist. 666 is simply the number of man, and this can be proven by modern science.

Lucifer, the fallen angel is the Latin word for the Greek word phosphorus (Greek Φωσφόρος Phōsphoros); a name meaning “Light-Bringer.” The phosphorus atom is of the nitrogen family, but having that characteristic of firing. Hence, the term light bringer for this is the very chemical energy that next to calcium, phosphorus is the most abundant mineral in the body used primarily for energy production, growth and the repair of body cells and tissues. It is the very energy that you need to think, live, create and yes, even have sex with to create babies to further evolve or devolve your family blood line.

God said, let there be light, and there was light.

The very chemical energy known as the Greek phosphorus that makes us human; and like the Latin Lucifer, we too can fall and devolve. Or we can simply rise above the matrix and become like Jesus; leaving the earthly world behind by dying on the cross on the so below, in order to rise to the heavens on the as above to become spiritual beings who are lights in the world. Illuminated teachers and angels that guide those people who are less fortunate to do the same.

These truths are the basis of the human science of chemical energies of the as above and so below known as alchemy, and the science of an inner spiritual knowledge called gnosis. Two ancient sciences that are some of the least understood by current humanity. This selfish ignorance of their pasts that often leads to their early mortality, in which the evolution of their soul is simply not occurring.

Our goal with our lives is to evolve, not devolve. To rise above, not fall below. To love and be loved. Hence, those humans who do not know their pasts, simply never last. Those who live a lie always die, and those who live by truth never die.

Life is a journey in which we each take our own paths, and find our own truths. To find truth and happiness, we all need to play our own tune in accordance with each of our own chosen paths, spiritual gifts and worldly talents. Be still, withdraw from the world of illusions and just be yourself. In a sense, be happy with what the creator has given us and also do not waste our lives by becoming fallen angels doomed to devolve in our own man-made hells for eternity.

If we all play our own tune with these spiritual gifts that we have been given, we can then begin to repair our damaged selves, and then be a light in the damaged dark world that we live in. Find that philosopher’s stone that is within each one of us.

In a sense, create heaven on earth.

AS ABOVE, SO BELOW and AS WITHIN, SO WITHOUT……. The Seven Principles of the Universe:

1. Principle of Mentalism: “All is Mind”

2. Principle of Correspondence: “As is above, so is below. As is below, so is above.”

4. Principle of Polarity: “Everything is dual; everything has an opposite, and opposites are identical in nature but different in degree.”

6. Principle of Cause and Effect: “Every cause has its effect; every effect has its cause.”

7. Principle of Gender: “Everything has its masculine and feminine principles.”