Prepare For Change
Home Uncategorized UPDATE on the DAPL Pipeline….the oil is flowing…but it’s not too late... 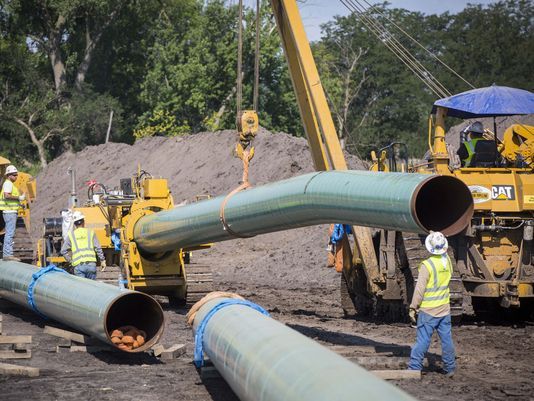 Although oil has begun flowing through the controversial Dakota Access Pipeline, Iowa activists aren’t giving up their battle against the $3.8 billion project.

The 30-inch diameter pipeline started commercially shipping oil on June 1 and has a capacity to transport about 520,000 barrels of oil daily.

But appeals are still pending with the Iowa Supreme Court that opponents see as offering glimmers of hope that the pipeline can still be shut down.

“If any of these court rulings go our way, things could change,” said Ed Fallon of Des Moines, a former state legislator who heads Bold Iowa, an activist group that opposes the pipeline because of concerns involving the environment, property rights and other issues.

The Iowa section runs diagonally for 346 miles through 18 counties from far northwest Iowa to the state’s southeast corner.

The Davis-Brown Law firm of Des Moines is representing Iowa landowners who have appealed to the Iowa Supreme Court over the use of eminent domain to build the pipeline through their farms.

In addition, the Sierra Club of Iowa is appealing to the state’s high court over the Iowa Utilities Board’s decision to grant a pipeline permit to Dakota Access.

A protest was held against the Dakota Access Pipeline at the Iowa Capitol in June 2016. (Photo: William Petroski/Des Moines Register)

But the Iowa Supreme Court has denied a motion by Dakota Access to dismiss the case. The justices are expected to rule later this year or early in 2018.

Jonas Magram of Fairfield, a leader of the Bakken Pipeline Resistance Coalition that includes 30 Iowa groups opposed to the pipeline, said Tuesday his organization is “absolutely not” conceding defeat.

“We know that it is a long shot, but we feel that this pipeline was built in opposition to what the law requires and that oil should be interrupted and that the pipeline should be removed,” Magram said.

Outside of Iowa, four Sioux tribes in the Dakotas are still fighting in federal court in Washington, D.C., hoping to persuade a judge to shut down the pipeline.

Mekasi Camp Horinek, 44, is a member of the Ponca Tribe of Oklahoma and came up to help plant Sacred Ponca Corn on Art Tanderup’s land where the Keystone XL pipeline would cross it on Sunday, May 21, 2017, in Neligh.   Brian Powers/The Register

Meanwhile, Fallon said other anti-pipeline activities are continuing. He spent Tuesday at the Boone County Courthouse, where he and others were supporting a pipeline foe on trial after being arrested in a protest last August in Boone.

Activist Kriss Wells has pleaded innocent to trespass charges, saying his actions were justified to curb global warming and to protect the Des Moines River, which supplies drinking water for central Iowans.

On June 17, the Bakken Pipeline Resistance Coalition is sponsoring a flotilla that will head down the Des Moines River near Pilot Mound with the theme of protecting Iowa’s rivers. Other events are also being planned.

Bakken Pipeline protesters gather to float down the Des Moines River on Saturday where the proposed pipeline would cross beneath the river close to the E18 bridge by Pilot Mound. Brian Powers / The Register

The Dakota Access Pipeline project has been supported by the Midwest Alliance for Infrastructure Now, which is a partnership of entities from agriculture, business, and labor sectors. The coalition says it supports the economic development and energy security benefits associated with infrastructure projects in the Midwest.

Chad Carter, business agent and vice president of Operating Engineers  Local 234 in Des Moines, which has supplied workers for the pipeline project, said Tuesday the union workers have done a great job and he isn’t concerned about activists’ continued opposition.

“They are going to do what they can, but I think it’s a lost cause. There are probably other things to be worrying about,” Carter said.

Meanwhile, Texas-based Dakota Access continues to file weekly construction reports with the Iowa Utilities Board that indicate restoration of farmland and cleanup work is still ongoing in four Iowa counties in north-central and northwest Iowa.

These counties include Calhoun, Sac, Buena Vista and Cherokee.

In a letter sent last month to the Iowa Board, Dakota Access said it was meeting with landowners and was investigating landowner questions and concerns. The company has also been making spot repairs to drainage tile, ditch lines, and terraces, and has performing spring re-seeding in certain areas.

“Completion of restoration work depends on weather conditions and could continue through the summer,”  said Lisa Dillinger, a spokeswoman for Dallas-based Energy Transfer Partners, a parent of the Dakota Access Pipeline.

There have been no leaks reported yet on the Iowa section of the pipeline, said Alex Murphy, a spokesman for the Iowa Department of Natural Resources. The pipeline crosses under the Missouri, Des Moines and Mississippi rivers, as well as other waterways.