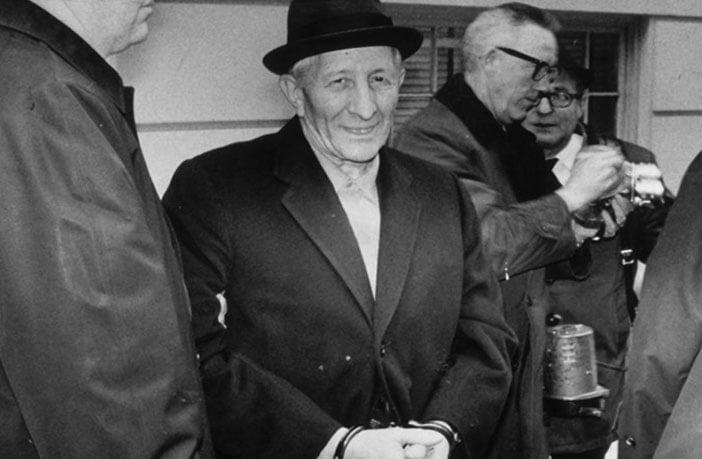 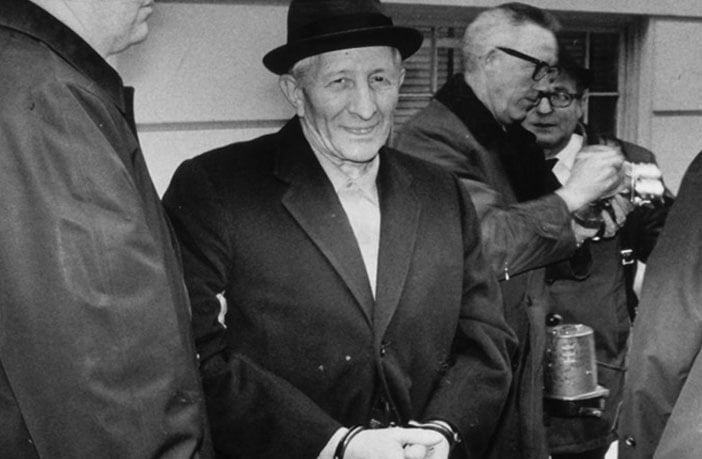 I learned of Vatican corruption and connections with the organized crime when I worked in Rome. I saw it firsthand there and in the little town I lived in, Campagnano di Roma, I had dinner on a few occasions with a Mario Cuomo. He wasn’t the political guy here in the states but a top dog in the Naples Mafia, the Camorra. He was, to me, a nice guy, bought me a lot of dinners. I thought he was a wealthy landowner but later learned when I saw him splattered in blood on the front page of the Rome papers, he was in deep in the Naples mob. I will tell you the full story if you come back to the site.  Mob people don’t talk much but I found one and did an interview and radio show with Tony Gambino. This show has been spread over the internet like wildfire. Even today, almost a decade ago, someone downloaded it. I will play his version for you.

Tony Thomas Gambino of the infamous Gambino crime family is going public with information that could “change the face of America’s corrupt leaders” and bring to the surface the real criminal organizations behind what has come to be known as the New World Order.

He will appear again on the Investigative Journal Monday at 7pm central time on www.libertyradiolive.com. Gambino said his prime motivation for telling the “inside details” of Mafia corruption is to prove to Americans how the Vatican and U.S. government work together in orchestrating the huge pedophile and drug rings that are destroying the fabric of American society.

“The information I will be bringing forward could change the face of America,” said Gambino Saturday from his home after just being released from a 20 year prison stint. “I want people to know how the Vatican and U.S. government orchestrate the pedophile and drug trade.

“I know the truth about JFK, Hoffa and 9/11 and how the two organizations I mentioned above worked together with the mob and the CIA/FBI. They were responsible for JFK and 9/11 just like they are responsible for the pedophile rings and drug trafficking.”

On a previous Investigative Journal show, Gambino gave details of how the JFK assassination and 9/11 were accomplished, saying high-level Vatican, U.S. government and Mafia bosses were all involved.He also gave details about the Hoffa murder, adding in upcoming shows he will reveal “much, much more” about the inner-workings of the Mob and its close association with the Vatican and U.S. government.

Regarding Gambino’s last radio appearance, several listeners questioned some of Gambino’s facts and conclusions, saying Lucky Luciano, Gambino’s grandfather, didn’t have any children, as well as questioning Gambino’s true identity and some of the facts surrounding the Hoffa murder.

“Who said Lucky, my grandfather, didn’t have kids? That’s ridiculous,” said Gambino about his critics. “Lucky had seven daughters and he kept them away from the public eye and hidden. As for my identity, I’m known in the inner-circles and in many books written about the mob as Tommy Gambino as my real name is Tony Thomas Gambino after my father.

“For those who said Hoffa couldn’t have been laid to rest in an abutment of the George Washington Bridge since it was built in the 1930’s, let me tell them that the day Hoffa was murdered, they were doing construction on Veterans Stadium and the bridge and that’s how he was thrown in wet concrete in a body bag while he was still alive.”

Here are some facts Gambino presented in his last radio interview about JFK, Hoffa and life in general growing up in the Mafia:

“When you grow up in “The Family” like I did, you learn right off the bat that protection comes from everywhere, including the CIA, FBI and blessings from the Vatican who are at the top of the ladder when it comes to benefiting from Mafia street crime,” said Gambino, who became a “Made Man” at the age of five, a Mafia term used for their top street captains.

“The Vatican officials, federal judges, top politicians all used to get regular pay-offs from the Gambino Family and, in fact, the Vatican and U.S. government make more money off the illegal drug trade then we did.

“That is why I am talking after just getting out of jail after 20 years. I am talking because people need to know the U.S. government and the Vatican are more dangerous and corrupt then the Mafia ever was.

“For example, I know for a fact the Cardinal in Palermo runs the Sicilian mob and former Cardinal Spellman of New York was considered the Vatican’s American Godfather since he pulled the strings and had his hands deep into organized crime.

“I know for a fact Bush, the Pope and other top Vatican and U.S. government leaders had prior knowledge and help organize 9/11. They did it for many obvious reason, one being instigating the war in Iraq. But they also did it to get their hands on all the gold that was hidden below in the Twin Towers.

“My grandfather’s construction company built the Twin Towers and after it was completed, I know they went in and put in big underground vaults to house an enormous amount of gold which is now in Bush’s and Vatican hands in order to fund the war.”

Besides implicating the Vatican and Bush in 9/11, Gambino set the record straight about the JFK assassination, saying he was in Dallas when Kennedy was shot and the fatal bullet came from a shooter located in an underground storm drain.

“I was there when he was shot and I know for a fact Rosselli was in the storm drain doing the shooting and Frank Sturgiss was also part of the hit team,” said Gambino. “The same group of guys we have talked about in the Vatican and U.S. government gave the orders and asked the Mafia families for help in taking down Kennedy.”

Growing up on the streets of New York in one of the top crime families, Gambino recalls getting his first lesson of Mafia life at the age of 13.

“My grandfather was Lucky Luciano so I had it made,” said Gambino, now 63 and living on the East Coast with a probation stipulation that he can’t associate or talk with any organized crime figures. “Lucky had all the politicians and even the Vatican heads in his pocket. He was making $55 to $100 million a week and when Vegas opened the money really started to roll in.

“He got Frank Sinatra and many others like Marylyn Monroe, Tony Bennett, Dean Martin, Clint Eastwood, Sammy Davis started in Hollywood. He then would take a percentage of their earnings and this went on for their entire careers.

“Remember, the horse’s head being cut-off in Godfather I and then put in the Hollywood producer’s bed? That really happened and it had to do with forcing a Hollywood producer to star Sinatra in one of his movies.”

Gambino also had inside information about how union boss Jimmy Hoffa was really killed, saying his time ran out when a huge Mafia debt wasn’t repaid.

“Hoffa was working behind the scenes with crack head and truck hi-jacker, John Gotti,” recalls Gambino. “That’s all Gotti was good at and when they brought in a $5 million drug truckload, Hoffa got deeper in debt to the other Mafia bosses.

“He never gave his courtesy calls to the bosses for repayment and finally his time ran out so he was killed. They picked him up, put him in a body bag alive and then dumped his body in one of the concrete abutments at the George Washington Bridge while the concrete was being poured. All they did was pay the concrete man $150,000 and the whole thing has been covered up. But that is where Hoffa’s body is today and I know that for a fact.”

Although Gambino knows he’s crossing a sensitive line for going public about the inner-workings of the Mafia and its complicity with the Vatican and U.S. government, he added that it’s important for Americans to finally understand how things “really work on the streets” and how Church, State and big business are working together to destroy America.

And if there remains any doubters that the Vatican and Jesuit Order have had its dirty hands in organized crime in order to destroy the moral and financial fabric of the U.S., Gambino’s confessions should lay that to rest.

“If you don’t believe the hard facts and the hundreds of researchers who have implicated the Vatican to the demise of America, then believe Gambino because he learned it first hand from being on the streets and working with the top crime bosses. He has nothing to gain from lying since he has already served his time and wants to set the record straight once and for all regarding who are the real controllers of the New World Order,” said one patriot close studying and alerting America of Vatican and Jesuit intrigue.

The Investigative Journal Radio Show is produced by Greg Anthony Szymanski and  is broadcast on First Amendment Radio as well as on YouTube. The show previously ran for 11 years on other stations.

During Greg’s tenure as a real live journalist working for the lying mainstream media, he worked in Rome for 6 years, experiencing Vatican intrigue first hand. He was nearly killed in a terrorist attack.

“It was a close call,” said Greg, looking back on the incident. “I was in the hallway just seconds before the explosion which ripped the hallway to pieces. Luckily, I was going down the stairs to the news room when it went off.”

Greg said this near death experience changed his life, leading him on a quest to find out the evil roots of terrorism as well as CIA and Vatican/Jesuit involvement.

“That explosion, one of many during those years in Rome, had to be an inside job, said Greg.

This article (Tony Gambino of the Gambino Crime Family: “The Vatican Runs the Mafia”) was originally published on Inside the Investigative Journal and syndicated by The Event Chronicle.