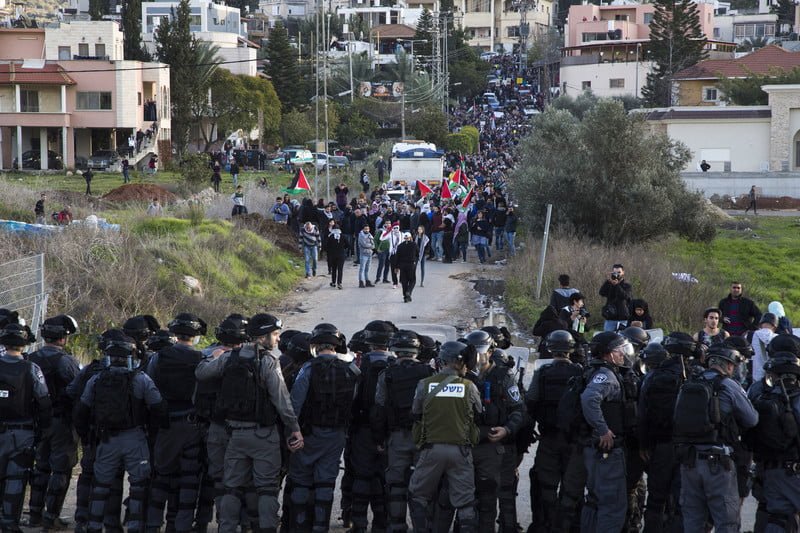 Palestinian citizens of Israel march against home demolitions in Arara, a town in the Wadi Ara region that Netanyahu wants transferred to a Palestinian entity, January 2017. ( Keren ManorActiveStills )

Benjamin Netanyahu is proposing that Palestinian citizens of Israel be stripped of their citizenship under a “peace” deal that would place them in a future Palestinian entity.

The Israeli prime minister recently told American officials, according to a report in Haaretz, that “Israeli-Arab communities could move under Palestinian control” as part of a final status agreement.

Commonly referred to as “transfer,” this proposal amounts to ethnic cleansing. It is not a new idea, but Netanyahu’s broaching it represents a further step in the Israeli government formally adopting policies once considered taboo even by many Israelis.

The area Netanyahu has in mind – at least initially – is Wadi Ara, a region in the north, including the major town of Umm al-Fahm.

Some 1.5 million Palestinians have citizenship in Israel. They are the survivors and their descendants of the Nakba, the Zionist ethnic cleansing of the vast majority of the Palestinian population from what became Israel before and after it was established in 1948.

The idea that this would be an “exchange” is clearly absurd since none of what Netanyahu proposes to swap is Israel’s to begin with: West Bank settlers live on land stolen from Palestinians in violation of international law.

Meanwhile, the rights of Palestinian citizens of Israel – who in any such move would be deprived of the right of determining their own fate on land that is theirs by birth – are not a gift from Israel, which was established by force and conquest in their country at their expense.

So-called population exchanges have an ugly history; they were practiced before the modern era, when it was accepted that rulers treated people like property.

But the Universal Declaration of Human Rights and other norms enshrined after the atrocities of the Second World War vested rights in individuals and outlawed forced displacement and the arbitrary removal of citizenship and nationality.

But as I argued in my 2014 book The Battle for Justice in Palestine, Israel’s claim that it has a “right to exist as a Jewish state” cannot be realized without the massive and constant violation of the most basic principles of human rights, equality and anti-racism.

This can be seen by following the logic of Netanyahu’s proposal. He talks about the transfer as part of a “final status” deal.

But what kind of a “peace” would Netanyahu contemplate? In his first White House meeting with US President Donald Trump in February, the Israeli leader would not commit explicitly to any sort of “two-state solution.”

He insisted though that in any deal Palestinians must recognize Israel as a “Jewish state” and Israel “must retain overriding security control over the entire area west of the Jordan River.”

So adding all the elements together, Netanyahu’s plan would take Palestinians in Israel, who currently possess rights as citizens – albeit limited by law and inferior to Jews – and move them to a situation where like the rest of the Palestinians under perpetual Israeli military occupation they would have no rights at all.

In March, a landmark UN report concluded that “Israel has established an apartheid regime that dominates the Palestinian people as a whole.”

“The mission of preserving Israel as a Jewish state has inspired or even compelled Israel to pursue several general racial policies,” the report states. These include “demographic engineering, in order to establish and maintain an overwhelming Jewish majority in Israel.”

The UN report also noted that while Israel maintains a formal democratic system for citizens of the state, it prohibits anyone from using that system to challenge the regime’s fundamentally racist set-up: “Israeli law bans organized Palestinian opposition to Jewish domination, rendering it illegal and even seditious.”

Netanyahu would do away with the merest threat of Palestinian citizens of Israel using their votes to challenge this domination by stripping them of their citizenship.

The UN report, quickly suppressed by the UN secretary-general on American orders, stresses that it does not directly compare Israel to apartheid South Africa.

Rather, it measures Israel against the definition of the crime of apartheid in international law, which is includedin the founding statute of the International Criminal Court.

As that racist regime came under increasing pressure to end white supremacist rule in the late 20th century, it created a system of “bantustans” – nominally independent Black-ruled states.

If Black people wanted to vote, the apartheid government said, they were welcome to take citizenship in one of the bantustans – impoverished strips of land stretched across remote areas of South Africa.

But the “independence” of these states – not recognized by any country – was a total sham. They were tin-pot dictatorships run by collaborators with the white racist regime.

The bantustans were a mechanism to remove Black people physically – by encouraging or forcing migration to them – and politically from South Africa, while providing no real rights.

It is difficult to find any difference with what Netanyahu – who has made clear his aversion to seeing Palestinian citizens of Israel vote – is proposing.

There is one key difference: unlike with apartheid South Africa whose bantustans met universal rejection, many in the so-called international community, including Barack Obama when he was president, have eagerly adopted Israel’s racist and segregationist conception under the slogan of “two states for two peoples.”

The idea of racial gerrymandering has found favor with some of Israel’s most ardent admirers.

Henry Kissinger, the former US secretary of state who has a long list of war crimes on his record including the killing of millions of people in Southeast Asia, advised Israel in 2004 to “transfer territory with significant Arab populations from the northern part of Israel to improve the demographic balance.”

In recent years, there have been two main Israeli proponents of the idea of further ethnic cleansing of Palestinians, marketed as “land swaps.”

A decade ago Lieberman said he would support a “two-state solution” as long as it provided for real segregation by getting rid of Palestinian citizens of Israel.

In Lieberman’s view, the risk of a two-state solution without transfer was that Israel would end up as “half a state” – meaning that Jews could not guarantee their domination in an entity with more than 1.5 million non-Jewish citizens who expect equal democratic and civil rights.

Lieberman recently reaffirmed in a posting on Facebook that the Jewish state should eventually be ethnically cleansed of virtually all Palestinians.

“There is no reason why Sheikh Raed Salah, Ayman Odeh, Basel Ghattas or Haneen Zoabi should continue to be Israeli citizens,” he said in reference to prominent Palestinian politicians, three of them at the time members of Israel’s parliament, the Knesset.

The other key proponent is Tzipi Livni, the ostensibly “dovish” former foreign minister who is sought for questioning in war crimes inquiries by prosecutors in several countries.

As part of the government of Ehud Olmert the same year, Livni formally raised the idea of transfer with Palestinian negotiators, explaining: “Our idea is to refer to two states for two peoples. Or two nation states, Palestine and Israel living side by side in peace and security with each state constituting the homeland for its people and the fulfillment of their national aspirations and self determination.”

Since no Israeli leader has ever seriously proposed giving a Palestinian state the same rights and sovereignty Israel claims for itself, these declarations are barely disguised calls for a continuation of Zionism’s historic process of dispossessing Palestinians and calling it “peace.”

A few days ago, senior Israeli minister Tzachi Hanegbi even threatened Palestinians with a “third Nakba” – a reference to Israel’s ethnic cleansing of Palestinians in 1948 and 1967.

One wonders if Netanyahu’s latest proposal is what he meant.