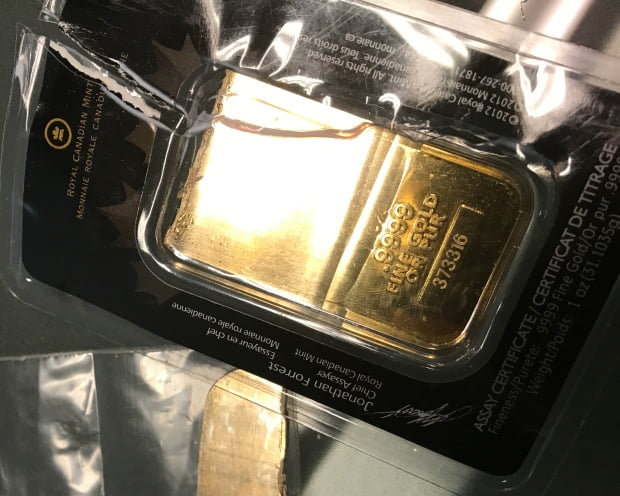 Samuel Tang purchased what he thought was a one-ounce bar of 99.9999%
pure, Royal Canadian Mint gold from a Royal Bank branch

The last time there was a widespread physical gold counterfeiting scare was in the summer of 2012 when as we reported the discovery of a single 10 oz Tungsten-filled gold bar in Manhattan’s jewelry district led to a panic among the dealer community, which then resulted in local jewelry outlets discovering at least ten more fake 10-ounce “gold bars” filled with Tungsten. Fast forward to today when a similar instance of gold counterfeiting has been discovered, this time in Canada, and where the fake bar in question had been “certified” by the highest possible authority.

According to CBC, the Royal Canadian Mint is investigating how a sealed, “pure gold” wafer with proper mint stampings has emerged as a fake. According to the Canadian press, the one-ounce gold piece, which was supposed to be 99.99% pure, was purchased by an Ottawa jeweller on Oct. 18 at a Royal Bank of Canada branch. The problem emerged when tests of the bar showed it may contain no gold at all. And, when neither the mint nor RBC would take the bar back, jeweler Samuel Tang contacted CBC news. 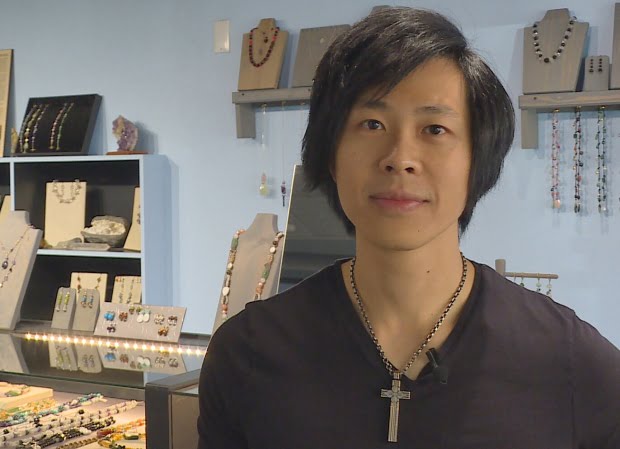 Following the news, RBC felt an obligation to pick up the bar and returned it to the mint for testing, refunding Tang the $1,680 purchase price.

Questions about the fake bar’s origins aside, a more immediate concerns is that, just like in 2012, if there is one fake bar, there are likely many more. William Rentz, a professor at the University of Ottawa’s Telfer School of Management and an expert on investments and equity, says the discovery is “troubling.”

“A currency counterfeiter doesn’t make just one fake $50 bill,” he said. “They make a whole lot of them. So I would suspect this might just be the tip of the iceberg.”

While the RCMP said they are aware of the incident, no formal complaint has yet been made.

As CBC details, the mystery of the fake gold began on Oct. 18, when Tang purchased what he thought was a 99.99% pure gold wafer from an RBC branch just across the road from his Glebe-area boutique, Joy Creations.

He carried the business-card-sized bar, still sealed in its Royal Canadian Mint blister-pack, back to his shop.

His goldsmith, Dennis Barnard, said he cut open the plastic mint packing and placed the one-ounce wafer in a hand-cranked jeweller’s tableting mill.

“I thought my age was catching up with me — because it was so hard to roll,” said Barnard

Once doubts emerged about the integrity of the gold bar, Barnard tried bending the wafer, as pure gold is usually pliable and can be bent easily. Instead, the goldsmith said the wafer snapped, leaving a jagged line. 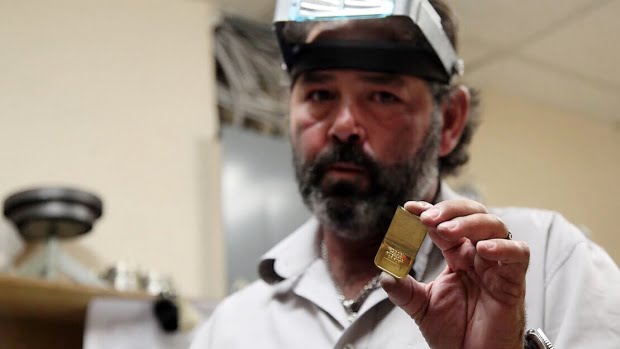 “That’s when I started realizing something is amiss,” said Barnard, who then proceeded to test the gold himself, using an acid testing kit. In an acid test, the jeweller rubs a streak of the metal across an abrasive test stone. Then, a drop of pre-mixed acid is added to the center of the streak.

If the metal streak changes colour or disappears, then the metal is less than the karat of the test acid. Gold of 99% purity is considered to be equal to 24-karat gold. But the bar from RBC failed a test that gold of 18-karat or higher purity would pass. 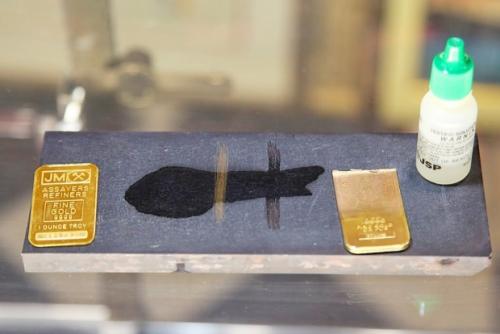 A metal streak from a counterfeit gold bar, right, dissolved in acid, failing a test of purity

“This could be huge. There could be quite a few people out there who’ve been rolled over,” said Barnard.

The news turned from bad to worse when CBC took the same bar to Ernest Marbar, owner of the Gold Lobby, an Ottawa buyer of precious metals. Marbar also found the bar failed an acid test for 14-karat gold. His conclusion: “The bar that came from that package is a piece of junk” the gold expert said, adding that the “million-dollar question” is “how it ended up in that plastic case.” 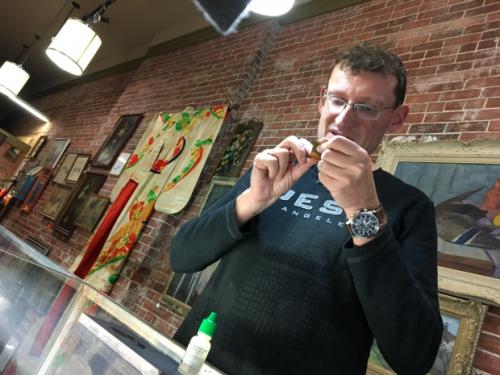 Ernest Marbar, owner of the Gold Lobby, an Ottawa buyer of precious metals,
dismissed the wafer as ‘a piece of junk

Back at Joy Creations, goldsmith Barnard said his concern wasn’t with goldsmiths being duped, it’s with end buyers of the product who assume the purity and quality of the mint-endorsed purchases are sacrosanct: he and Tang are worried the bogus gold could be widely distributed and difficult to find, since most buyers are investors and leave the metal in the mint’s blister-packed cases.

“Who’s going to run around and open their packages, which are sealed by the mint?” asked Barnard. It’s a concern echoed by professor Rentz: “It’s a serious problem. If the trust disappears, it could be seize up the market, at least temporarily.”

Ultimately, the onus is on the those who endorsed the fake product – the mint. Rentz said the mint would be motivated to get to the bottom of this case, since the discovery of a counterfeit undermines confidence in their product.

Meanwhile, Tang said last Monday he spoke with the manager of the RBC branch where he purchased the bar. He said the manager was told by a mint dispatcher they were checking security footage, and trying to trace everyone involved in the handling of the bars.

Amusingly, if the swap turns out to be an inside job, it wouldn’t be the first time. As we reported at the time, last September, 35-year-old Leston Lawrence was found guilty of smuggling C$180,000 worth of gold pucks, each the size of a small muffin, in his rectum over several months.  Lawrence worked at the mint from July 2008 until March 2015. The punchline: his job included purifying gold…