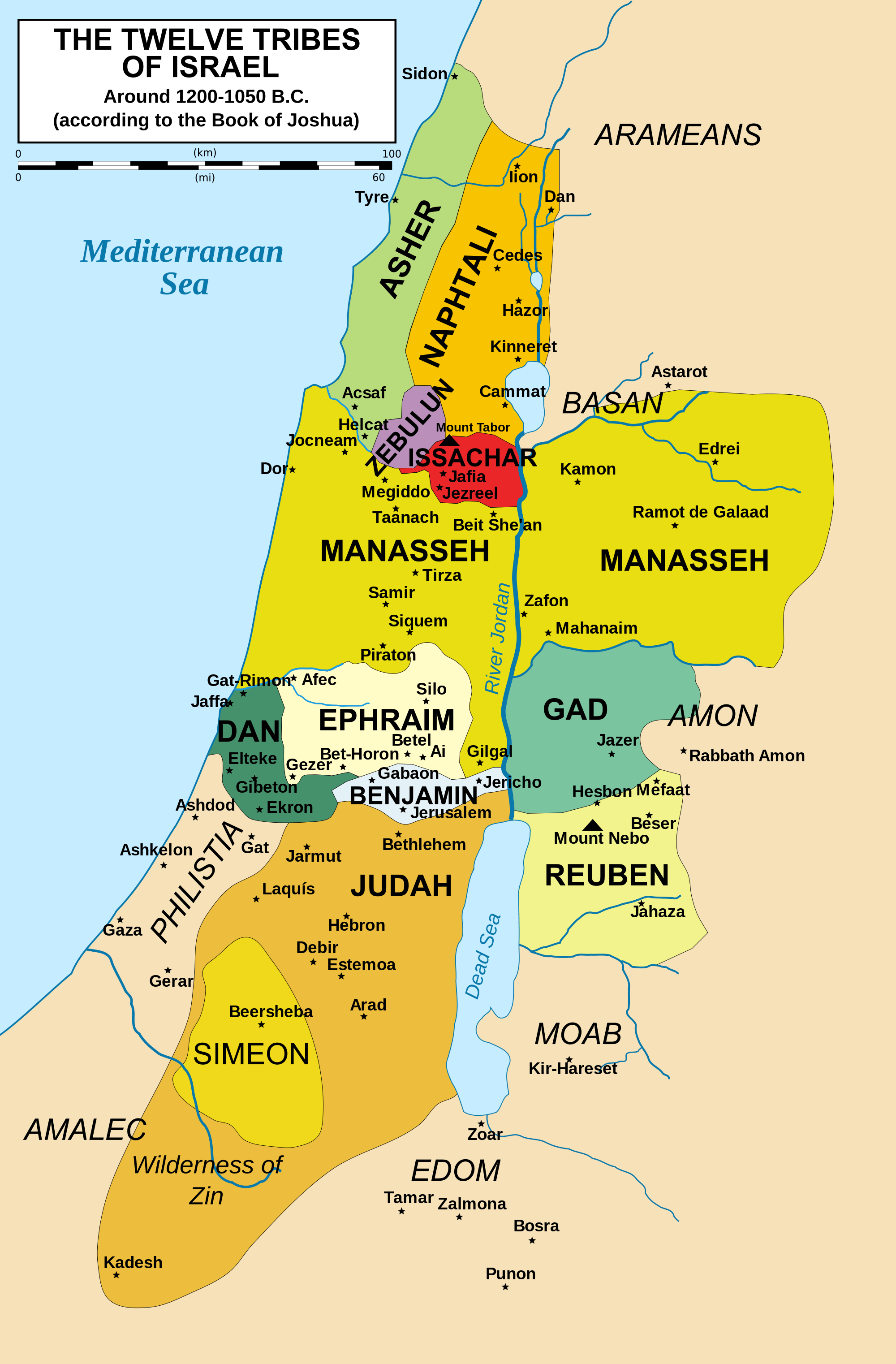 B. There are Semites of every nationality that are not Jews, but of the remaining 11 tribes. Many live in Russia. Others in Europe.

C. The fact that the Khazarian Jews not only are not respectful of that fact, but also fail to welcome the rest of the Israeli clan to the land of Israel, produces bad Karma, which, alas, is blind.

D. Furthermore, if the Jews want to get really technical, the birthright was passed on to the seed of Joseph. 1 Chronicles 5:2. This point is moot if zio’s won’t acknowledge that Israel means 12 Tribes, not just Jews.

These salient facts need repetition, because they are the truth.

Beginning with the eldest son of Jacob (Israel):

Reuben, Simeon, Levi, Judah, Zebulun, Issachar, Dan, Gad, Asher, Naphtali, Joseph and Benjamin. Jacob also fathered Dinah, but she is not considered one of the tribes of Israel – feminists may have a bone to chew on here.

Also, at the end of his life, while in Egypt, Israel asked Joseph to bring his two sons, Ephraim and Manasseh, to him so he could bless them. In that blessing he adopted the two boys as his own, thus making for two more tribes. This is recorded in Genesis 48:5. As an aside, it was Judah who talked the rest of his brothers into selling Joseph to the nomads who then brought him to Egypt and sold him as a slave to Potiphar. The profit-motive started long ago.

Notice what he says to Joseph in verse 21: [Then Israel said to Joseph, “I am about to die, but God will be with you and take you back to the land of your fathers. And to you I give one more ridge of land than to your brothers, the ridge I took from the Amorites with my sword and my bow.”]

Then, in Chapter 49, Israel gives each of his sons a unique 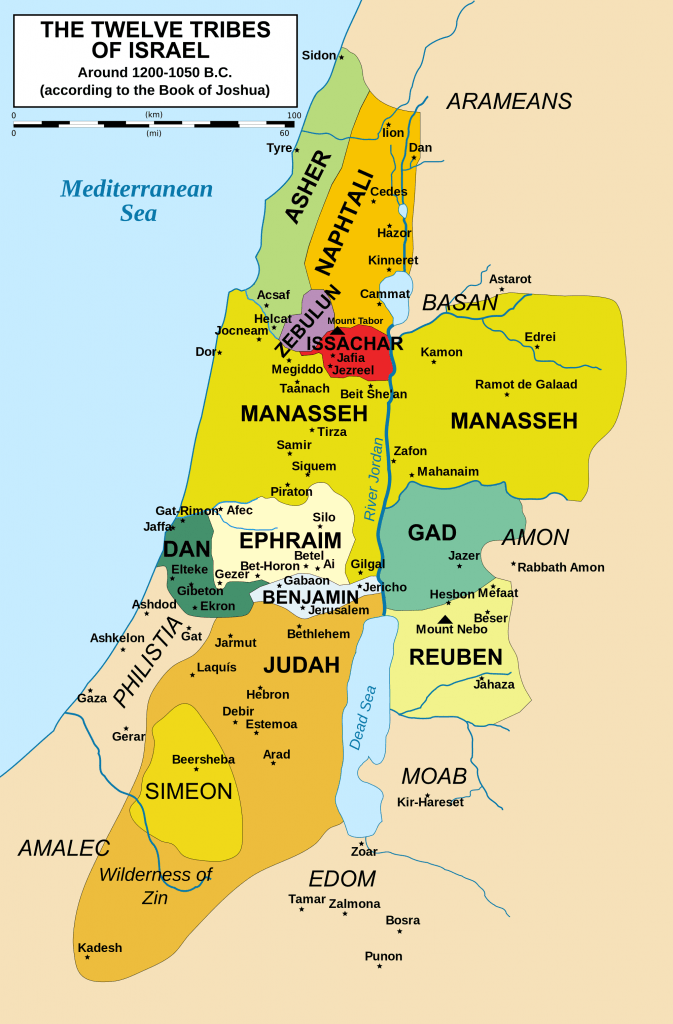 But, it’s also very clear that the Jews don’t have sole rights to the promised land. The greater argument is made when the 12 tribes settled the promised (map) land after their exodus from Egypt. The reason we don’t see the tribe of Levi on the map is because this tribe was consecrated to minister in the Arch of the Covenant and later in the Temple of Solomon and Herod’s Temple. Instead, the Levites were given towns to dwell in among the twelve tribes (map) which became sanctuary cities, for those who fled from the law, which is what David had to do to avoid getting killed by Saul.

Parenthetically, the sons of Jacob were not borm of one woman. He was married to two sisters, simultaneously, Leah and Rachel, who also offered their handmaidens for him to impregnate. Long story. The twelve tribes are the product of four women. This is another topic of discussion.

We could discuss the two Kingdoms that were formed later and the warfare that ensued between them as recorded in Kings and Chronicles, but that’s tangential to the main point that the Jews don’t have exclusive rights to the land they claim as their own.

From a mathematical perspective, the Jews are outnumbered 11 to 1. There are 11 times more Israelites that are not Jews than there are Jews. This is not including Arabs, who are also Semites. So, this Anti-Semite narrative really doesn’t wash at all. And it’s not as if Jews don’t troll other Jews or as if there are no opposition parties in Israel or as if Orthodox Jews are not being jailed for demostrating against the draft. Of course, we’ll never hear the ADL or AIPAC, or the ACLU mention any of this, because it doesn’t serve their narrative. Anyone with any kind of European ancestry is 99.999% certain to be an Israeli Semite, a descendant of one of the eleven tribes. The rest of humanity has either descended from Esau, Jacob’s brother, from whom the Arab nations came into being or from Noah’s other sons or from whoever engendered the African tribes. 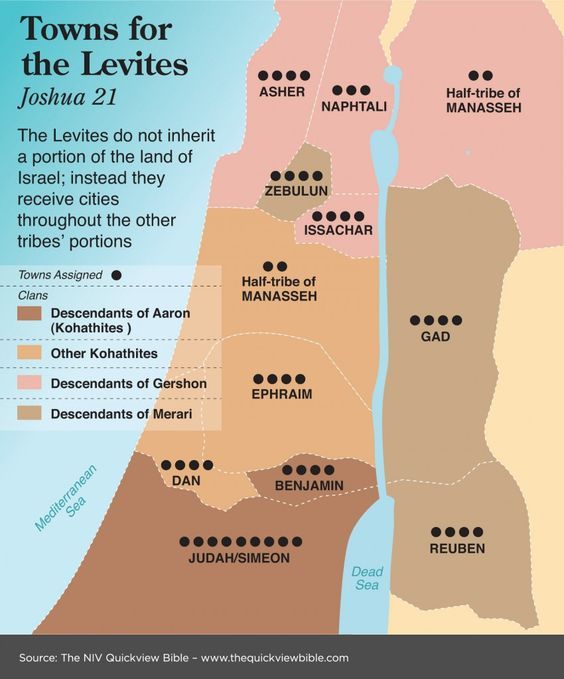 I’m not, by a long shot, an expert on Palestinian historicity. I see a spectrum of authorship on the topic, ranging from A History of the Palestinian People: From Ancient Times to the Modern Era, a non-fiction book by Assaf Voll, in which, in characteristic Zionist chutzpah, the book’s 120-so pages were left blank, raising the book to the #2 position on Amazon, before it was pulled from sale – only after it condemned the Palestinians to having no history of any kind – to a more moderate view that the Palestinians of the late 19th and early 20th century were simply subjects of the Ottoman empire – an empire much like a modern EU where labor forces flowed freely, inviting the theory that the “Palestinian” region was home to a cosmopolitan population, as opposed to a unique race or culture – to the more archaic interpretation that Palestinians are somehow descendants of early Canannites, who populated the region before the 12 tribes moved in to conquer them, following their Exodus from Egypt.

With respect to invading Empires, that region has been conquered by Assyrian, Persian, Greek, Egyptian and Roman Empires; the remaining monuments attest to massive crossover of cultures, begging the question: are the descendants of these empires not equally entitled to Palestine?

The most archaic narrative that forms the basis for Palestinian land ownership begins with the post-deluvian generations of Noah. Ham, a son of Noah, was in turn the father of Cush, from which Nubia and Ethiopia came from; Put, from which Libya and Morocco came from; Mizraim, from which Egypt came from; and Canaan, who was the youngest son, from which Syria and Eretz Israel (later called Palestine after 135 CE) came from.

Canaan’s sons were Zidon and Heth, and they propagated into the Jebusites, the Amorites, the Gingashites, the Hivites, the Arkites, the Sinites, the Arvadites, the Zemarites, and the Hamathites.  Afterwards, these Canaanite families branched out even further.  The Canaanite boundary went from Zidon going toward Gerar, as far as Gaza; going toward Sodom, Gomorrah, Admah, and Zeboiim, as far as Lasha. When the 600,000 Israelites came out of Egypt and were commanded by God to destroy these tribes, this is what they faced (map).

Now, we come to the Greater Israel promise (or Project), which God promised the Israelites through Moses their prophet. And this is where the polemic starts. Some argue that Israel should stretch to the Euphrates, because father Abraham was promised as much by God. Biblical text. However, Abraham is the father of both Israelis and Arabs. So, this argument does not hold much water for Israel. It holds water for descendants of Esau (Jacob’s brother), though. The Palestinians can claim that God gave them the same right to dwell in that region as he gave the Israelites.Traditional Jewish interpretation, and that of most Christian commentators, define Abraham’s descendants as Abraham’s seed only through his son Isaac and his grandson Jacob, to the exclusion of Ishmael (Isaac’s brother) and Esau (Jacob’s brother, upon whom the birthright did not pass).

Some argue that Moses was promsied even greater latitude and that the swath of land promised Israel was to stretch from present-day Beirut eastwards to Baghdad, south to the Persian Gulf (absorbing Kuwait), then westward across northern Saudi Arabia, swallowing Jordan & Syria, to the eastern bank of the Nile, by the Sudanese-Egyptian border, then north to the Mediterranean, along to Beirut. This is the Zionist Greater Israel vision. So, when people ask ‘what is the zionist end game?’, this is it. Your Mossad friends may corroborate this factoid. They will use proxies (USA-EU) to achieve their aim. Some have taken even greater liberties and pushed the NW corner of Greter Israel further north (map).

Biblical references: A B C

The real Jews, who see past the Zionist Crypto-Jews’ plans, are vehemently opposed to the very formation of Israel and, definitely, to any expansionist misadventures. Of course, the world knows that prior to 1948 Jews and Arabs lived in harmony within the region. That’s another discussion.