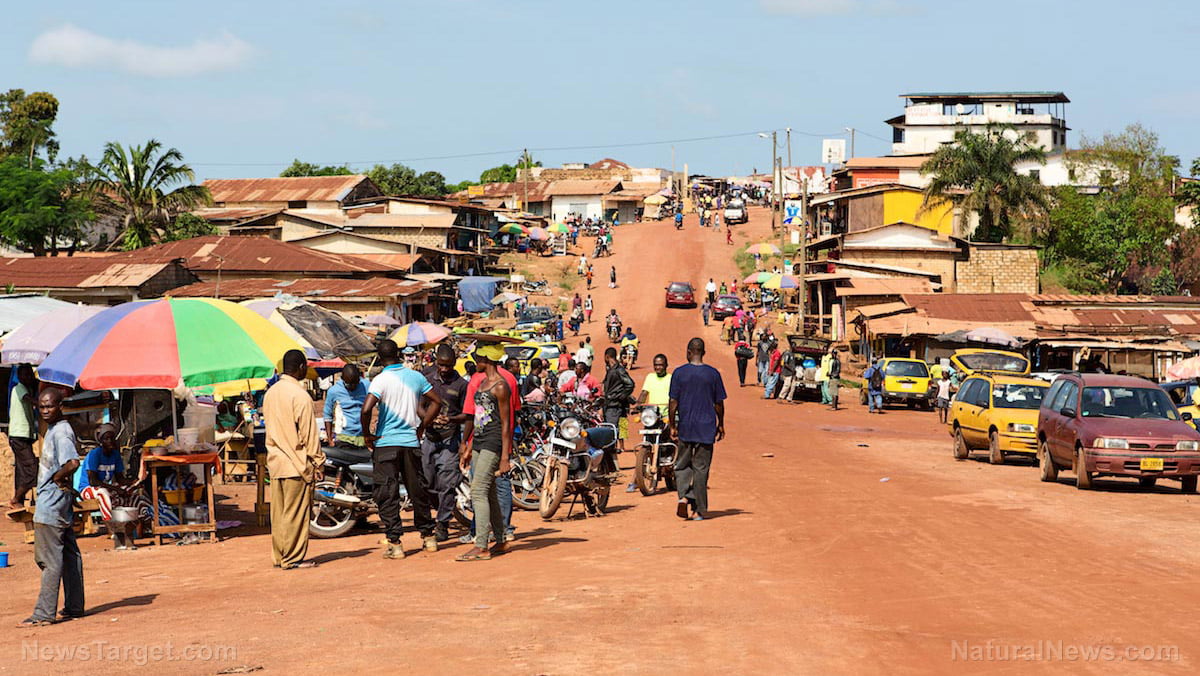 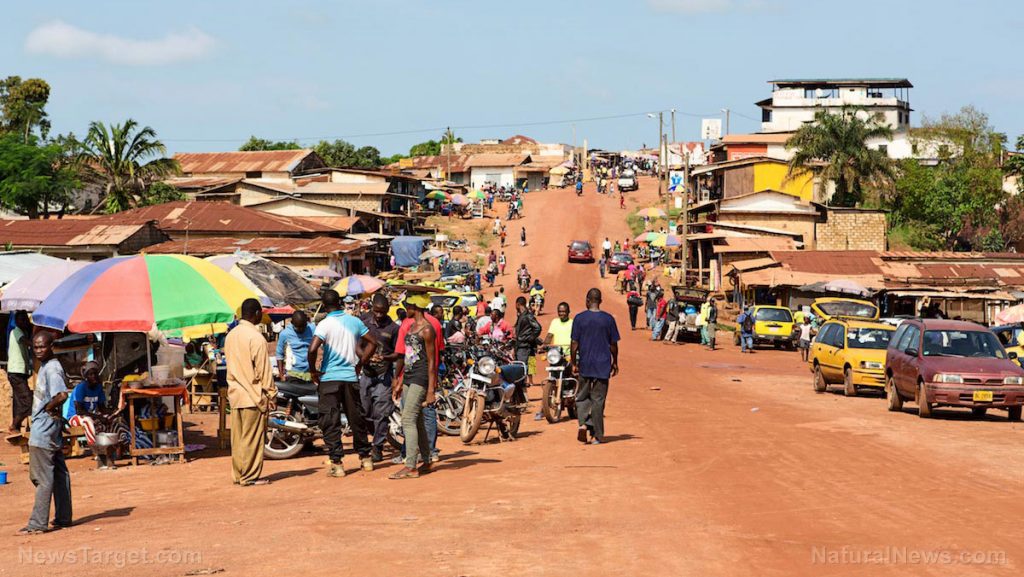 Thousands of people have been infected and over 143 are now reported dead from the plague outbreak that’s now threatening Africa, reports the UK Daily Mail. “Health officials are unsure how this year’s outbreak began,” reports the paper. “Experts warn the disease spreads quicker in heavily populated areas.”

“Africa’s rapidly growing human population is predicted to more than double by 2050 – a staggering increase of three and a half million people per month,” Prince William explained during a recent event hosted by the Tusk Trust, a charity that is committed to protecting African wildlife.

According to The Telegraph, Prince William continued, “Urbanization, infrastructure development, cultivation – all good things in themselves, but they will have a terrible impact unless we begin to plan and to take measures now.”

What’s the quickest and easiest way for globalists to eliminate targeted human populations? Release a weaponized infectious disease and let it spread from city to city while using the outbreak to strengthen government funding of the vaccine and pharmaceutical industries. This, of course, is a form of medical genocide.

Yet as we’ve repeatedly seen, vaccines and pharmaceuticals are now confirmed to be routinely used to reduce targeted populations rather than save lives. Just last week, for example, a bombshell science paper was released that documents the covert infertility chemical being spiked into W.H.O. vaccines administered in African nations. From Vaccines.news:

[A] bombshell science paper has emerged that confirms the use of covert sterilization chemicals in World Health Organization vaccines deployed in Africa. Entitled, “HCG Found in WHO Tetanus Vaccine in Kenya Raises Concern in the Developing World,” the paper documents the covert deployment of an infertility chemical in vaccines that are administered to young black women in Kenya.

… [A] covert depopulation program is being run by the World Health Organization, targeting Africans for extermination via infertility chemicals administered under the guise of “vaccines.” These vaccines, notably, contain chemicals that are administered without the informed consent of the women being injected. In fact, the women are deliberately lied to and told the injections are meant to “protect your health.” But the real reason for the shots is to exterminate blacks in the name of “science” and “medicine.”


Local governments, in other words, told young African women they needed these vaccine injections for their own health and safety. But the real agenda was to cause their bodies to kill their own unborn babies as part of a globalist depopulation agenda. Africa is repeatedly chosen as a testing ground for weaponized depopulation viral and bacterial strains, by the way, which is one reason why so many deadly, hyper-aggressive diseases are found spreading in Africa.

Never forget that the Ebola outbreak of 2014 took place in Africa, and to this day there are enormous questions about whether the U.S. Dept. of Defense manufactured / weaponized that Ebola strain. Dr. Cyril Broderick, a Professor of Plant Pathology, wrote in 2014 that he believes Ebola was manufactured and deliberately released in Africa as a weaponized viral strain.

His article, which originally appeared in The Liberian Observer, was later censored off that website. However, you can find his original article at InfiniteUnknown.net, or search for for “weaponized Ebola” at GoodGopher.com.

Further supporting the notion of a weaponize Ebola release in Africa, Prof. Jason Kissner wrote in 2014:

We can now be extraordinarily confident that the U.S. government is lying, in key material respects, about the latest Ebola outbreak–and not just because it lies about nearly everything of political consequence. This article shows that there are compelling reasons to believe we are being told three big lies about Ebola. It also offers a simple, rational, yet disturbing, explanation that very tidily accounts for all three lies. The explanation supposes that the current Ebola outbreak consists in an act of U.S.-linked bioterror.

U.S. government PATENTED Ebola in 2010 and claims ownership over all the blood of Ebola victims

Further confirming the bioweapons origins of Ebola, we also know that the “impossibly rapid vaccine response” in 2014 was completely scripted. In addition, we also know the U.S. government patented the current Ebola strain in 2010, proving it was an invention. Ebola vaccines were already developed in advance of the outbreak, then rapidly rolled out in a staged “reaction” to the spread of the viral strain. As documented in Natural News:

On the very same day that vaccine maker GlaxoSmithKline is being fined $490 million by Chinese authorities for running an illegal bribery scheme across China, the media is announcing the “astonishing” launch of human trials for an Ebola vaccine.

Care to guess who will be manufacturing this vaccine once it is whitewashed and rubber-stamped as “approved?” GlaxoSmithKline, of course. The same company that also admitted to a massive criminal bribery network in the United States, where felony crimes were routinely committed to funnel money to over 40,000 physicians who pushed dangerous prescription drugs onto patients.

This is the company that is now — today! — injecting 60 “volunteers” with an experimental Ebola vaccine. “Normally it would take years of human trials before a completely new vaccine was approved for use,” reports the BBC. “But such is the urgency of the Ebola outbreak in west Africa that this experimental vaccine is being fast tracked at an astonishing rate.”

As any vaccine-related virologist already knows, the process of going from an in-the-wild infection of Ebola to a manufactured vaccine ready for human trials simply cannot be achieved in a matter of a few weeks or months. Apparently, we are all to believe that a spontaneous scientific miracle has now taken place — a literal act of vaccine magic — which has allowed the criminal vaccine industry to skip the tedious R&D phases and create a vaccine ready for human trials merely by waving a magic wand.

The far more likely explanation, of course, is that all this was scripted in advance: the outbreak, the international cry for help, the skyrocketing of the stock price for Tekmira (which has received financial investments from Monsanto), the urgent call for a vaccine and now the spontaneous availability of human vaccine trials. It’s all beautifully scripted from start to finish, better than a Shakespearean tragedy played out on the international stage.

The “heroes” of this theater have been pre-ordained to be drug companies and vaccines, and it is already written in the script that vaccines will be heralded as lifesaving miracles of modern science even if they infect people and cause widespread damage as has now happened to young girls in Colombia who are being hospitalized en masse after being injected with HPV vaccines.

W.H.O. antibiotics to be laced with infertility chemicals?

The plague outbreak in Africa will be met, of course, with a wave of antibiotics “treatments” for the citizens. Where do those antibiotics come from? The World Health Organization, of course… the same nefarious depopulation group that secretly spiked Africa’s vaccines with sterilization chemicals as now confirmed by a published science paper.

“The [plague] strain can be cured with antibiotics and the WHO money will go towards paying for extra medical personnel, the disinfection of buildings and fuel for ambulances,” reports the UK Daily Mail. In other words, the WHO will be running the mass medication campaign to distribute antibiotics to more Africans. This is the perfect opportunity for the WHO to spike antibiotics with infertility chemicals, thereby achieving its goal of causing spontaneous abortions, miscarriages and infertility across the demographic of young African women.

According to reports, the WHO has pledged US$5 million to this effort. This money, of course, will be put to use distributing laced antibiotics to as many young African women as possible, all in the name of “public health.”

Medical eugenics and the celebration of depopulation “successes”

In the end, the WHO will be cheered. The pharmaceutical industry will be heralded as the savior, and governments will claim victory as yet another outbreak is eventually tamed by what we’re told is a science-based medical advancement that saves lives. Yet the deeper truth that we’ve never told is how these same organizations and drug cartels are actually working to achieve global depopulation goals by any means necessary… even if it means deliberately causing an outbreak so that they can harness the public panic to deliver more infertility chemicals to more black people who are targeted for destruction.

If you don’t yet realize how blacks are systematically targeted for extermination across our planet, you don’t know the real history of science and medicine. I cover the five vectors of planned eugenics-based extermination in this mind-blowing video lecture that’s a “must watch” for all people of African ancestry.