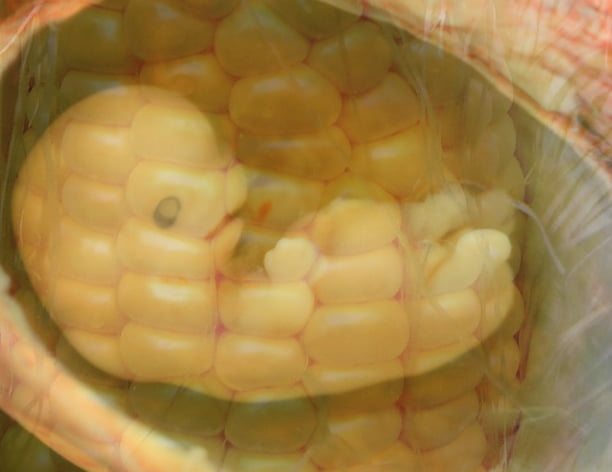 ” Technological progress is like an axe in the hands of a pathological criminal.” ~ Albert Einstein

Whereas the quote above could easily be dismissed as the ‘progress-denying’ sentiment of a disgruntled anti-GMO activist, the fact is that it came from a scientist representing the very epitome of Western rationality and accomplishment.

Perhaps Einstein was reflecting on the inevitable existential consequences of the so-called “technological imperative”–whatever can be done, will be done.  Fundamentally amoral and irrational economic and political forces drive technology’s feverish pace, infusing a certain arbitrary cruelty and disequilibrium into everything it touches.

In our continual drive to ‘improve upon Nature’ in the name of much-hyped, ‘life-saving’ biotechnological innovations, the line between humane and inhumane eventually is crossed, and there seems no going back.  Biopollution from defective or dangerous GMO genes, for example, is virtually impossible to undo once unreleased into the biosphere; you can’t “recall” a defective gene like you can an automobile. Nor can we remove from our bodies the surreptitious viruses (e.g. simian virus #40 (SV40)) that contaminated millions of first-generation polio vaccines. In many ways our moral fiber suffers from the same susceptibilities. Once we have crossed a certain line – be it theft, lying, or worse, etc., – it is difficult, if not impossible to ‘go back’ and regain our innocence. Such is the human condition. And this is why we must carefully consider the medico-ethical implications of new technologies, whose developments we must first be aware of in order to guide, regulate and sometimes terminate.

For example, few are aware that the cloning of human embryos for ‘therapeutic purposes’ was made legal in the UK in January, 2001 through an amendment to the Human Embryology Act.[i]  Not long after, in August 2004, the Human Fertilisation and Embryology Authority (HFEA) approved the first license for cloning human embryos in the UK.  Media reports at the time alleged the legal changes would result in the use of cloned human embryos to create “spare body parts.”

In an article published in 2000 titled, “Biotech Cannabalism,”[ii] C. Ben Mitchell, PhD reflects on the pro-cloning movement by quoting a proponent’s justification: “If you could use tissue from human embryos to save hundreds of lives, there must be a moral imperative to do it.” Mitchell disagrees, countering: “[C]reating a human being for the purposes of killing that person for another human being’s health, sounds an awfully lot like cannibalism, only worse.”

Calling Vaccines From Aborted Fetuses What They Are: Cannibalistic

Whereas cannibalism is considered by most modern societies to be the ultimate expression of uncivilized or barbaric behavior, it is intrinsic to many of the Western world’s most prized biotechnological and medical innovations. Probably the most ‘taken for granted’ example of this is the use of live, aborted fetus cell lines from induced abortions to produce vaccines. Known as diploid cell vaccines (diploid cells have two (di-) sets of chromosomes inherited from human mother and father), they are non-continuous (unlike cancer cells), and therefore must be continually replaced, i.e. new aborted, live fetal tissue must be harvested periodically.  A good portion of the CDC’s immunization schedule requires the use of these human fetus-originated vaccines, and these include: rubella, measles, mumps, rabies, polio, smallpox, hepatitis A, chickenpox, and herpes zoster. Additionally, so-called “abortion tainted vaccines” cultivated on transformed fetal cells (293, PER.C6) are in the developmental pipeline, including: “flu, Respiratory Syncytial and parainfluenza viruses, HIV, West Nile virus, Ebola, Marburg and Lassa, hepatitis B and C, foot and mouth disease, Japanese encephalitis, dengue, tuberculosis, anthrax, plague, tetanus and malaria.” [iii]

Unfortunately, to millions who find injecting the biological derivatives of living aborted fetal cells into their bodies, or their children’s, morally objectionable, an increasingly Draconian biomedical establishment is either pressuring, coercing or mandating this to occur, using the faulty concept of “herd immunity” and concomitant biosafety concerns to override an individual’s right to refuse them. And most are completely unaware that aborted cells are used and being injected into their bodies, because the medical ethical principle of informed consent remains just that: a principle, not practiced regularly. Furthermore, beyond the obvious moral/ /religious/philosophical reasons to reject aborted fetal cell derived vaccines, there are real health concerns associated with the introduction of this type of biological material into the human body that are largely considered taboo to discuss.

Biopharming: The End of Choice for Those Who Do Not Want to Ingest Human Proteins

Another way in which the dark specter of cannibalism is resurfacing in our lives is through biotech’s intense investment in biopharming technologies. Also known as molecular farming, biopharming involves creating “drug-producing” GMOs by inserting a gene that code for useful pharmaceuticals or biological products (e.g. antibodies, lactoferrin) into host plants, insects or animals that do not naturally express those genes.

Concerns over the unintended, adverse effects of this technology are growing, primarily because once the genes are inserted into laboratory- or field-trialed organisms, their escape into the biosphere is not just possible, but a statistical inevitability. As we have seen with GMO crops, contamination is a default business strategy for biotech stakeholders, whose GM plants pollinate (some say “biorape“) organic or wild plants rendering them also GMOs. This means that — short of using ‘terminator technology‘ which renders the plants incapable of reproduction – foolproof GM containment is impossible. Eventually we will all be exposed to these GMO plants, insects and animals in some form or other.

There is intense work being done today to create biopharmed “edible vaccines,” which contain deadly viral or bacterial vectors. Obviously, the biopollution created by inserting these genes into plants traditionally used for human consumption and which could find their way into the human food supply could cause life-threatening health problems.  But edible vaccines are only a subset of biopharmed products in the developmental pipeline. There are a broad range of human proteins being ‘pharmed’ using genetically modified animals expressing human genes as ‘bioreactors.’

Below is a small sample of biopharmed organisms in development that could at some point in the future result in the inadvertent ingestion of human proteins (technically, cannibalism):

With biotech weaving into the web of life arbitrarily placed human genes and their biological products, cannibalism (human consumption of human proteins) will become an inevitably in the future.  The question is, will we stand for this reworking of the very molecular and genetic infrastructure of life, or pretend like it won’t also result in the genetic modification of our own bodies.

I A Burkov, I A Serova, N R Battulin, A V Smirnov, I V Babkin, L E Andreeva, G A Dvoryanchikov, O L Serov. Expression of the human granulocyte-macrophage colony stimulating factor (hGM-CSF) gene under control of the 5′-regulatory sequence of the goat alpha-S1-casein gene with and without a MAR element in transgenic mice.

[xvi] N A Matveeva, Iu I Kudriavets, A A Likhova, A M Shakhovskiĭ, N A Bezdenezhnykh, E Iu Kvasko. [Antiviral activity of extracts of transgenic cichory and lettuce plants with the human interferon alpha-2b gene].