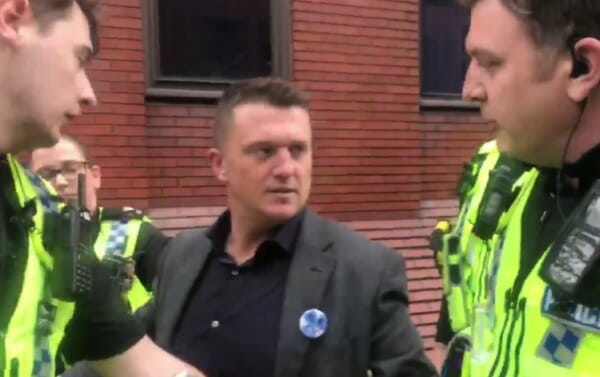 UK activist Tommy Robinson was arrested on Friday for suspicion of breaching the peace while livestreaming to report on the trial of a  child grooming gang and will now have to serve a prior 13 month suspended sentence.

Friends and supporters of Robinson, 35, are asserting that his notoriety and stance on Islam places his life in great danger in prison. According to UK independent reporter Caolan Robertson, Robinson was arrested outside the Leeds Crown Court where ten men are on trial for offenses including child rape, trafficking, and supply of class A drugs to children.

Robinson is heavily focused on Islamic extremism and has had several run-ins with law enforcement over his live streaming.

The UK government is so eager to silence him that they have even placed a restriction on reporters covering the case or his imprisonment.

She pointed to a case in 2016 where a UK man who had placed bacon sandwiches outside a mosque was found dead in his prison cell.

“Tommy has a reputation in the UK as one of the most prolific voices against Islamisation. There isn’t a Muslim that doesn’t know his name or his face. It’s well known anti-Islam prisoners are targets, just a few years ago a man who placed bacon outside a mosque ‘mysteriously’ was found dead in jail,” Southern told Gateway Pundit. “Even amongst the regular population Tommy is a regular target of assault. Put him in a confined space with a surging amount of criminal Muslims and anyone can guess what the result will be. I don’t think it’s too crazy to say this could be a death sentence.”

Robinson’s suspended sentence stems from an arrest last year for contempt of court after trying to film Muslims who had been accused of pedophilia outside a court in Canterbury.