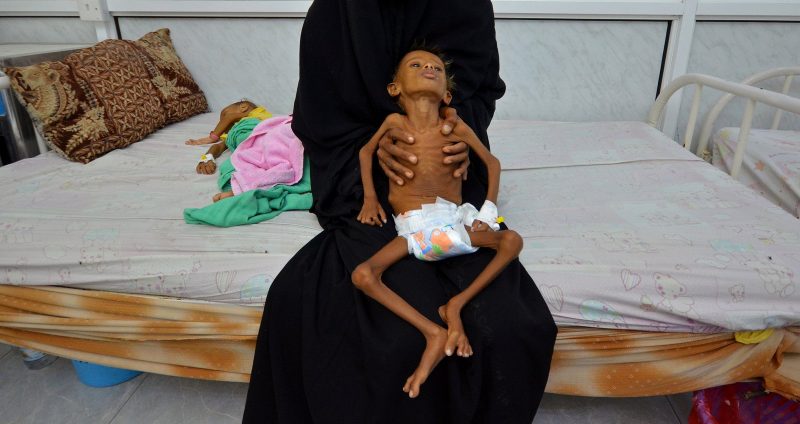 According to the UN, the number of Yemenis in danger of starving to death would rise from the current figure of 8.4 million to 18.4 million by this December. That’s three times the estimated death toll of Jews killed during the Holocaust. 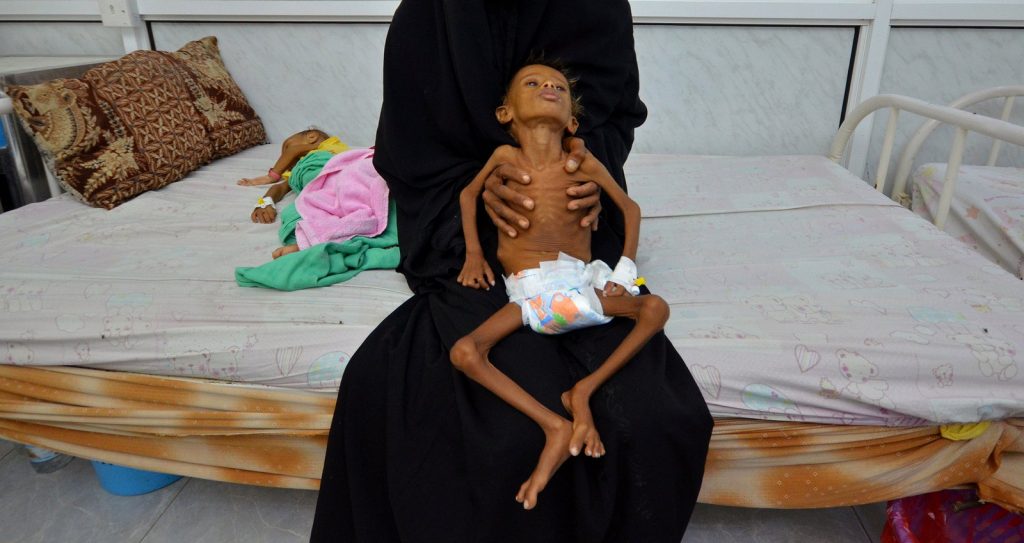 SANA’A, YEMEN – During a briefing last Friday, the UN warned that millions more Yemeni civilians are expected to starve to death before year’s end as a result of a blockade imposed on the country by the Saudi Arabia-led coalition. The Saudis’ unsuccessful bid to quash the Houthi-led resistance movement against Western and Saudi imperialism in Yemen has already claimed the lives of thousands of civilians and transformed the country into the world’s worst humanitarian crisis since the war began in 2015.

Mark Lowcock, the UN’s emergency relief coordinator, expressed his concern regarding the “recent decline of commercial food imports through the Red Sea ports” — adding that, if conditions do not improve, the number of Yemenis at the brink of starvation would rise from the current figure of 8.4 million to 18.4 million by this December. Given that there are approximately 28 million people in Yemen, a continuation of the Saudi-led blockade would mean that nearly two-thirds of the entire country’s population will soon face starvation.

The U.N.’s warning of a growing famine in Yemen comes during the holy month of Ramadan, when the first revelation of the Quran is celebrated by Muslims through fasting. Given the number of Yemenis facing starvation, many Yemeni Muslims will be without food to break their fast.

While the coalition — composed of Saudi Arabia and the UAE, with support from other Gulf monarchies and Western governments — has publicly claimed that it has lifted the blockade after international pressure, the coalition’s “ship inspections” continue to prevent critical supplies – such as food, fuel and medicine – from entering the most populated portions of the country, which remain under Houthi control.

Lowcock stated that the “lifting” of the blockade has had little impact on the crisis, noting that imports are “well short of pre-blockade averages” and are insufficient to prevent the mass starvation of Yemeni civilians. In addition, the blockade has prevented sufficient medicine from entering the country — allowing the worst cholera epidemic in recent history to ravage Yemen, even though cholera is easily treated with inexpensive medication.

The UN’s dire warning regarding the situation in Yemen, undoubtedly the worst humanitarian crisis in the world, comes just as the Saudi-led coalition, with support from the United States and the United Kingdom, is preparing for an assault on the key Yemeni port of Hodeidah. On Monday, a coalition spokesman announced that its forces were within 20 km from the Houthi-held port, which has long been a key coalition target. The UN and other groups have long warned that any assault on Hodeidah would drastically worsen the crisis and greatly increase the number of Yemenis facing starvation.

According to Reuters, tens of thousands of Yemenis have been fleeing the port city in recent days, as fighting in the area intensifies. It remains unclear exactly when coalition forces will attempt to take the city and whether such an operation has been approved by its Western backers, such as the United States, which has continued to supply the coalition with arms and munitions despite its well-documented tendency to target civilian infrastructure.

Beyond the blockade: targeting food production and waging total war

A man looks at cows killed by a Saudi airstrike on a dairy farm in Bajil in Yemen’s western province January 2, 2016. Abduljabbar Zeyad | Reuters

While the blame for the brunt of the crisis has been placed on the coalition’s blockade on the imports of food, fuel and medicine, the coalition has also deliberately targeted the country’s food production and distribution infrastructure. In just the first year of the conflict, the coalition bombed over 350 farms, markets, and other agricultural infrastructure, which had a grave impact given that only 2.8 percent of Yemen’s land is arable. Fisherman have also been heavily targeted over the course of the conflict, with more than 250 fishing boats damaged or destroyed and 152 killed by coalition ships and helicopters as of last December.

The targeting of the country’s food production infrastructure by the coalition continues unabated. Just last Wednesday, coalition planes bombed a series of mango farms in the Hodeidah province, killing at least six and injuring three – all of whom were engaged in harvesting the fruit at the time, according to local reports.

All victims were picking mango fruits
It's the season now pic.twitter.com/e6ecHU8ZFs

The fact that the coalition continues to deliberately target civilian infrastructure, particularly its ability to produce food domestically amidst the blockade, suggests that the coalition is intentionally targeting Yemeni civilians in an attempt to gain an upper-hand against the Houthis.

Indeed, despite being significantly better equipped and enjoying the support of Western militaries, the Saudi-led coalition has been unable to make significant progress against the Houthi militia. For instance, recent military operations conducted by the Houthi and allied groups have resulted in Yemeni resistance groups taking control of over 100 miles of Saudi territory and successfully raiding the Saudi military for equipment and ammunition.

Thus, the coalition’s inability to win militarily against the Houthis over three years since the war began suggests that they are deliberately targeting civilians to offset their lack of military progress, adopting a “total war” strategy that is set to end in the genocide of a majority of the nation’s population.

Top Photo | A six-year-old boy is held by his mother at a malnutrition intensive care unit at a hospital in Hodaida, Yemen | Reuters