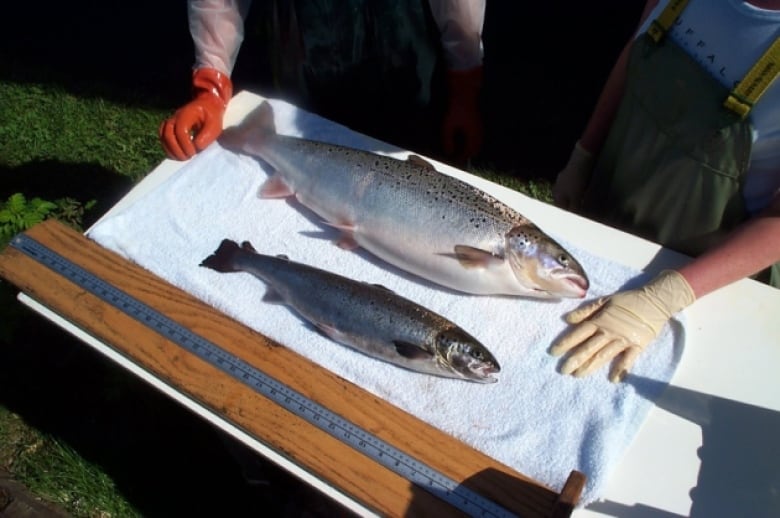 Prepared sashimi products are where you’re likely to find genetically modified salmon, the CEO of AquaBounty Technologies, a Massachusetts-based biotechnology company that produces the fish, told investors, but they won’t say who they’re selling to.

Aquaculture, once a fledgling industry, now accounts for 50 percent of the fish consumed globally, according to an earlier report by an international team of researchers.

The GM salmon grow roughly twice as fast as farmed Atlantic salmon, and the company claims the salmon consume 20 to 25 percent less food per gram. This is due to a growth hormone taken from Chinook salmon and from an eel-like fish, Ocean Pout. However, Food and Water Watch alleged that the growth rate claims are exaggerated.

GM salmon is potentially dangerous to your health

GM salmon could potentially cause more allergies than regular salmon, Jaydee Hanson, the Senior Policy Analyst at the Center for Food Safety explained, though we can’t be sure, due to a lack of proper studies.

AquaBounty “botched” its test for allergic reactions and “The FDA, for reasons I don’t understand, didn’t make them redo it,” said Hanson. “They did another test that was really small, on just six fertile fish and six regular fish. They found the fertile genetically engineered fish were so likely to cause allergic reactions that the FDA said, ‘We’re not going to let you sell fertile fish,’” Hanson said, stressing how small a sample size six fish is. He added that in his conversations with AquaBounty, the company stated it wasn’t going to test for human reactions, as the FDA didn’t require it.

While many meat animals are put onto hormones, they are also taken off them. The FDA requires a waiting time between taking the animals off hormones and feeding them to humans. The salmon, on the other hand, have the hormones built “into every single cell” and they can’t be turned off.

Finally, the genetically modified fish have fewer omega-3s. Hanson explained that omega-6 fatty acids cause inflammation, while omega-3s reduce it, “so you want a fish that has the most omega-3s possible,” said Hanson.

“The ratio of 3s to 6s in this AquaBounty fish is the worst of any farm fish, and this is in AquaBounty’s own data. They compared the levels to normal farm fish and wild salmon. Wild salmon is always the best because they eat shrimp and other high-energy foods, but AquaBounty is feeding these salmon soy, because it’s cheap,” said Hanson, while noting that the AquaBounty omega-3 levels were only 10 percent lower than farmed salmon.

Ron Stotish wouldn’t say exactly who is buying the company’s product but did tell a group of investors meeting in New York that it has sold 4.5 tonnes of it in Canada so far this year.

This is on top of the roughly nine tonnes that were sold last year.

There is no requirement in Canada for the fish to be labelled as genetically engineered, so unless the company does it voluntarily there is no way for customers to tell the difference between non-GMO salmon and AquaBounty’s product.

“The people who bought our fish were very happy with it,” Stotish told the investors. “They put it in their high-end sashimi lines, not their frozen prepared foods.”

The salmon, patented under the name AquaAdvantage Salmon, is engineered to grow at twice the rate of regular salmon, using 20 to 25 percent less feed than farmed salmon.

AquaBounty CEO Ron Stotish, seen in 2010, wouldn’t say who in Canada was buying the company’s salmon, only that they were using it in ‘high-end sashimi lines.’Genetically modified food products are not required to be labelled as such in Canada, but some advocates say it’s high time they were.

“This is an untenable situation,” said Lucy Sharratt of the Canadian Biotechnology Action Network.

“The fact that, once again, the company has let slip a piece of information to investors — but is information Canadian consumers need and don’t have — exposes how much it is that Canadians need labelling.”

A 2017 Angus-Reid survey suggested that 83 percent of Canadians believe some genetically modified food products “should be subject to mandatory labelling in grocery stores, though the consensus is somewhat less clear on which types of GMOs ought to be subject to the rules.”

Fish Is Grown In Panama — From Canadian Eggs

AquaBounty salmon begins life in Prince Edward Island. A growth hormone gene from a chinook salmon and another one from an ocean pout are spliced into the genes of an Atlantic salmon.

The eggs are shipped to a land-based facility in Panama, where the fish grow in tanks.

AquaBounty is hoping to eventually grow the fish in North America. It has a facility in Indiana, but the U.S. Food and Drug Administration is currently blocking the importation of the salmon eggs from Canada, even though the FDA has approved AquaBounty salmon for sale in the United States.

“The company has indicated that it is fully prepared to comply with labelling requirements for its product in order for this process to conclude in the near term,” AquaBounty said in an SEC filing in June.

Speaking to investors on Thursday, Stotish seemed to suggest the delay is more political than procedural. He singled out U.S. Senator Lisa Murkowski, of Alaska, who introduced the amendment prohibiting the import of the eggs needed to produce AquaBounty’s salmon as well as co-sponsoring legislation mandating the labelling of genetically engineered salmon.

“She’s concerned that we might compete with Alaskan salmon,” said Stotish. “Her opposition gets her votes in Alaska.”

Stotish suggested we can expect even more genetically modified salmon in the food supply in the future, though.

He told the investor conference that AquaBounty’s Canadian buyer told him: “We’ll take as much as you can produce.”