Prepare For Change
Home ARCONTES The world is about to learn about Khazarian mafia crimes horrific beyond... 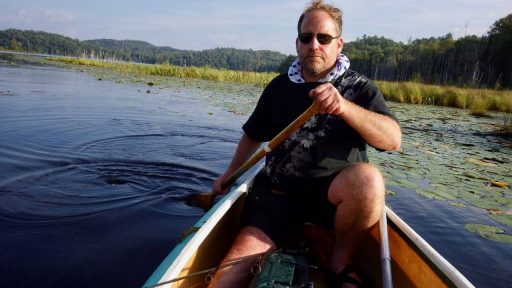 The Khazarian mafia have been torturing, murdering, and cannibalizing children on a horrific scale, and the world is about to find out as military tribunals begin.  Some very disturbing images and testimony sent by the New York Police Department and the CIA show just how evil the Khazarian mafia really is.  These people are beyond truth and reconciliation and do not deserve even a quick death.

Let us start with FBI statistics on missing children in the U.S., so that skeptics can prevent the sheer evil of these deeds from shutting their minds.  In 2015, 442,032 juveniles went missing;  of these, 42,032 were not found.
https://www.fbi.gov/file-repository/2015-ncic-missing-person-and-unidentified-person-statistics.pdf/view

By comparison, in the same year in Japan 17,971 children (the equivalent of 44,927 in the U.S. when adjusted for population difference) went missing, and close to 99% of these children were found.
https://www.npa.go.jp/safetylife/seianki/fumei/H28yukuehumeisya.pdf

The photographs below, sent by the CIA, are linked to CNN star and FRB Vanderbilt heir Anderson Cooper and may give a hint as to what happened to at least some of these children.

Even more gruesome is the video still-shot linked below that was sent to the CIA via courier by the NYPD.  It shows a young girl whose face was allegedly peeled off by Hillary Clinton in a satanic ritual.  Be warned, it is graphic and I stopped watching shortly after the 2 minute mark.
https://youtu.be/zIbY6jyQpJ8

Now I begin to understand the look of sheer horror on the face of George Soros when I asked him a question at a press conference about the families that own the Federal Reserve Board (FRB).  He had probably seen some of this sort of stuff firsthand.

The prosecution of these criminals is set to finally start now that the U.S. military government backing President Donald Trump has secured a majority on the Supreme Court with the confirmation of Justice Brett Kavanaugh, Pentagon sources say.  “Attorney General Jeff Sessions has already met with the real special prosecutor, U.S. Attorney John Huber in Utah, so that the 57,000 indictments may be unsealed,” the sources explain.

“The seating of Kavanaugh on the Supreme Court should unleash declassification of FISA and other documents as well as military tribunals,” the sources say.  Furthermore they add, “The Senate unanimously approved a resolution calling for declassification of 9/11 documents, so the stage is set to take down the Zionists and the deep state.”

Another aspect to starting the prosecution of these criminals is the ongoing U.S./Russian military action against the rogue state of Israel, the sources say.  In particular, “Russian electronic warfare is aimed …

… not just to impose a no-fly zone over Israel, but to stop ICBMs and other missiles from being launched, rendering the Samson option obsolete and making de-nuking the only feasible option,” the Pentagon sources explain.  In other words, Israel can no longer use nuclear blackmail to protect the satanists in the U.S.  Also, Vatican P2 sources confirm that Israeli Prime Minister Benjamin Netanyahu is a satanist mass-murderer who needs to be either arrested or killed as soon as possible.

The U.S. and Russia are also considering imposing a sea and land blockade on Israel to force that state to stop its criminal activities, they continue. 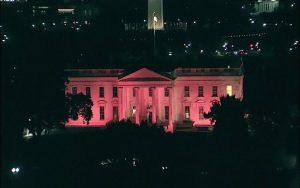 The sources sent this photo with the explanation that “even the White House has declared Red October.”

The Pentagon sources also said, “It appears that the cabal may have lost a submarine or underwater base and retaliated by sending ricin to Secretary of Defense James Mattis and Naval Chief John Richardson.”

What the Pentagon sources were referring to was the destruction of a “Clinton escape residence with entourage, including an underground bunker built to store the gold,” according to CIA sources in Indonesia.

This destruction is appearing in the news as the recent tsunami that hit Indonesia, which even experts quoted by The Washington Post note “…was not a straightforward event,” said Adam Switzer, principal investigator at the Singapore-based Earth Observatory.  “This earthquake was beyond the bounds of the warning systems” available.
https://www.washingtonpost.com/world/asia_pacific/not-a-straightforward-event-how-multiples-disasters-stunned-experts-and-ravaged-a-corner-of-indonesia/2018/10/06/4394e20c-c967-11e8-b2b5-79270f9cce17_story.html

Here the real explanation, according to the CIA:

“Clinton was in control of the gold coming out from the Grasberg mine/Freeport.  The Clinton Foundation/Clinton Global Initiative, with an office in Papua, was the vehicle for laundering the cash obtained from the sale of the undeclared gold.  (A lot of it was off-ledger gold).
https://www.clintonfoundation.org/clinton-global-initiative/commitments/integrated-malaria-control-program-drc-papua-indonesia

“Clinton has done business with a certain faction of the Indonesian military for years—those who control access there.

“The Chinese had confirmed all of this and knew that the only way was to flood it out.  The tsunami was triggered by the Chinese.

“The tsunami was not possible—scientifically, that is.  It was all carefully done, and then blamed on faulty technology and a “weird” fault slip angle.  But that fault slip angle was “weird” (if you ask geologists) because it wasn’t natural.

“Communication systems can be manipulated.  That’s why it failed to show the third tsunami.  That tsunami warning system has worked ever since they got it developed after the 2004 Christmas disaster.

“There are non-visible lasers that have no color in the visible spectrum.  This goes beyond the DEW (Directed-Energy Weapons).  Beyond DEW is NON-visible laser.  The Chinese military are smart—this cannot be detected.  They took DEW technology and made it better.

“This was a direct hit from a Chinese non-visible laser satellite weapon.  It took out the Clinton escape residence, the entourage living there, and the underground bunker.  Unfortunately, there was serious collateral damage.”

The CIA sources say that close to $500 million in cash (not $270 million as was reported last week) was seized by Special Forces in the raid on that Clinton hideout before it was destroyed.  A Google Earth screen shot of the destroyed complex is below. 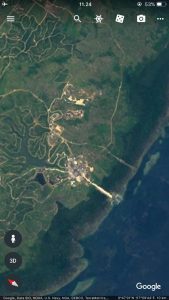 The money was divided “between a certain group of top-level white-hat Indonesian government officials—one of them being Vice President Jusuf Kalla—and Trump’s inner circle, military included,” the sources say.  So now we know why the generals got ricin mailed to them.

We have also been allowed to give our readers more information on one of our CIA sources.  He was in charge of the agency’s clandestine services in Jakarta working out of the U.S. Embassy from 1965-1985.

“When he was there, he told me there were only 20 American citizens permanently living in Jakarta.  All of them worked at the Embassy under diplomatic cover.  He told me, and this is a quote, ‘Our team escorted Bung Karno (President Sukarno) out of power and we installed Soeharto into power.’

“And yes, his team as well as Langley headquarters and other alphabet agencies were involved in assisting Soeharto in the killing of up to 1 million Indonesian Chinese that were labeled PKI (Partai Komunis Indonesia).  This was a well-planned takedown of all Soeharto’s so-called opposition.  It was planned with the Australian government as well;  they were heavily involved in this attempted genocide.  This was also about the time that Soeharto handed control of Freeport to the Agency.  There is so much more to this, but enough for now.

“I asked the cowboy why he did this;  his answer, ‘It was my job.  I worked for the U.S. government.  You did not ask questions back then.  If you did, you disappeared.’  He did tell me that he personally was involved in sending two cargo ships of rice to Kalimantan, as they had no food and the Dayaks and Malays were dying from starvation during this crisis, as all rice shipments from Jakarta were stopped.  (He did this with private personnel.)  And to add more, yes, he was close to the Bush Senior cartel back in the day.  He was part of the old guard.  Not many left now.”

On a final note, our source who is connected to the secret bases in Antarctica (he is a relative of Admiral Richard Byrd of Antarctic exploration fame) got back to us to insist that something really weird was happening there, saying the quote below from last week was true:

“Antarctica is opening up a WORMHOLE.  Yes, there is an ‘opening’ to other dimensions down there.  Due to the extremely high magnetic shifts going on in and near Antarctica, it’s literally ‘tearing a new fabric’ in the dimensional field.  THIS is the reason why ALL those government leaders went down there.  THIS is why they shut off Antarctica to the public and so forth.  The public only gets 5% of the ‘story.’  And now you have the other side.”

This source noted that even reputable publications like Scientific American were reporting, “There’s something mysterious coming up from the frozen ground in Antarctica, and it could break physics as we know it.”
https://www.scientificamerican.com/article/bizarre-particles-keep-flying-out-of-antarcticas-ice-and-they-might-shatter-modern-physics/

We will try again to visit Antarctica this Southern summer and report directly to our readers what is really going on there.  If there really is an anomaly like a wormhole opening up there, the entire population of the planet should be told and shown proof, not just a few leaders.

Vincenzo Mazzara, a Cavalier of the Teutonic Knights and a senior member of the Vatican P2 Freemason lodge, says preparations are being made for humanity to start building a fleet of ark ships and expanding out into the universe.
https://www.youtube.com/watch?v=-xpMcEBZqiY&feature=youtu.be

As usual, my reaction to this sort of stuff is to believe it when I see it.  For now, the White Dragon Society is working towards getting multi-trillion-dollar funding for an earth-based massive campaign to end poverty and stop environmental destruction.