A recent massive study review coordinated by 16 medical scholars and practicing MDs throughout England, Ireland, Italy, Japan, Sweden, and the USA has confirmed the falsity of the lipid theory of heart disease that blames cholesterol, and the disinformation and dangers of cholesterol-lowering statin drugs.

Its title is LDL-C Does Not Cause Cardiovascular Disease: a comprehensive review of current literature. LDL-C stands for low-density lipoprotein cholesterol, aka the “bad cholesterol”.

The final draft of this review was posted online by the journal Expert Review of Clinical Pharmacology on September 10, 2018.

The review authors spell out their intentions and generally summarize their findings in the review’s abstract:

[Despite over a half-century of cholesterol causing heart disease dogma] there is an increasing understanding that the mechanisms are more complicated, and that statin treatment, in particular when used as primary prevention, is of doubtful benefit.

The authors of three large reviews recently published by statin advocates have attempted to validate the current dogma. This paper delineates the serious errors in these three reviews as well as other obvious falsifications of the cholesterol hypothesis.

Our search for falsifications of the cholesterol hypothesis confirms that it is unable to satisfy any of the Bradford Hill criteria for causality and that the conclusions of the authors of the three reviews are based on misleading statistics, exclusion of unsuccessful trials and by ignoring numerous contradictory observations. (Emphasis added)

The Bradford Hill criteria were proposed by English statistician Sir Austin Bradford Hill in 1965 to transcend the “association is not causation” implications with statistical epidemiological studies. He proposed a set of nine criteria that were used to establish a connection between cigarette smoking and lung cancer. You can explore his nine criteria fully here.

Key Issues Addressed by the Review Authors Analysis of 107 Studies

Note: Familial hypercholesterolemia is a genetic disorder that leads to high blood levels of LDL, considered the “bad cholesterol” by conventional dogma.  PCSK-9 inhibitors are the latest drug type for lowering cholesterol in difficult cases, sometimes prescribed in addition to statin-type drugs.

The review noted an irony in the pro-lipid theory for statin use dogma. The first several years of statin recommendations were based on total cholesterol (TC) reduction. More recently the focus quietly shifted to LDL or LDL-C, low-density lipoprotein cholesterol as the menace that is certain to wreak cardiovascular health.

But this review blows that theory out of the water because the lipid theory of cholesterol clogging arteries from saturated fat consumption is completely false. It is a premise supported by biased trial reporting that minimize statin side effects, compliant mainstream media coverage, and pharmaceutical statin drug promotions.

Independent cardiologists and other health practitioners not ruled by the pharmaceutical industry and bad science dogma have come to realize arterial inflammation and heart muscle and valve disorders from different factors cause heart disease.

In addition to parsing the flaws and contradictions of pro-cholesterol and statin supporting studies within the 107 referenced, they point to other studies also referenced in this review that have been ignored because they do not support the cholesterol-heart disease dogma and question statin drug safety.

All of these references contain titles to the actual studies, which can be accessed online along with the details of all the issues addressed in their review.

Statin Scam and the Cholesterol Myth: Know the Truth

Perhaps the best documentary on the issue of saturated fats, cholesterol, and statin drugs shown once on Australian TV then banned, now here in its entirety.

Fat and Cholesterol are Good for You!
What REALLY Causes Heart Disease
by Uffe Ravnskov, MD, PhD 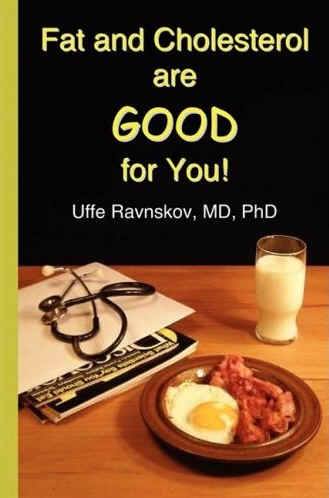