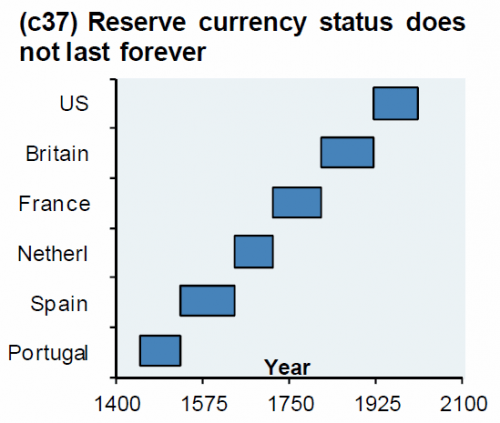 In a stunning vote of “no confidence” in the US monopoly over global payment infrastructure, one month ago Germany’s foreign minister Heiko Maas called for the creation of a new payments system independent of the US that would allow Brussels to be independent in its financial operations from Washington and as a means of rescuing the nuclear deal between Iran and the west.

Writing in the German daily Handelsblatt, Maas said “Europe should not allow the US to act over our heads and at our expense. For that reason it’s essential that we strengthen European autonomy by establishing payment channels that are independent of the US, creating a European Monetary Fund and building up an independent Swift system,” he wrote.

Maas said it was vital for Europe to stick with the Iran deal. “Every day the agreement continues to exist is better than the highly explosive crisis that otherwise threatens the Middle East,” he said, with the unspoken message was even clearer: Europe no longer wants to be a vassal state to US monopoly over global payments, and will now aggressively pursue its own “SWIFT” network that is not subservient to Washington’s every whim.

Many discounted the proposal as being far too aggressive: after all, a direct assault on SWIFT, and Washington, would be seen by the rest of the world as clear mutiny against a US-dominated global regime, and could potentially spark a crisis of confidence in the reserve status of the dollar, resulting in unpredictable, and dire, consequences.

However, despite the diplomatic consequences, Europe was intent on creating some loophole to the US ability to weaponize the global currency of account at will, something observed most recently as part of Trump’s latest sanctions on Iran, and as a result, late on Monday, the European Union said that it would establish a special payment channel to allow European and other companies to legally continue financial transactions with Iran while avoiding exposure to U.S. sanctions.

The move, as the WSJ notes, “is a direct rebuke of President Trump’s policy on Iran and his decision to withdraw from the nuclear deal in May,” and sets the stage for a confrontation between the U.S. and Europe over the treatment of Iran, the payment for Iran oil, and potentially, jeopardizing the reserve currency status of the dollar itself.

While keeping SWIFT as is, for now, the EU’s foreign-policy head Federica Mogherini side by side with Iran’s Foreign Minister Javad Zarif announced a “special purpose vehicle” jointly, in English and Farsi, after a meeting at the U.N. of the parties still committed to the deal—Iran, EU, U.K., France, Germany, Russia and China. In fact, everyone but the US.

According to Mogherini, the plan to create the SPV “will mean that EU member states will set up a legal entity to facilitate legitimate financial transactions with Iran, and this will allow European companies to continue trade with Iran” despite Trump’s opposition.

As Bloomberg’s Leonid Bershidsky explains, with Iran sanctions back, it is clear to the Europeans (as well as the Chinese and Russians) that any future transactions with Iran must go through entities insulated from the American financial system.

In a July 2018 report, Axel Hellman of the European Leadership Network think tank and Esfandyar Batmanghelidj of the Iranian company Bourse & Bazaar proposed “a new banking architecture” in response to the U.S. sanctions, relying on the existing system of “gateway banks,” such as the Hamburg-based Europaeisch-Iranische Handelsbank, and the European branches of private Iranian bank. “A further third category of gateway banks can be envisioned,” they wrote, “which would comprise of special purpose vehicles established by European governments, or as part of public-private partnerships in order to facilitate Iran trade and investment.”

The new plan focuses on this third option.

Mogherini further indicated that Germany, France and the U.K. would set up a multinational state-backed financial intermediary that would deal with companies interested in Iran transactions and with Iranian counter-parties. Such transactions, presumably in euros and pounds sterling, would not be transparent to American authorities. European companies dealing with the state-owned intermediary technically might not even be in violation of the U.S. sanctions as currently written.

And, in a potentially massive development, the system would be likely be open to Russia and China as well as it would enable the world’s economies to trade with each other, fully independent of SWIFT.

Europe would thus provide an infrastructure for legal, secure sanctions-busting — and a guarantee that the transactions would not be reported to American regulators.

That said, Washington would not be without recourse, although at that point, all the U.S. could do is sanction the participating countries’ central banks or SWIFT for facilitating the transactions (if the special purpose vehicle uses SWIFT, rather than ad hoc messaging).

That, Hellman and Batmanghelidj wrote, would be self-defeating: “There are two possible outcomes if these institutions proceed to work with Iran despite U.S. secondary sanctions. Either U.S. authorities fail to take enforcement action given the massive consequences for the operations and integrity of the American financial system, serving to “defang” the enforcement threats and reduce the risk of European self-sanctioning on the basis of fear, or U.S. authorities take such an enforcement action, a step that would only serve to accelerate European efforts to create a defensible banking architecture that goes beyond the Iran issue alone.”

Europe, naturally, needs a “neutral” pretext to implement this SPV, and that would be Brussels’ desire to continue transacting with Iran:

“We are not backing down [on the Iran nuclear agreement],” said a European diplomat. He said the speeches of European leaders at a Security Council meeting Mr. Trump is hosting on Wednesday on nonproliferation, including Iran, will reflect the Monday night statement.

Additionally, as basis for the potentially revolutionary development, the participants of the 2015 nuclear deal, formally known as the Joint Comprehensive Plan of Action or JCPOA, “underlined their determination to protect the freedom of their economic operators to pursue legitimate business with Iran.”

While the details of the SPV mechanism — which would be set up in future meetings with technical experts — were still to be determined, with the United States and the dollar dominating so much of global trade the statement said the new mechanism would “facilitate payments related to Iran’s exports (including oil) and imports, which will assist and reassure economic operators pursuing legitimate business with Iran.”

“In practical terms, this will mean that EU member states will set up a legal entity to facilitate legitimate financial transactions with Iran and this will allow European companies to continue to trade with Iran in accordance with European Union law and could be open to other partners in the world,” she told reporters.

As a result of Trump’s aggressive new sanctions on Iran, and potentially more sanctions after November as Trump hinted during his UN speech, European companies have been flocking out of Iran’s market and ending contracts to avoid risking U.S. sanctions.  Meanwhile, Iran – which has argued that the 2015 deal entitled the Islamic Republic to benefit from lifting of sanctions and to enter the world market – has seen its economy stumble, with the currency collapsing almost daily against the U.S. dollar since the U.S. exited the deal.

Telegraphing that Europe will continue cooperation with Iran despite US sanctions, Mogherini said Iran has remained fully committed to its obligations under the nuclear deal, as certified by a dozen reports from U.N.’s nuclear watchdog, the International Atomic Energy Agency. She also hailed the 2015 agreement as a major achievement for diplomacy and nonproliferation and “deeply regrets” what she called the unilateral withdrawal of the U.S. from the deal.

In any case, creating “a defensible banking architecture” may well be the end goal for the Europeans, China and Russia, anyway because, as noted above, Iran is merely a convenient pretext: after all, the nuclear agreement is one of the few things that unite the EU, China and Russia against the U.S.

But, as Bershidsky notes, “working to undermine the dollar’s global dominance isn’t ultimately about Iran at all. In his recent State of the European Union speech, European Commission President Jean-Claude Juncker called for strengthening the euro’s international role and moving away from traditional dollar invoicing in foreign trade.”

China and Russia have long sought the same thing, but it’s only with Europe, home of the world’s second biggest reserve currency, that they stand a chance of challenging American dominance.

While it remains to be seen if the “special purpose vehicle” would entice European companies such as France’s Total or Germany’s Daimler to get back into business with Iran remains to be seen, the optics of the move by the European Union together with China and Russia to defy the U.S. signaled continued criticism of the Trump administration for its decisions on Iran.

More importantly, it strikes at the heart of the current economic and financial system which is held together by the dollar. By providing an alternative, the global resistance sets the stage for what potentially could be the ascendancy of other global reserve currencies, and/or a world of bilateral trade agreements which bypass both the US Dollar and Swift entirely, eliminating Washington’s “veto powers” on global trade.

Given U.S. law enforcement’s wide reach, there would still be a risk involved, and European governments may not be able to protect the companies from it. Some firms will be tempted to try the new infrastructure, however, and the public isn’t likely to find out if they do.  In any case, in response to Trump’s aggressive foreign policies and “weaponization” of the dollar, it is worthwhile for Europe, Russia and China to experiment with dollar-free business.

But this brings up the bigger point: no currency’s international dominance has lasted forever, and there’s no reason for the U.S. dollar to be the exception to this rule.

Meanwhile, as Bershidsky concludes, “Trump’s confidence in his ability to weaponize the dollar against adversaries and stubborn allies alike could eventually backfire for the U.S. as efforts to push the dollar off its pedestal grow ever more serious.”