Between World War II and the Vietnam War, doctors in the United States believed it was a good thing to medically experiment on disabled people, people in mental hospitals and prisoners of the State.

They would often say it was being done for the “greater good.” Plus, these people had no recourse and couldn’t defend themselves legally nor sign consent. 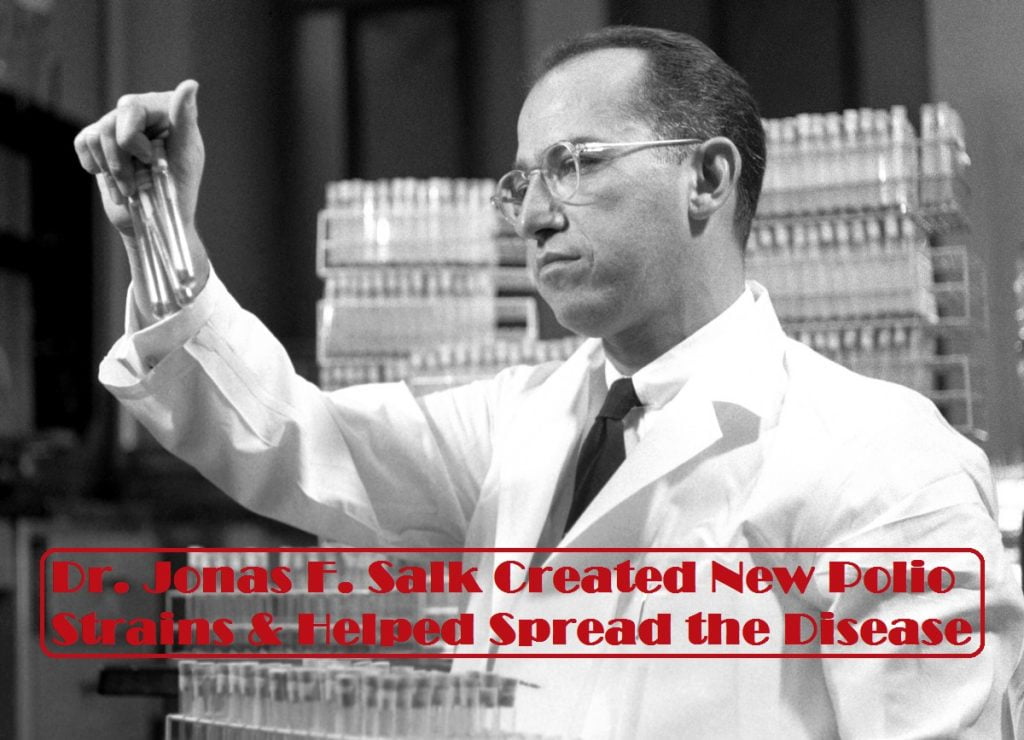 Of course, there is the well-known Tuskegee “study” where U.S. health officials observed over 500 African American men in Alabama who were already suffering from syphilis and while observing and tracking them – never gave them penicillin even though it was readily available then.

It was all about testing for cures, but at what cost?

The federally-funded study in 1942, where mental patients were injected with experimental flu vaccine, was co-authored by one Dr. Jonas Salk, who was given the label of polio vaccine inventor just one year later.

But true medical history now reveals that Dr. Jonas F. Salk, the “father of vaccines,” did not cure Polio, but actually created new strains and spread it with infected carriers.

For the first half of the 20th century, it was believed that Poliomyelitis virus could not be grown in tissue cultures, but then in 1954, a group of Harvard scientists, Enders, Weller and Robbins, won the Nobel Prize for physiology and medicine for exactly that – growing the virus in tissue cultures.

And because viruses require living tissue for their development, these scientists used Rhesus monkey kidneys, and Dr. Jonas F. Salk tested out his wild concoctions on the monkeys.

Within months, five major pharmaceutical firms helped Salk conclude that the concoction could work for humans, and the “formula” was handed over to Eli Lilly & Company and Cutter Labs in Berkeley, California.

Unfortunately, the formula was comprised of new strains of polio that Salk had helped create through wild experimentation, and this would soon be infecting the people that “science-based medicine” was supposed to be protecting from the very infectious disease they were getting injected by US doctors, and new strains of it at that. (2)

Since most Americans are not educated in schools about how infectious diseases virtually disappeared and were no longer a pandemic-type of threat by the time vaccines were invented, millions of people accept vaccines and flu shots as safe and effective, or at least until someone in the family suffers chronic vaccine damage and they read about the truth from true coverage that’s been memory-holed from mass media.

Most viruses, though, especially when combined in the same inoculation, are highly unpredictable, and the theory of vaccines being safe goes out the window from the start.

Dr. Salk simply removed the kidneys of rhesus monkeys, cut them up into miniscule pieces, and placed them into vials with his special “nutrient solution.”

Then the “genius scientist” rocked the bottles for extended periods of time, as one would rock a baby, but with a mechanical machine. This was said to be the incubator for the virus that stimulated growth.

The bottles were then chilled and shipped to laboratories to separate the kidney cells and dilute them with formaldehyde, to weaken the virus (this is when the virus goes dormant, waiting for food and virtually in hibernation mode).

Finally, three different strains of the virus are MIXED TOGETHER, the formaldehyde is neutralized with sodium bisulphate, and the virus is injected into live monkeys, mice and rabbits. Voila! Polio is announced to be cured one month later, although no humans were ever tested. This is what was injected into millions of children.

Once the multi-virus combination enters the muscle tissue and blood of a human, that person can “shed” the virus easily during the first few weeks via mucus, saliva, etc.

This is now scientific fact. The Polio virus inoculation is declared “safe, potent and efficient” early in 1955 and released as the new “miracle vaccine of the century,” all over the world. (3)

Immediately following the proclaimed prevention medicine for Polio, the Foundation for Infantile Paralysis ran press releases in all forms of available media that Dr. Jonas Salk invented and tested this miracle drug.

The foundation called for the manufacture of enough vaccines to inoculate over nine million children and pregnant women. American Press and Radio declared victory for Salk and the “greatest medical discovery of the century.”

This was the “carrier” and “shedding” effect that science would later discover that happens with measles, mumps and polio alike.

The vaccinated children became the new carriers, and Western Medicine would blame anything else in the name of saving Big Pharma and the new reign of invasive, carcinogenic, immune-compromising and neurologically-impairing medicine.

Then, on June 23rd, 1955, the American Public Health Service announced that there had been 149 confirmed cases of poliomyelitis among the vaccinated, including six deaths. In most of the cases, paralysis began in the limb which was injected.

The number of cases was far greater than if no injections were given at all. Polio had struck in areas where there had been no cases reported for over 9 months. The vaccine was suspended pending a full inquiry by the National Institute of Health (NIH).

Because a multiple-virus dose cannot be predicted in terms of multiplication capabilities once in the human body, the vaccines of modern medicine are severely flawed.

This is why the vaccine industry, CDC and the allopathic world refuse to run a true double-blind, placebo-controlled study contrasting vaccinated vs. unvaccinated children and reflecting the statistics of infection from those exact diseases for which children are inoculated against.

As true history reveals, when Diphtheria and Pertussis vaccines were introduced in the 1940’s, cases of paralytic poliomyelitis skyrocketed, and those injections therefore increased susceptibility to polio.

The majority of Americans believe, thanks to propaganda, that polio is one of the most serious of infectious diseases, when in fact, it is actually the least serious.

Most people incur mild infection lasting only a few days and there is only ONE rare complication of the disease that destroys motor cells in the brain and spinal cord, but EVERY government advertisement and warning uses paralysis as the scare tactic and fear-mongering coercion for people to accept vaccinations as safe and effective, or at least safer than being paralyzed by a scary disease only medical doctors can “understand” and “prevent.”

But if we ignore the propaganda and dig up the real statistics, then health enthusiasts who question invasive chemicals as medicine find real answers and can trust natural medicine even more so.

It has been observed since the early 1900s that an animal that survives an attack from poliomyelitis became resistant to subsequent infections. (4)

History shows us that human beings have very strong immune systems, even right from birth, if given the proper nutrition (including breast milk), and it has never been proven scientifically that injection of a virus or combinations of strains and viruses provides immunity in any way.

In fact, when multiplication of virus occurs, there is NO possibility of estimating the proper “dose” for a man, woman, child, infant, or the unborn child in a woman’s womb.

Therefore, inoculations cannot be simply “controlled” — and in immune-susceptible individuals leads to unforeseen results. Dr. Salk and his associates isolated more than 70 different strains of the three main types of polio, Brunhilde, Lansing and Leon. (5)

Unfortunately, Salk created new strains by mixing multiple others with the monkey kidneys. His final guess at the IPV vaccine was random, untested on humans, and never proven safe or effective.

Still, on April 12th, 1955, the Salk (IPV) Polio Vaccine Launch took place on the tenth anniversary of President Franklin Roosevelt’s death, and the Foundation for Infantile Paralysis told the world a big fat lie, using every possible means of publicity to spread the propaganda and catapult the vaccine industry as the new leader in medicine for infectious disease prevention.

Nearly every American newspaper declared that Dr. Salk had abolished poliomyelitis. It goes down in history as the ultimate SNAFU when polio carriers were created and “released” into the wild.

America is still injecting untested Polio vaccines into the muscle tissue and blood of hundreds of millions of Americans every year. (6)

Polio vaccine based completely on unwarranted fear and skewed statistics

Jonas Salk is famous because he is infamous. Review the facts and make informed decisions regarding vaccination based on the true history of medicine.

Before the modern era, polio was just a mild disease seldom resulting in paralysis and the largest epidemic occurred around 1950 and had significantly declined by 1955, when the vaccine was first introduced.

True causes of the spread of Polio are pre-polio vaccines, nutritional imbalances and pesticides, which contribute to immune deficiency.

Creation and promotion of Salk’s vaccine using propaganda was based on fear about losing research charities at the time. Test results of the Salk vaccine were also based on only data from the eleven (of the thirty three) US states that favored the statistics the industry desired.

When the vaccine first came out, it caused deaths and a rise in polio cases, but the detriment was covered up and the word “epidemic” was redefined. The polio cases that weren’t paralysis related were diagnosed by US doctors as meningitis.

Therefore, the factors that caused the decline of polio after 1950 did not include the Salk “miracle” vaccine at all.

In fact, the vaccine was one of the causes of disease. Salk himself testified later on before a Senate subcommittee that most of the polio outbreaks since 1961 were actually caused by Sabin’s oral polio vaccine.

He may have known this would happen all along, based on the fraud and misrepresentation he was taking part in. Large scale vaccination is a failure, and nobody can review the statistics because the CDC scrubs them from record.

Several respected scientists now believe the Salk and Sabin vaccines could be responsible for the major increase in leukemia in the United States, by combining and increasing strains, creating new forms of the disease using monkey kidneys.

In the Journal of Epidemiology and Community Health (August of 1997), it says that more than fifty percent of children lamed by poliomyelitis had already received THREE DOSES of oral polio vaccine BEFORE the onset of paralysis.

Still the “March of Dimes” will have one believe that polio is a rampant and violent crippler of a disease that can spread like wildfire and that the only way to be safe from it is to be injected with experimental combinations of wildly selected strains mixed with formaldehyde and aluminum.

Since 1950, polio outbreaks have mainly been caused by intensified diphtheria and whooping cough vaccinations and other pharmaceutical injections. There is even a name for it — provocation poliomyelitis. (7)