Prepare For Change
Home ARCONTES An Oil Spill You’ve Never Heard Of Could Become One Of The... 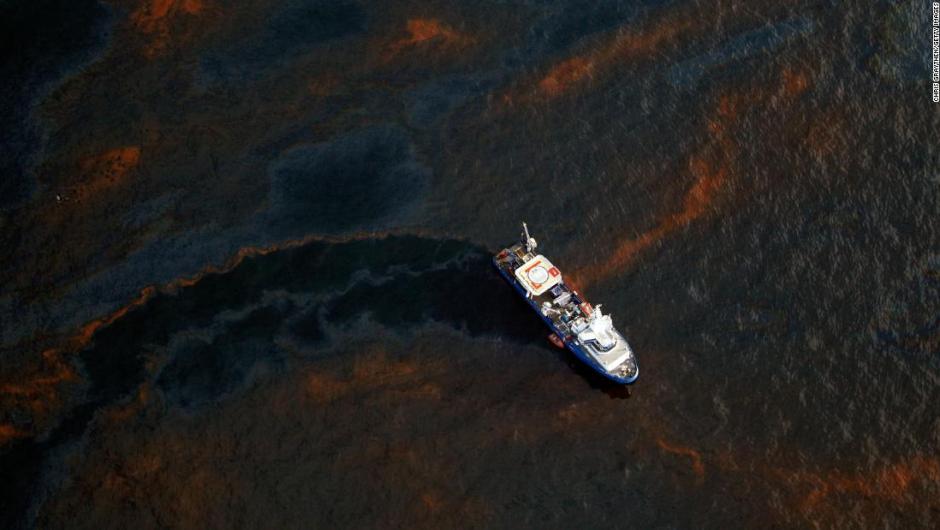 In 2010, the Deepwater Horizon oil tragedy commanded the nation’s attention for months. Eleven lives were lost and communities around the Gulf of Mexico ground to a halt under hundreds of millions of gallons of oil. Yet, lurking underneath the fresh disaster, an older spill was spewing ever faithfully forth: A leak that began when another oil platform was damaged six years earlier.

The Taylor oil spill is still surging after all this time; dumping what’s believed to be tens of thousands of gallons into the Gulf per day since 2004. By some estimates, the chronic leak could soon be larger, cumulatively, than the Deepwater disaster, which dumped up to 176.4 million gallons (or 4.2 million barrels) of oil into the Gulf. That would also make the Taylor spill one of the largest offshore environmental disasters in US history.

Trending
The Corona Jab Serum & It’s Effects On Human DNA & Brain Hacking! Are You Ready To Blow Your Mind?

In September, the Department of Justice submitted an independent study into the nature and volume of the spill that claims previous evaluations of the damage, submitted by the platform’s owner Taylor Energy Co. and compiled by the Coast Guard, significantly underestimated the amount of oil being let loose. According to the filing, the Taylor spill is spewing anywhere from 10,000 to 30,000 gallons of oil a day.

As for how much oil has been leaked since the beginning of the spill, it’s hard to say. An estimate from SkyTruth, a satellite watchdog organization, put the total at 855,000 to 4 million gallons by the end of 2017. If you do the math from the DOJ’s filing, the number comes out astronomically higher: More than 153 million gallons over 14 years.</

A community called to action

The Taylor spill started when an oil platform belonging to Taylor Energy was damaged and sank during a mudslide caused by Hurricane Ivan in 2004. However, it wasn’t until 2010, after the BP oil spill, that people really started to notice something was wrong. According to local activists, the warnings didn’t come from the Coast Guard, the government, or any oil company. They came from people around the Gulf community who simply saw it with their own eyes.
Revisit the BP oil spill, 5 years later 01:48
Marylee Orr is the executive director of the Louisiana Environmental Action Network (LEAN). She says in 2010, people conducting aerial surveillance near the BP oil spill started to notice another shape, a shadow of an oil slick adjacent to the main spill that didn’t seem to match up.
“They said it couldn’t have been coming from the BP spill, and sure enough, it wasn’t,” she told CNN. “It was coming from the Taylor Well.”
Orr says it was difficult for the community to get answers as to what was happening with the spill. Local organizations, including LEAN, began conducting flyovers of the area, compiling data and pressuring Taylor Energy for answers.
“We had to do a lot of research ourselves to find out about it,” she says. “How long is it? How wide is it? These are the things we struggled with. I feel like our organization, and other folks and other organizations, made it an issue.”
“In 2010, nobody really knew. And maybe no one would know now, if there weren’t citizens and non-profit organizations who were just trying to be good stewards,” she says.
In 2012, LEAN, along with the Apalachicola Riverkeeper and several other Louisiana environmental organizations, filed suit against Taylor Energy, kicking off years of litigation between activist organizations, the oil company and various government entities. Taylor settled the lawsuit with LEAN, et. al in 2015.
Taylor Energy liquidated its oil and gas assets and ceased production and drilling in 2008. CNN has reached out to Taylor Energy for comment and has not received a response.

In a 2015 complaint filed in relation to the joint suit involving LEAN, Taylor Energy claimed the sheen at the site of the Taylor spill was “residual” and “there is no evidence to suggest” an ongoing leak. The company also claimed it had been fully compliant with US Coast Guard regulations regarding the spill.

A problem floating right under the radar

John Amos, the founder of SkyTruth, says the Taylor oil spill is a problem that’s been well-known to people in the area for years, but for some reason or another hasn’t managed to stay the national conversation.
“This is one of those dirty little stories that has been hidden for too long,” he tells CNN. “That’s the problem with these chronic, slow-moving things. They don’t slap you in the face like the BP oil spill did.”
kyTruth has been compiling the Coast Guard’s data on the Taylor oil spill for years and using simple math to estimate the volume of oil being released.
The way it works, Amos explains, is that companies who are responsible for significant spills report the spill to the National Response Center, which is operated by the Coast Guard. The company then submits mandatory reports from regular aerial measurements of the spill, which appears to the naked eye as an iridescent sheen on the water.
To get a general idea of how much oil all of these measurements account for, Amos and his team combine the measurements with the estimated minimum thickness the oil needs to be to cast such a sheen. That number, they decided, was one micron: One one-millionth of a meter.
That one tiny, almost infinitesimal amount, expanded over thousands of feet and years of leakage, balloons to catastrophic proportions. In December 2017, SkyTruth put the composite estimate of the Taylor oil spill at 855,000 to 3,981,000 gallons.
That estimate, Amos says, is almost assuredly too low.
“The key weakness in our estimates is they are based on the reporting from the company,” he says — reporting that the Department of Justice has said was extremely under-representative.

Amos is familiar with Department of Justice’s commissioned report and says the analysis based estimates of the Taylor oil spill on satellite imagery, as opposed to Taylor Energy’s submitted reports. The discrepancies were severe. Some of the resulting measurements of the oil leakage were 17 times larger than Taylor Energy’s initial estimates.

An impact that’s hard to measure

While the numbers clearly show the Taylor oil spill is approaching, if not exceeding, the volume of the BP oil spill, that doesn’t mean the environmental impact is the same.
“This is oil that’s leaked out slowly and steadily over time, so the impact on the environment is very different,” Amos says. “One of the vexing things about the Taylor spill is that the consequences of this have been kept under wraps. There hasn’t been much public or political pressure to do the research to figure out what the damage is from a long-term, chronic leak.”

There are other impacts to consider as well: Impacts on corporate accountability, regulations and transparency in the oil industry and the viability and risks of offshore drilling, to name a few. At a time when the White House has expressed interest in expanding offshore drilling and various states have put forth strong plans of opposition — such as Oregon, where Gov. Kate Brown has just announced a plan to ban offshore drilling along Oregon’s coast, the Taylor oil spill is poised to remain a painfully relevant, if not overdue, touchstone.

Help Show This Ad to Tens of Millions of People!

The Benefits of Meditation for Children and a Steiner Education –...

Benjamin Fulford 5/10/21 Report: Without a Moral Compass the West Cannot...