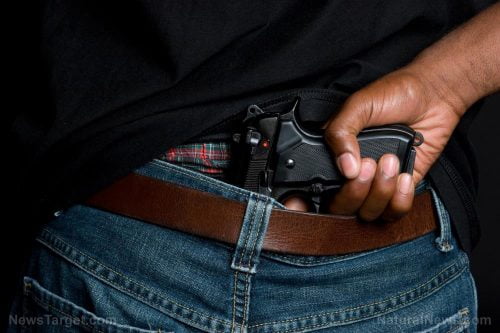 Warning: If you have not taken mind-altering prescription drugs yet, don’t, because if anyone has a good story, which can even be a total lie about you being a “danger” or “threat” to society in any way, all they need is a sympathetic judge, and then a swat team will be raiding your house in the early morning hours to take your guns. Should you resist, you will be shot to death on the spot, in your own home, even if you’ve never committed a crime, and all your guns are legally obtained.

Currently, there is an attempt to scrub all private U.S. medical records against gun owner registrars, so the Democratic gun-grabbing, soon-to-be-dominated House of Representatives can begin their full-fledged, Nazi-style gun confiscation agenda. Are you a “danger” to yourself or others? No? It doesn’t matter, because if someone else thinks or even says you are, then laws are growing roots that enable a tyrannical regime to remove, using force, that alleged threat.

Obama already set up a system to merge the vast federal data system for personal medical records with background check systems that directs the Attorney General to “review categories of individuals prohibited from having a gun to make sure dangerous people are not slipping through the cracks.”

If the Democrats have their way, American “healthcare” will include every gun owner registering every gun they own, and that will be followed by heavily armed confiscation of every private citizen’s guns, and we’re not just talking about automatic and semi-automatic weapons, because that’s just the “emotionally charged” beginning. If you’ve ever even spoken to a doctor about being stressed, depressed, anxious, or nervous, you will be the first to experience “protection” from yourself through gun confiscation and possible arrest. This is exactly how the “pharma gun trap” will function.

Anyone who takes any psych medication, even just once, including for ADHD, ADD, anxiety, or depression will be subjected to having all of their guns confiscated

You see, nearly every mass shooting in America over the past two decades has been committed by a young adult male taking psych medications, namely SSRI’s (selective serotonin reuptake inhibitors). These drugs block the normal production of dopamine and nerve impulses in the brain, causing extreme depression, massive anxiety, thoughts of suicide and homicide that eventually end up being carried out for real.

After these events occur, whether real or staged, the mass media never mentions prescription mind-altering drugs, yet still advertises them as “doctor recommended” during the commercials between the news propaganda.

Plus, all media is emotionally charged so Americans will then support a police-state nanny government that will come take the very weapons that prevent more gun violence from happening – as we see, only in alternative media coverage, plenty of cases where psycho shooters are gunned down by legal “carrying” folks in public places that are not “safe zones.” Democrats want nothing more than to disarm the masses using propaganda where people literally vote to lose their own Constitutional rights.

Whether by prescription drugs or “rumor” that you’re dangerous to yourself or others, the Democratic tyrannical regime, a.k.a. the “Deep State,” wants complete control. Funded by Big Pharma and the elite globalists that are currently running the Democratic-Socialist-Communist Party, all social media, Google, YouTube, the television networks, most major newspapers, and major propaganda websites, if the Senate is overrun in two years by this insane mafia-style mob, then mass gun confiscation will ensue immediately.

No doubt, there will be many, many more mass shootings all over the country, and many of them will be designed, promoted and staged by the FBI and leading Democrats.

On November 5, 2018, the “Red Flag” gun law already claimed its first victim in Maryland, where a 61-year-old man with no criminal history (who was described by his own family as harmless) was shot to death by police at his own front door at 5 a.m. because someone made a phone call and simply claimed they thought he was a threat. This law allows anyone, including family members, neighbors, or healthcare providers, to petition a state court to order the “temporary removal of firearms” from a person who “may” present a danger to others or themselves. This event is just one of over 100 “red flag warrants” that have already been served in Maryland based on hearsay.

Ever seen the movie with Tom Cruise called “Minority Report?” This has become a reality in the United States, where “thought crimes” are being pursued by rogue police states that seize guns and kill people because someone said you might do something bad one day.

Tune into BigPharmaNews.com for more current events about Big Pharma and the insane Democrats trying to medicate everyone so they can take away our guns.