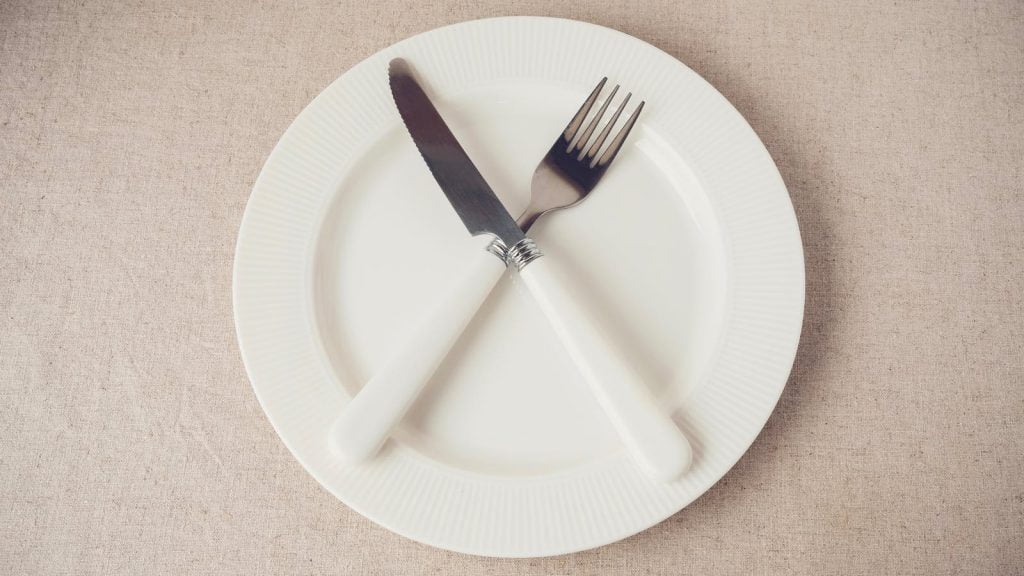 Involuntary periodic starvation or its voluntary counterpart, fasting, have been part of human nature since the beginning of time. Until relatively recently, food was not always available. To survive, early humans needed to store food energy as body fat to survive the hard times. If we did not have an efficient storage and retrieval method of food energy, we would have died long ago.

After food availability became more reliable, most human cultures and religions specified prescribed voluntary periods of fasting. For example, Jesus was said to have fasted for 40 days and 40 nights, and many subsequent followers have undertaken this themselves without significant health damage. Many Muslims fast during the holy month of Ramadan, and also regularly twice a week during the rest of the year. Fasting was considered a cleansing procedure without any connotation of harmful muscle burning.

The repeated feeding-fasting cycles did not seem to have any detrimental effect on muscle mass. Descriptions of traditional societies such as the Native Americans or Inuit or tribesmen in Africa suggest they were lively and energetic, not emaciated and weak. Descriptions of modern followers of the Greek Orthodox Church, with its many days of fasting do not include portrayals of lethargy and weakness. It is virtually impossible that humans were designed to store food energy as body fat, but when food was not available, we burn muscle. This would mean that all peoples up to the 20thcentury following this feast-famine cycle either through periodic starvation or fasting would be almost pure fat. Instead, they were lean and strong.

Recent clinical evidence bears out the fact that repeated fasting does not cause muscle loss. In a 2010 study of alternate daily fasting, patients were able to lose significant fat mass with no change in lean mass. In this schedule, subjects eat normally on feeding days, and alternate that with a day of fasting. In addition, numerous metabolic benefits, such as reduced cholesterol, triglycerides and waist circumference were noted along with the weight loss. 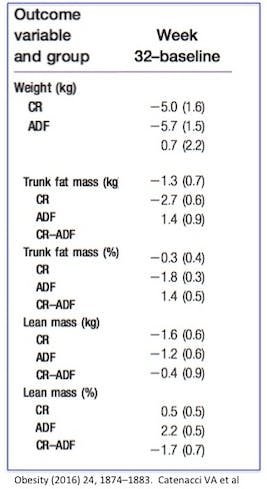 Despite the concerns that fasting may cause loss of muscle, the long human experience as well as human clinical trials show the exact opposite. Intermittent fasting seems to preserve lean tissue better than convention weight loss methods. Thinking again about gluconeogenesis, at first glance, this seems counterintuitive. If intermittent fasting causes gluconeogenesis (turning protein into glucose) how can it possibly be better at preserving muscle? Part of the answer lies in the fact that gluconeogenesis does not start until approximately 24 hours after the last meal. The other part of the answer lies in the hormonal adaptation to fasting – the counter regulatory surge.

The effect on glucose metabolism is also opposite to one another. Where insulin drops blood glucose by encouraging storage of food energy, counter-regulatory hormones encourage the use of stored food energy and an increase in blood glucose. Insulin pushes the body towards storage of glucose and body fat, and counter regulatory hormones push the body toward usage of glucose and body fat.

Your pupils dilate, your heart rate increases, and your body pushes glucose out into the blood for use as a ready source of energy. This is an extreme example, but a milder form of sympathetic nervous system activation happens during the early fasting period. The hormones cortisol, adrenalin and noradrenalin are released into the blood as part of the general activation of the body for action.

Contrary to many people’s expectations, fasting, even for prolonged periods of time does not cause the body to shut down, but rather to ramp up and get ready for action. This is due to the energizing effect of these counter-regulatory hormones. Even up to 4 days of fasting results in an increase in resting energy expenditure (or basal metabolic rate). This is the energy used for generating body heat, by the brain, heart, liver, kidneys and other organs. When measuring the energy used for metabolism, studies show that after four days of fasting the body is using 10% more energy than at the beginning of the fasting period. Most people mistakenly believe that the body shuts down during fasting, but the opposite is true. Fasting does not make people tired, it gives them more energy.

During fasting, the body is merely switching fuel sources from food to stored food energy, also known as body fat. Imagine we are cave men and women. It’s winter and food is scarce. We haven’t eaten for 4 days. If our body begins to shut down, then it will be even harder to find and hunt for food. We would fall into a vicious cycle. Every day we don’t eat means that it is that much harder to get the energy to hunt or gather. As each day passes, our chance of survival progressively worsens. The human species would not have survived. Our bodies are simply not that stupid.

Instead, our body switches fuel sources and then pumps us full of energy, so that we have enough energy to go and find food. Basal metabolism increases, we increase sympathetic tone, and increase noradrenalin so that we can hunt. The VO2, a measure of the metabolic rate at rest, increases in conjunction.

The other noteworthy counter-regulatory hormone that increases significantly during fasting periods is growth hormone. Studies show that fasting for 1 day increases growth hormone by 2-3 times. Growth hormone secretion continues to increase even up to 5 days of full fasting. At first, this seems counter-intuitive. Why would we want to increase growth at a time where we are not eating?After all, growth hormone does exactly what the name implies. It tells the tissues of the body to growth bigger and taller. If there are no nutrients available, why grow?

The answer is found by following our body through the entire feeding-fasting cycle. When we eat, glucose and amino acids are absorbed and transported to the liver. Insulin is secreted, telling the body to store the incoming food energy (calories). This is the fed state. Glucose is used by all the tissues of the body and the rest is stored in the liver as glycogen.

Blood glucose begins to fall several hours after a meal, leading to a decrease in insulin secretion and signaling the start of the fasted state. As described above, the body goes through a predictable set of adaptations to fasting or starvation. Liver glycogen is mobilized and broken down to individual glucose for energy. Gluconeogenesis transforms some proteins into glucose. The body begins to shift from glucose metabolism to fat metabolism. During this time growth hormone is increasing, but no proteins are being synthesized because insulin and mTOR levels are low. So little growth is actually happening, despite the high GH levels.

Once you eat, or break the fast, the body goes into the fed state once again. After a long fast, growth hormone is high and because amino acids are now plentiful after the meal, our body rebuilds all the necessary proteins to replace those that were broken down. Insulin stimulates protein synthesis. So, now, in the refed state, the body has high insulin, high growth hormone, amino acids, and glucose for energy – all the components it needs to build or rebuild protein. This process, just as with autophagy, represents a renewal process, as the body breaks down unnecessary protein preferentially, and rebuilds the most necessary ones. Fasting in this sense, rejuvenates the lean tissues. 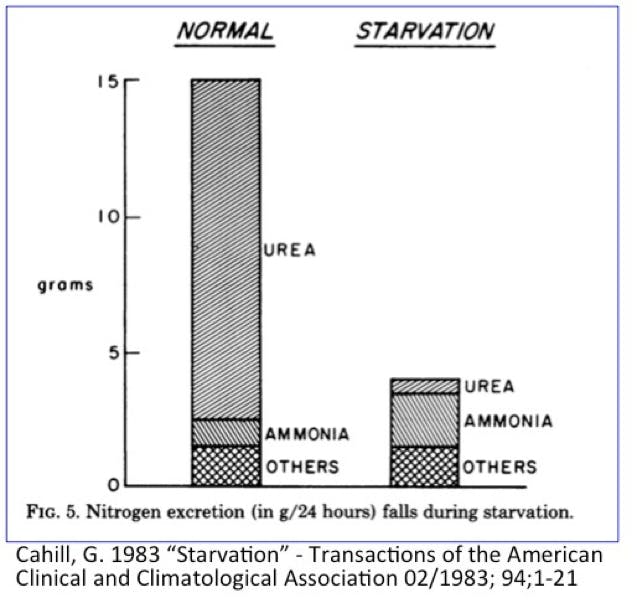 Under conditions of fasting, the body has several priorities. The first priority is to maintain sufficient glucose for normal brain functioning. Glucose requirements are substantially lowered as the liver and muscles switch to fatty acids, and the brain switches to ketones. Some of the glycerol from fatty acids are able to be converted to glucose, but there is a limited amount. The rest must be delivered by gluconeogenesis, so there is still a small amount of protein breakdown. However, this protein is not specifically muscle cells. Instead, the proteins that turn over the most rapidly are the first proteins to be catabolized for glucose. This includes the skin and intestinal lining. In over five years at my Intensive Dietary Management program (www.IDMprogram.com), which uses therapeutic fasting for weight loss, he has not yet referred a patient for skin removal surgery despite patients losing over a hundred pounds. Immune cells also have a high turnover, and may be reduced, accounting for some of the anti-inflammatory effect seen clinically. Muscle cells, which turn over infrequently, are relatively spared. Overall, protein catabolism drops from approximately 75 g/day to only 10-20 grams per day. This preserves protein during prolonged starvation.

But, is this low level of protein breakdown a bad thing? Not necessarily. If you compare a lean person to an obese one, it is estimated that the obese person contains 50% more protein. All the excess skin, connective tissue holding up the fat cells, blood vessels to supply the extra bulk etc is all made up of connective tissue. Consider a picture of a survivor of a Japanese prisoner of war camp in World War II. Is there any excess skin on that body? No, all this extra protein has been burned for energy, or to maintain more important functions. 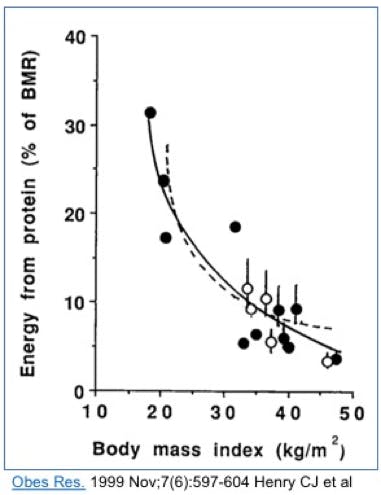 This may be the power of autophagy, the cellular recycling system that powerfully influences health. During fasting, which necessarily includes protein deprivation, the nutrient sensor mTOR is reduced, which stimulates the body to break down old, dysfunctional subcellular parts. Upon refeeding, the body build new protein to replace the old in a complete renovation cycle. Instead of keeping old parts around, you are newly synthesized ones. Replacing old parts with new ones is an anti-aging process.

There is a significant difference in protein metabolism between lean and obese subjects. During prolonged fasting, obese subjects burn 2-3 times less protein is 2 to 3-fold compared to lean subjects. This makes perfect sense. If people have more fat to burn, their bodies will use more of it. If there is less fat, people will be forced to rely on protein. This holds true not only for humans, but also animals. Over 100 years ago, it was shown that the proportion of energy derived from protein was lower in animals with more body fat (mammals, geese) compared to lean animals (rodents, dogs). If you have more fat, you’ll use it. Thus, while obese subjects have more overall protein, they will lose it at a slower rate compared to lean. 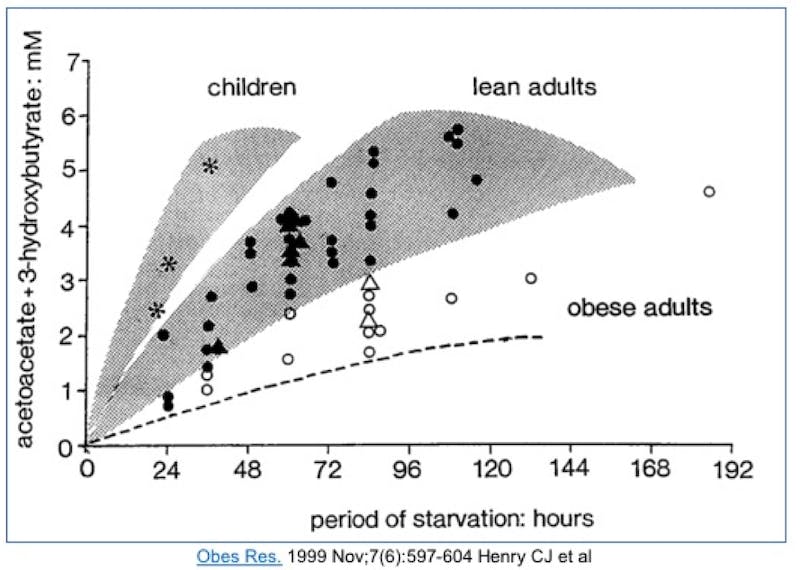 Exactly how much protein is needed during fasting really depends upon the underlying condition. If you are obese, then fasting is very beneficial and you will burn much more fat than protein. If you are quite lean, then fasting may not be so beneficial, as you will burn more protein. This seems rather obvious, but our body is really quite a bit smarter than we give it credit for. It can handle itself during feeding, and during fasting. How exactly the body is able to make this adjustment is currently unknown.

There are other differences between lean and obese subjects, too. Lean subjects increase their ketone production much quicker than obese. This is easily understood. Since lean subjects burn a proportionally higher amount of protein, they switch over the fat metabolism much sooner than obese subjects, which will have the effect of sparing protein.