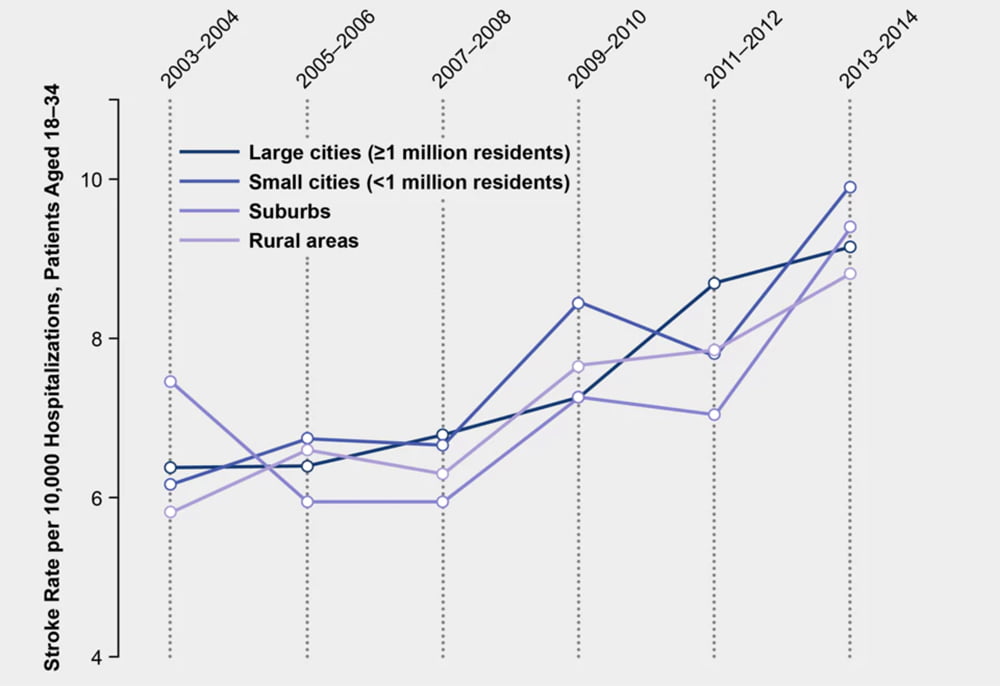 A stroke is a medical condition in which poor blood flow to the brain results in cell death and part of the brain not functioning properly. There are two main types of stroke:

In 2015, stroke was the second most frequent cause of death after coronary artery disease, accounting for 6.3 million deaths worldwide (11% of the total). About half of people who have had a stroke live less than one year.

Signs and symptoms of a stroke may include an inability to move or feel on one side of the body, problems understanding or speaking, dizziness, loss of vision to one side, or a severe headache. When that happens, get medical help immediately.

Strokes affect mainly older people, not the young. Overall, two thirds of strokes occurred in those over 65 years old. But more U.S. millennials — young adults 18 to 34 years old — are getting strokes.

In a study published earlier this year in JAMA Neurology, researchers at the U.S. Centers for Disease Control and Prevention (CDC) found that strokes among millennials increased from 2003 to 2012 by 32% for women and 15% for men.

Ralph Sacco, president of the American Academy of Neurology, remarked that although the evidence suggests that the overall incidence and mortality of stroke is on the decline, the rates may be increasing among younger populations: “The reasons for these trends are not entirely clear,” but there are concerns about obesity, diabetes, physical inactivity, and drug use “having a greater impact in younger stroke victims.” (PBS)

Scientific American conducted a further study of strokes among millennials, using data from the U.S. Department of Health and Human Services’ Agency for Healthcare Research and Quality (AHRQ).

Here are the study’s findings:

Mitchell Elkind, a stroke expert at Columbia University and New York–Presbyterian Hospital who reviewed the Scientific American study, points out the troubling implications of increasing numbers of millennials having strokes: