Prepare For Change
Home ARCONTES The Ruling Elites Love How Easily We’re Distracted and Turned Against Each... 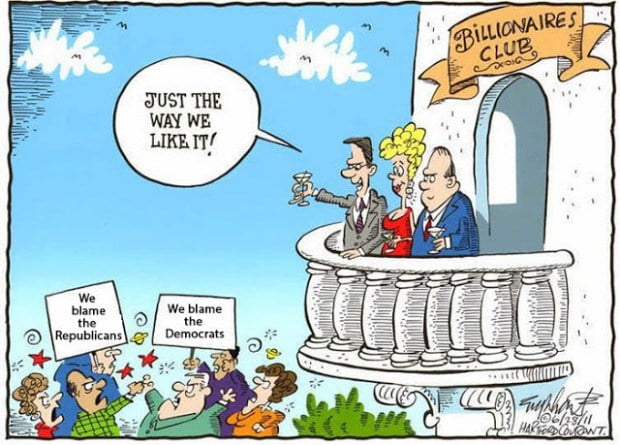 Let’s say you’re one of the ruling elitesoperating the nation for the benefit of the oligarchy. What’s the best way to distract the populace from your self-serving dominance in a blatantly neofeudal system?

1. Provide modern-day versions of Bread and Circuses to distract the commoners from what actually matters: “the golden age of TV” and binge-watching; a cultural obsession with glorifying oneself via selfies posted on Facebook and Instagram; tweeting outrage and indignation on Twitter; a corporate-state media which magnifies insignificant events into social crises, political “leaders” who intentionally inflame polarization and conflict and so on.

Combine all these distracting circuses into one 24/7 system-overload, and what do you get? A populace so distracted, so stressed, so emotionally dazed that they are unable to focus on the predatory exploitation of the ruling elites, much less figure out how to change the neofeudal status quo.

2. Divide the populace with calculatedly divisive cultural issues and turn the commoner class against itself: with no middle ground and no shared class identity allowed, the populace is easily sliced and diced into angry, disaffected tribes who blame whomever media propaganda has targeted as “the other” for the nation’s woes.

Correspondent Jonathan Twombly recently posted a description of this divide-and-conquer strategy of the ruling elites:

I eschew conspiracy theories because I don’t feel humans are smart enough or cohesive enough to pull them off. Usually self-interested people pulling in the same direction create the conditions that some people view as conspiracies.

With that preface stated, it seems to me that Right and Left elites, who share the common goal of making the world work for themselves, and who do not have to live with the consequences of their policies, have co-opted non-elite people with cultural and social issues meant to distract them from what’s going on economically.

None of these things – religion, nationalism, political correctness, multiculturalism, feminism, anti-racism, etc. – are necessarily bad in themselves, particularly in moderation.

However, to distract people from having the economic wool pulled over their eyes, they need to be amped up into a public shouting match, which is what we see happening in media outlets controlled by, you guessed it, the elites.

The Old Left was concerned with bread and butter issues and extracting a bigger piece of the economic pie from the elites. The Old Right, in turn, was concerned with order and the stability of the system, and was prepared to give up some of the pie in order to stave off the pitchforks.

However, the stateless super-rich of the New Left-Right Elite Alliance no longer need to buy off the non-elites with money.

They have no fear of the pitchforks because they can flee behind bodyguards (private armies as in the Middle Ages are coming) or gated communities, or they can flee the country in an instant if they need to, taking with the large chunks of their wealth, which is now either offshore or mobile thanks to international banking. They have become insulated from the consequences of their policies.

The non-elites are mad as hell, but don’t know exactly where to direct their anger, because the social and cultural issues the elites have used to co-opt the non-elites are also incredibly effective at keeping the left and right non-elites in a constant state of anger at each other.

The Elite’s greatest fear is that left and right non-elites realize who their real enemies are, and that their fighting with each other over cultural issues is what the Elites want them to be doing.

Well said, Jonathan, thank you for the succinct summary of these control mechanisms.

The era we’re entering – a disintegrative winter – lends itself to discord and the decline of common ground, as I addressed two years ago in A Disintegrative Winter: The Debt and Anti-Status Quo Super-Cycle Has Turned.

We can see this is the rise of cultural, social, financial and political polarization:

Huxley spoke of loving our servitude: if we let the ruling elites distract and divide us, then we will in effect be choosing to love our servitude.

No wonder the ruling elites love how easily we’re distracted and divided against ourselves: it’s so easy to dominate a distracted, divided, blinded-by-propaganda and negative emotions populace.