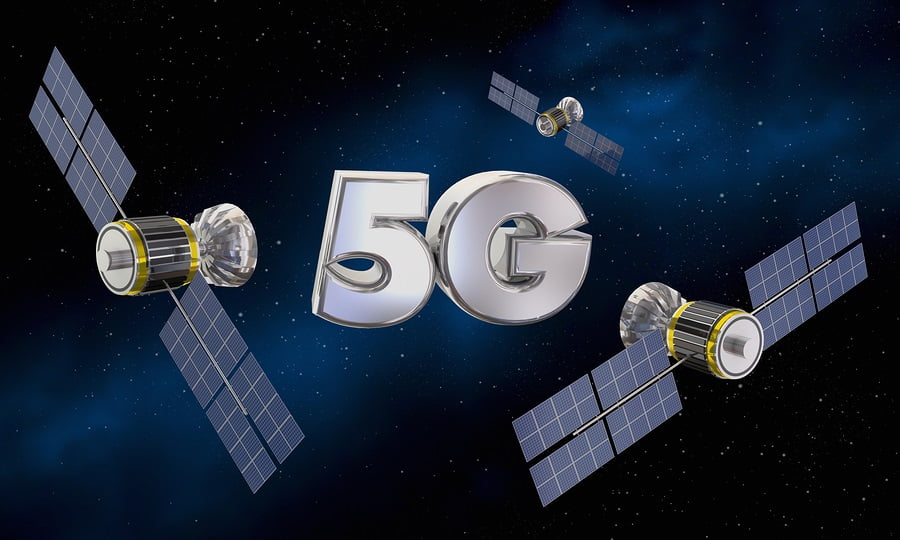 Public attention about 5G has been focused on the plans of telecom companies to install millions of small cell towers on electric utility poles, on public buildings and schools, on bus stop shelters, in public parks, and anywhere they want in national parks and on federally owned land.

In local urban communities there would be a cell tower approximately every 500 feet along every street.

As bad as these small cell towers might seem from the standpoint of constant exposure to radio frequency (RF) radiation in close proximity to the source, perhaps an even more alarming prospect will be the beaming of millimeter length microwaves at the earth from thousands of new communication satellites.

The total number of satellites that is expected to be put into low and high orbit by several companies will be 20,000 satellites. [1]

These satellites will use the same type of phased array antennas as will be used by the ground-based 5G systems.

This means that they will send tightly focused beams of intense microwave radiation at each specific 5G device that is on the Earth and each device will send a beam of radiation back to the satellite. [2]

Previous generations of RF cellular communication used large antennas to send a blanket of radiation in all directions. The lower frequencies they used and the broad distribution of microwaves limited the numbers of cellular devices that could connect through an individual tall tower.

The much shorter length microwaves used for 5G will make it possible to use small phased array antennas to send and receive signals.

Phased array antennas consist of clusters of hundreds of tiny antennas that work together to shoot a ray of energy at a target just like a bullet. A cluster of these tiny antennas can be arranged in a 4 inch by 4 inch matrix.

The rays of microwaves they produce will be strong enough to pass through walls and human bodies. If they were not strong enough to do this, then everyone with a 5G smartphone would have to stand outside when using the devices. [2]

Each 5G product will also have multiple phased array antennas which will be used to create a powerful beam of radiation back to the 5G devices mounted on electrical utility poles or toward a specific satellite in space.

These beams of radiation will also need to be strong enough to pass through walls and human flesh such as a hand or head to reach the intended destination. [2]

This means that if you are in a crowded location, such as an airport or on a train, there will be hundreds if not thousands of invisible beams of radiation flying through the environment at the speed of light.

As people move in that environment, their bodies will be penetrated by numerous beams of radiation as they walk or as other people walk around them with their 5G smartphones. [2]

5G Phones will be much more Powerful than Previous Phones

The effective radiated power of the 5G phased array antennas in phones will be 10 times more powerful than 4G phones.

No one will be free from exposure.

In addition, 5G beams of microwave radiation will be received and transmitted from new computer equipment, household appliances, and automobiles.

Stationary equipment such as Wi-Fi hubs in homes and offices will be permitted to use microwave beams that are 15 times stronger (300 watts) than the signals from 5G phones or 150 times stronger than 4G phones. [2]

Why is 5G so Much More Dangerous than Previous Microwave Communication Systems?

Arthur Firstenberg, author, researcher, and advocate for limiting RF exposure from the environment, explains the analysis of 5G radiation that was published in Microwave News in 2002. He stated:

When an ordinary electromagnetic field enters the body, it causes charges to move and currents to flow.

But when extremely short electromagnetic pulses enter the body [5G], something else happens: the moving charges themselves become little antennas that re-radiate the electromagnetic field and send it deeper into the body.

They become significant when either the power or the phase of the waves changes rapidly enough.

5G will probably satisfy both requirements. This means that the reassurance we are being given—that these millimeter waves are too short to penetrate far into the body—is not true. [2]

5G Satellites Will Fill the Skies

These are the companies with the biggest plans to deploy satellites:

Arthur Firstenberg describes the plans of corporations who want to use 5G technology. He states:

Honeywell has already signed a memorandum of understanding to become OneWeb’s first large customer—it plans to provide high-speed Wi-Fi on business, commercial, and military aircraft throughout the world.

SpaceX would like to provide the equivalent of 5G to every person on the planet. [3]

Ground-based 5G systems are already being implemented in dozens of major cities right now. Plans are being approved by hundreds of other cities, which will allow implementation in 2019 and beyond.

As I explained in my previous articles, cities do not have the right to “say no” to 5G. FCC regulations prevent cities from objecting on the basis of health concerns – they only can speak to issues of esthetics and the practical matter of the placement of equipment.

They are required to “say yes,” and they better do it quickly, or telecom companies will threaten them with legal action for obstructing their plans. 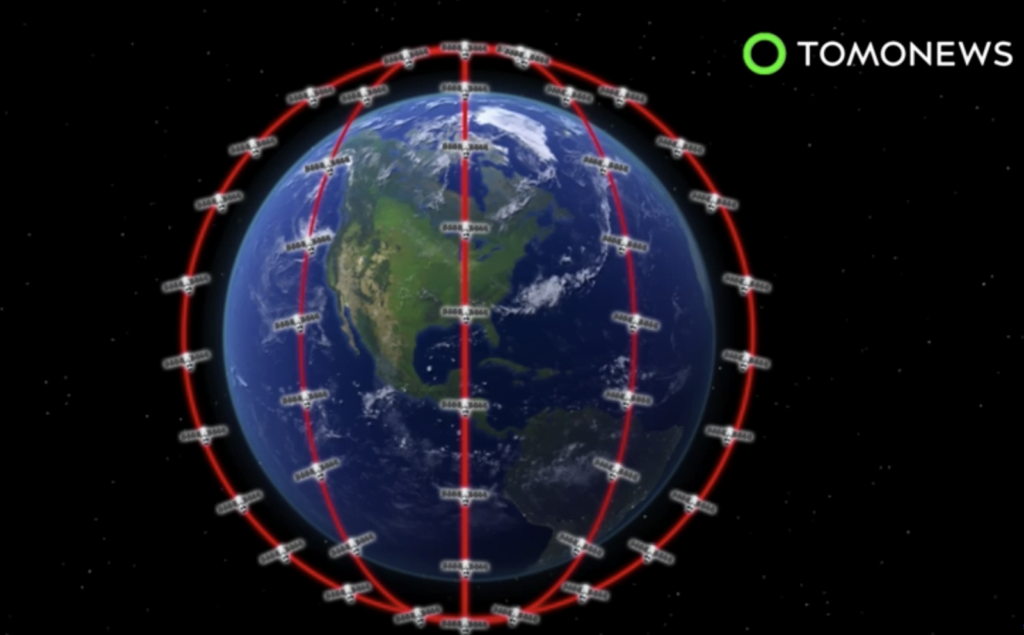 The first two 5G test satellites were launched by SpaceX in February of 2018. Hundreds of other satellites are expected to be launched in 2019. The full set of 20,000 satellites could be put in orbit during the next two years.

To put this into perspective, as of September 2017 there were 1,738 operating satellites into orbit around the Earth. This means the number of satellites will be 11 times greater than the current number. [4]

Rocket fuel is very destructive to the Earth’s ozone layer which protects us from the harsh effects of radiation from the sun. In 2017, there were 90 rocket launch attempts worldwide. [5]

If the number of annual rocket launches increases by 10 or more times, which is likely under the plans these corporations have made, computer models suggest that the combination of ozone depletion and release of black soot could produce a 3 degree warming effect over the Antarctic and reduce the ozone in the world’s atmosphere by 4%. [3]

Even though it will be possible for a single rocket to put multiple satellites into orbit, we are still talking about a 10 or 20 fold increase in environmental damage over what is being produced today. [3]

The 5G satellites have a relatively short lifespan, perhaps only 5 years, which means there will be high numbers of rocket launches, not just in the next few years, but in every year for the foreseeable future. [3]

Mercury-based Rocket Fuel Could Spread Neurotoxins Over the Earth

As bad as liquid and solid rocket fuels will be for the environment, Apollo Fusion is developing a mercury-based propulsion system for launching rockets.

These ion propulsion rocket engines use powerful magnets to push away small charged particles at high speeds, which generates thrust. NASA experimented with mercury ion propulsion in the 1960s, but abandoned the research.

Mercury is an extremely strong neurotoxin, which is harmful to all forms of life, especially humans.

The risks of an environmental catastrophe are monumental, because if there was a malfunction and one of these engines exploded, highly toxic mercury would be spread through the atmosphere and over the Earth. [6]

All the talk from telecom companies about 5G being a panacea for environmental protection and energy conservation is quite ridiculous when we think about the environmental damage that will be created by any of the rocket engines they choose to use for launching their satellites.

Space Junk will Pollute the Earth

Each satellite will be the size of a small refrigerator and will weigh approximately 880 pounds. [4]

With a life expectancy of only 5-years [3], this means there will be a massive amount of space junk orbiting the Earth.

Eventually, all those satellites will fall down to Earth and will burn up as they enter the Earth’s atmosphere.

All the hazardous materials in the satellites will be released into the air and will float down to the ground as dust or in droplets of rain.

5G is promoted as being the next great wonder in the plan to advance technology to create smart cities where everything and everyone is instantly connected in real time with no lags or lost signals.

Of course there will be a few costs.

Everyone will be irradiated with millimeter-size, non-ionizing radiation 24 hours a day with completely unknown health effects.

Studies designed to investigate harm from 5G will be completed many years after the 5G systems on the ground and in space are fully implemented.

At that point it is very unlikely that telecom companies would dismantle their systems even if it is shown that their technology is causing cancer and other diseases. They would just deny the risks.

Millions of people will suffer from radiation exposure with symptoms such as headaches, weakness, brain fog, impaired ability to learn and reason, chest pain, and numerous other symptoms that will baffle most conventional physicians.

There is Nowhere to Hide from 5G Radiation

Today, it is possible to live in a location that has reduced levels of microwave exposure. This is accomplished by choosing a living space that is far away from cell phone towers.

However, in the near future, it won’t matter where we live, because 5G will irradiate us wherever we happen to live or work.

FCC regulations have been structured in such a way that local municipalities cannot stop telecom companies from installing 5G. They are specifically prohibited from trying to delay or stop 5G implementation on the basis of health concerns. Their only recourse is to try to make the ground-based 5G system somewhat more esthetically pleasant.

Based on what has been happening around the country, telecom companies are sweeping aside local resistance and gaining approval for their 5G systems in rapid succession.

Can 5G Implementation be Stopped?

As far as I can tell, at this point, the only way that 5G will be stopped will be by congressional action. If enough people raise a stink with their elected officials, then perhaps 5G could be put on hold while studies are done to examine the true health risks.

Telecom investment in 5G has been massive. They are planning full implementation on the ground and in space in the next couple years. The time to object is now and not after hundreds of thousands of people become sick. [7]

If you would like to watch an in-depth presentation on the risks and hazards of 5G, then please view the following presentation.

Listen to Arthur Firstenberg discuss the history, science, and description of 5G, including 5G from satellites in space and its expected effects on all living things: