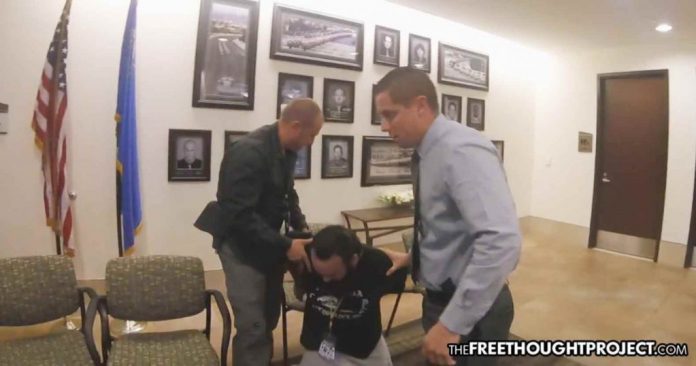 “Congress shall make no law respecting an establishment of religion, or prohibiting the free exercise thereof; or abridging the freedom of speech, or of the press; or the right of the people peaceably to assemble, and to petition the Government for a redress of grievances.”

Las Vegas, NV — A rather disturbing situation unfolded in Las Vegas on Wednesday as two independent journalists—attempting to exercise their First Amendment right of the press—were arrested and cited for trespassing. Joey Lankowski, Kelly Patterson, and Ronald Mecklosky were at the Las Vegas police station attempting to cover a press conference about one of their officers shooting at a man for holding a cane.

Lankowski tells the Free Thought Project that he’d been in contact with the Metropolitan Police Department so he could get the details of another press conference over police shooting another man and attend it. However, according to Lankowski, officials from the department lied to him and refused to tell him when the actual press conference would take place and held it in secret on Monday.

On Wednesday, Lankowski eventually found out through a source that this new press conference would be held on Wednesday, so he, Mecklosky and Patterson grabbed their cameras and went down to the station.

The interaction was captured on multiple cameras and the video is nothing short of infuriating. As Lankowski enters the room in which dozens of other journalists are allowed, he is quickly approached by police who tell him he is not part of the media and must leave.

Clearly, these officers have forgotten their oaths they swore to uphold the Constitution which protects Lankowski’s presence in that room to cover the event as media.

As the Public Information Officer approaches Lankowski, he begins degrading him and telling Lankowski that he is not a part of the media. To be clear, Lankowski is a journalist for Nevada Cop Block and also hosts a weekly podcast for the group. By all standards, what he is doing is being the media.

What’s more, the fact that the officer didn’t recognize this fact is irrelevant as his rule book, the Constitution, guarantees this right.

Nevertheless, as other media outlets continue to fill the room, the officer tells Lankowski that he needs a “credentialed” media pass to be in this public space to report on a public press conference.

As Lankowski continues to resist leaving the press room, he is approached by more and more officers who all fail miserably at upholding their oath to the Constitution.

Eventually, because Lankowski refused to be denied his First Amendment right, he was physically taken down, handcuffed, arrested, and cited for trespassing—on public property, in a press conference, doing his job as a journalist.

According to the the Police Department’s public information office, Lankowski was removed because he was not credentialed by them. To be clear, you do not need a press “credential” to take pictures or cover events in public places. Where Lankowski and the others were, is a public space.

However, because the police department gets to pick and choose the people who ask them questions, Lankowski was arrested.

Although they could not cite a Nevada statute that prohibited these independent journalists from covering the press conference, the department will likely produce some internal document that demands anyone allowed in must be first approved by the department.

As these folks are unafraid of asking hard questions, like “why an officer felt it necessary to start shooting at a man holding a cane from 65 feet away, endangering the lives of innocent bystanders,” it is not likely that they will be granted these privileged “credentials.”

Indeed, as we have seen before, independent journalists have been thrown out of LVMPD press conferences for simply questioning the official narrative on the Vegas shooting and actually catching them in lies.

Both Lankowski and Patterson were arrested and cited on Wednesday for trespassing as dozens of other media outlets who are accepted into the official club did the exact same thing they tried to do. If ever you were unsure of how the establishment feels about independent media, the video below should clear up any doubts.

When police officers get to pick and choose who gets to ask them questions, and deny people “credentials” for asking real questions, we have a problem. Transparency and accountability are the underpinnings of a free society and when public servants start kidnapping people for upholding these important measure s, tyranny is not far behind.

If you think Lankowski and other independent media outlets should be able to attend these press conferences and peacefully ask questions just like the rest of the media, feel free to reach out to the LVMPD Public Information Office at (702) 828-4082 to let them know they should be.

Matt Agorist is an honorably discharged veteran of the USMC and former intelligence operator directly tasked by the NSA. This prior experience gives him unique insight into the world of government corruption and the American police state. Agorist has been an independent journalist for over a decade and has been featured on mainstream networks around the world. Agorist is also the Editor at Large at the Free Thought Project, where this article first appeared.

“Congress shall make no law respecting an establishment of religion, or prohibiting the free exercise thereof; or abridging the freedom of speech, or of the press; or the right of the people peaceably to assemble, and to petition the Government for a redress of grievances.”